Diving Into the Mystical Underwater Photography of Michael David Adams

Robin De ClercqApril 11, 2017
"Lucid Descent" by Michael David Adams
Home
FEATURED
Michael David Adams and his wife, Viktorija, have always had love and respect for the water, from the gorgeous, exotic beaches and the smell of rain to the vast allure of the sea. Growing up, Adams studied martial arts for 10 years, and to this day lives by a Bruce Lee quote he discovered in his youth: “Be like water…,” Lee said, because according Adams, “Water always knows what to do and where to go. It adapts and survives everything, it gives life, yet it also can take it away.”
Today, Adams is a New York-based photographer who showcases his love for water by combining it with his passion for photography. He’s shot for both international and U.S. versions of popular magazines, such as Harper’s Bazaar, ELLE, and Glamour, and has led fashion and travel photo shoots around the world. We caught up with Adams to learn more about what it’s like to shoot beneath the sea.
Somewhere along the way, you apparently became interested in underwater photography, which is quite a niche area. Can you tell me about that?
On my honeymoon in Croatia in 2010, my wife’s friend from her youth, who is a scuba instructor and underwater nature and wildlife photographer, introduced me to underwater photography. She took us to an ancient shipwreck off the coast of the Omis, where my wife grew up. The depth was only around 10 feet, so we could easily hold our breath and get to the bottom with the help of a weight belt. The surface of the water that day was very choppy, yet when you got underwater it was calm and serene. It was there, standing on the bottom of the sea in the crystal clear waters of the Dalmatian Coast, a place where the human body is not supposed to be, with schools of fish swimming around me, that I became obsessed with taking my personal style of photography to the underwater world and making it a reality. Photographing for intentional results underwater can be very challenging, but the imagery you can achieve is unmistakable. Well-executed underwater fashion photography is beyond inspiring to say the least.
You and your wife, Viktorija, are also a husband and wife photo team. Can you tell me about that?
Viktorija and I started our careers independently, but we met early on and developed our skills, talents and vision together. Creating images and all sorts of things together has been the underlying theme of our relationship and is one the joys in our life. One main goal of ours is to always better ourselves, personally and professionally, so we have the respect and ability to be more honest with each other about our shoots and what we would like to achieve, or what we can improve on in the future, perhaps more so than other creative partners. Having been born on the Dalmatian coast of Croatia, Viktorija has always had a love for water too, but it’s more me that had the desire to explore it as an environment for photography. We’re excited to work together on anything, and the thrill of water work is an added bonus. 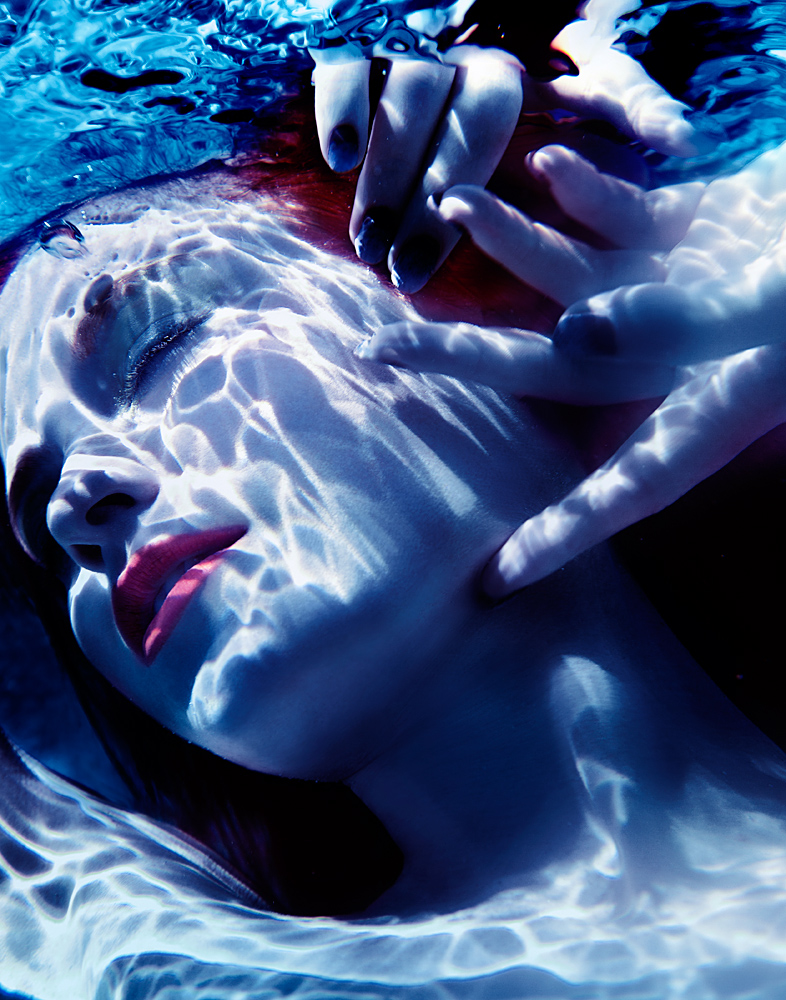 “Sent From Above” by Michael David Adams

Have you ever encountered any dangerous situations, especially working with models that are perhaps untrained, on underwater shoots?
When shooting underwater, safety is the utmost importance. Many things have the potential to go wrong or not as planned on any shoot, and working underwater raises the level of things to be prepared for. On my first shoot, I had a scare for myself, when in a moment of exhaustion, I almost couldn’t get back up to the surface when I needed to breathe. I was in only about 4 feet of water but was practically laying down on my back on the bottom and I had weights on my arms, as I hadn’t known fully yet the best places to wear weights.  I didn’t realize how tired I was, but couldn’t get my footing to get up. I had a minor panic moment, but quickly realized I needed to calm down and just roll over to get feet and legs under me. So having experienced that myself, I always make sure the models and crew are safe and explain everything to them about the shoot requirements and safety aspects of working underwater.

“The project is our way of interpreting fairly tales and folklore in ways that visually speak to us.”

I don’t always use compressed air to breathe when I shoot.  It really does help, but if not everyone is using air, it can potentially be a little bit of a communication barrier between the photographer and models. If I’m the only one who has air, I still like to start out the day with the models doing breathing exercises for them to get the hang of controlling their heartbeats and breathing to keep them relaxed. It can be exhausting work and confusing at times, so communication is really important.

You’ve built an impressive portfolio of underwater work. Is there a particular shoot or image that stands out to you?

I’m super in love with the SnowDrop series I’ve just finished. I had a vision of depicting SnowDrop, which is the original title of what’s become known as Snow White, while she was unconscious in the forest after being poisoned. I’ve wanted to begin incorporating my underwater photography into our Story-Tellers project, so what better way to show a person in suspended animation then to be floating underwater.
I also really love the Breath from Another series, a story of lovers who depend on each other to share their breath of life. I enjoy working with multiple people, capturing the interactions or tensions between them. I definitely want to shoot more multiple people underwater in the future. 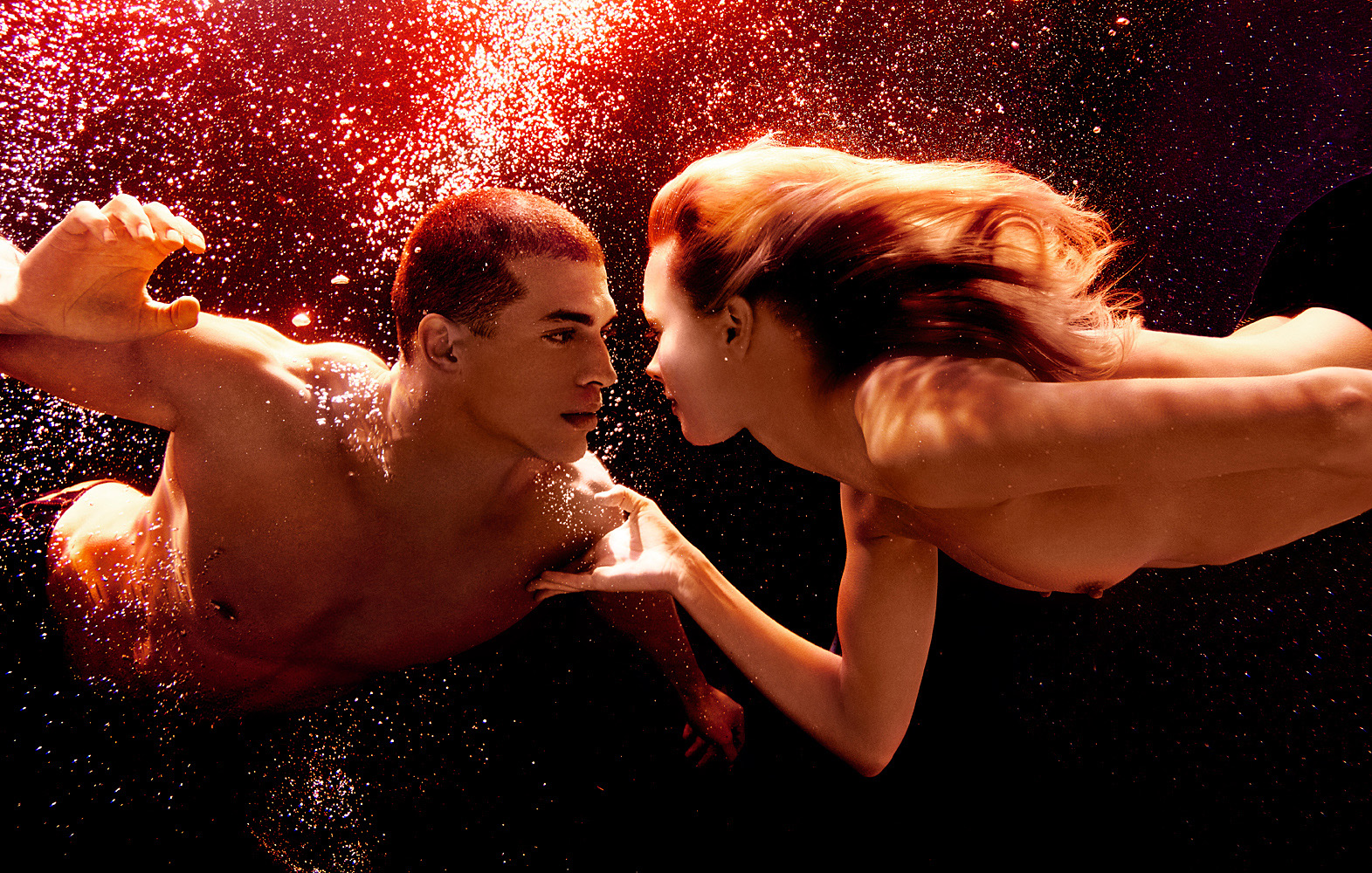 “Breath From Another” by Michael David Adams

On your website, you say Story-Tellers is “a very special project by the husband and wife team.” What makes it so special?
This project is special for many different reasons. The first one is for our daughter who is 2-and-a-half years old.  She has brought so many wonderful things to our lives, so projects like this take on new meanings and understandings. Viktorija, having grown up in Eastern Europe, was raised with a respect and teachings of fairytales and folklore that isn’t really taught too much here in the U.S. anymore.  She was shaped by Hans Christian Andersen stories and various Grimm fairy tales, among other local folklore. Unfortunately, during the war in former Yugoslavia, that precious book was lost and she always had a dream of creating her own book as an homage to her childhood and others who grew up with fairy tales and legends as learning tools.

The project is our way of interpreting fairly tales and folklore in ways that visually speak to us, and ways that we would love to see. Our lives in the industry have always been about telling stories through photography, either in the realm of fashion or beauty or commercially in advertising. This project allows us to approach image-making from a more artistic side of the craft. Although we still love to incorporate fashion and the other industry specialties we have access to, this project is also very much about collaboration of artists and creative minds. 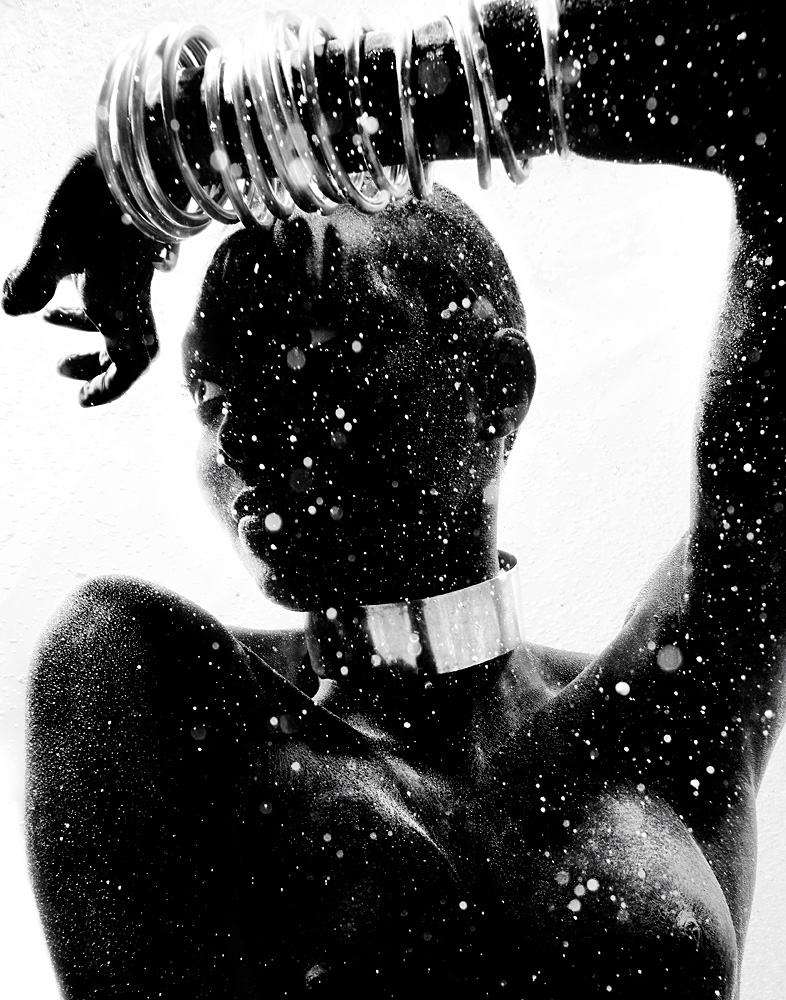 Can you elaborate more on some of the specific stories and tales you’re interpreting?
The concept of the project is not strictly stories that have been previously written or documented, for example, the first image we did is a vision of Viktorija’s, which she called “Rush.” She wanted to portray what it felt like when you’ve been emotionally frozen for a long period of time, and something or someone comes along to help bring those inner butterflies back to life and bring color back into your world. Another one of her concepts we brought to life is called “When I grow up,” which is the dreams of a little girl who sees herself breaking free from her cage that holds her, flying free with the birds among the vibrant colors of her new and future world.
The very latest image I finished is a concept I photographed with our daughter. A friend in Croatia, who is also a photographer, asked if I would participate in an upcoming show for National Geographic, where photographers he knows from around the world would contribute an image to a projection wall installation that pertain to his overall show. The images all show a person with a finger to their lips, to say “shhh,” and is a comment and contemplation on global warming for an Earth Day event. I immediately knew I wanted to use our daughter as the subject to represent youth and the future of the planet, as well as a composition of NYC buildings with the tide rising around her. It was great to photograph her as well as the city, and perfect for our project with such an important and relevant message behind it. 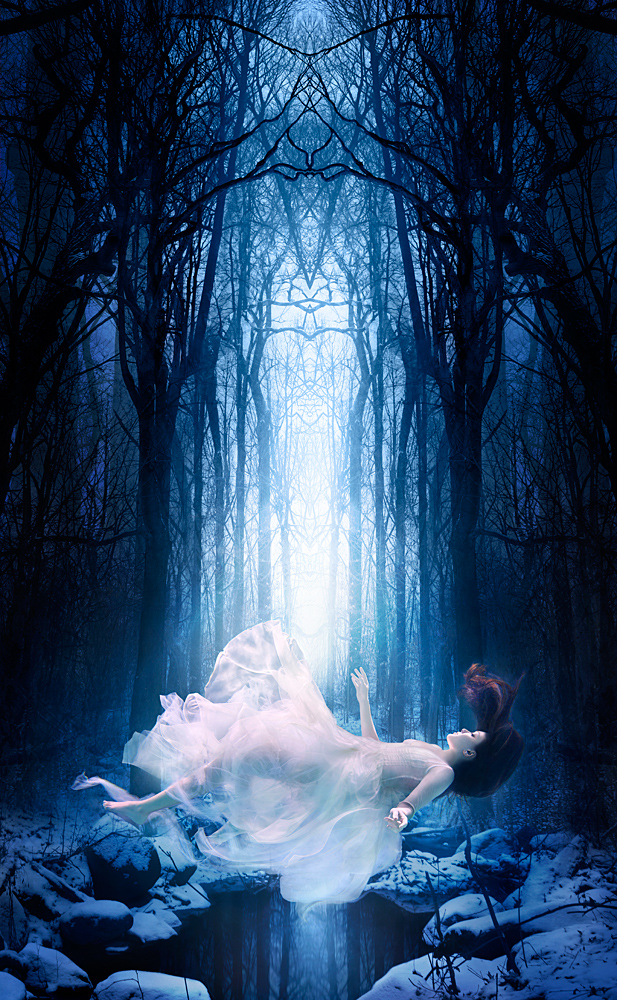 “The Witching” by Michael David Adams

Can you tell me about the post-production process behind your work?
Post-processing can be a big part of some of the images from the project, but it depends on what the vision is for the final image. I’m not opposed to composition work and even enjoy the aspect of the images being a new “multi-media” endeavor, but I do try to get most of “the shot” in camera when ever possible. For example, the image of  “When I Grow up” is photographed all in-camera. For that image, we collaborated with the amazing costume designer, Miodrag Guberinic, who designed the headpiec, (as well as created the butterflies for “Rush,” and Viktorija painted the watercolor background, then created the makeup to feel the same as the paintings, as if she was painted too. I do, however, have a lot of ideas that have to be done as composites, as it’s impossible to do otherwise or without a million dollar budget.
“Snowdrop,” which was partly a collaboration with the New York Fashion designer Morgane Le Fay, took a bit of time to do from concept to finish. I photographed the forest during December two winters ago, and then had to wait to do the underwater part until it was warm this past summer. I did have tree branches in the water for the closer shot, but then as the editing process progressed, my vision for the shot concept became much more than originally planned, so more post-processing than originally thought went into that one as well.
We have another image series coming, which we photographed in Venice while on a Fashion shoot. It will also become a composite shot with other elements needed to make it convey what I have in mind, being that we really couldn’t close down Saint Marks Square for a few days. But that would have truly been amazing to do and would have had stories of its own!
Check out Adams’ underwater site for more of his work.