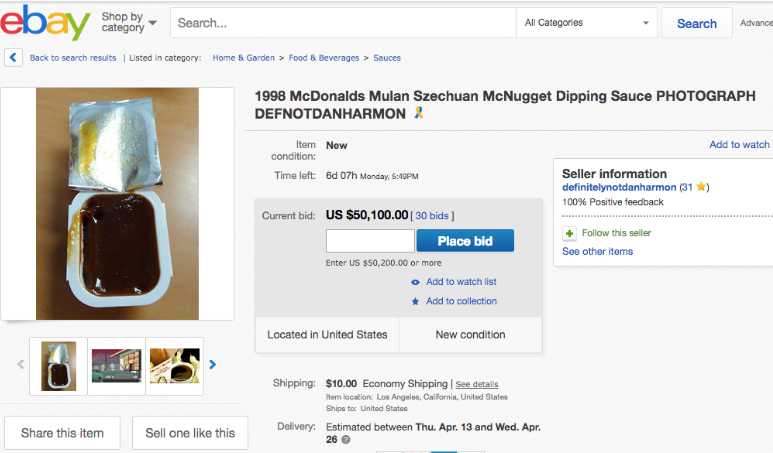 Photos of Photos of McDonalds Sauce Are Selling on Ebay For Over $50,000

“The two most important requirements for major success are: first, being in the right place at the right time, and second, doing something about it,” McDonalds Founder Ray Kroc once said. It’s now been more than 60 years since the launch of this American fast food chain, and the creators of ‘Rick and Morty’ are apparently still heeding his words.

After the third season premiere of ‘Rick and Morty’ dropped unannounced on April Fools Day, which drew nostalgia to McDonald’s promotional Szechuan-flavored sauce—a 1998 tie-in to Disney’s ‘Mulan’—the internet exploded, and so did Ebay. As of yesterday, April 4, bids reportedly reached over $50,000 for a photo of a photo of the sauce, not even the sauce itself.

The listing was posted under the username “DefinitelyNoteDanHarmon”—Dan Harmon is one of the creators of the show—and described it as “printed shoddily on plan paper and sent in an ordinary envelope.” It also claimed all proceeds would be donated to Habitat For Humanity and ambiguously stated, “there may or may not be other things that happen to you because you win this auction,” leading some to believe a secret prize was in store for the highest bidder.

As of now, the listing, despite a 100% positive feedback rating from the seller, and others like it, have been taken down. This excludes sellers actually attempting to sell packets of the sauce, at prices ranging from $.99 to $700.

This isn’t the first time obscure listings have blown up on Ebay. In 2005, there was the man who reached £12k in bids for ‘Absolutely Nothing’ before Ebay pulled the listing. Or, there was the pizza that vaguely resembled Jesus that actually sold for $153.

And yet, what the #szechuansauce trend says is how important it is to anticipate “being in the right place at the right time,” especially when it comes to content marketing. Great job on this one, Dan Harmon. I’ve never tried the sauce, but I watched the episode and I’m lovin’ it.