David Firth, the creator of the viral series “Salad Fingers,” has veered away from scratching rusty spoons to meticulously applying a cure-all cream in his new animated film, “Cream.” Released in partnership with Flying Lotus on the musician’s Brainfeeder Films, it will surely have you shaking in your skin.

“The time has come for CREAM – the latest product that will fix your life,” reads the video description by Firth. “This is the story of Dr. Bellifer, a scientific genius, who after years of smashing particles together, reveals his revolutionary new product: a cream with the power to fix all of the world’s problems.” 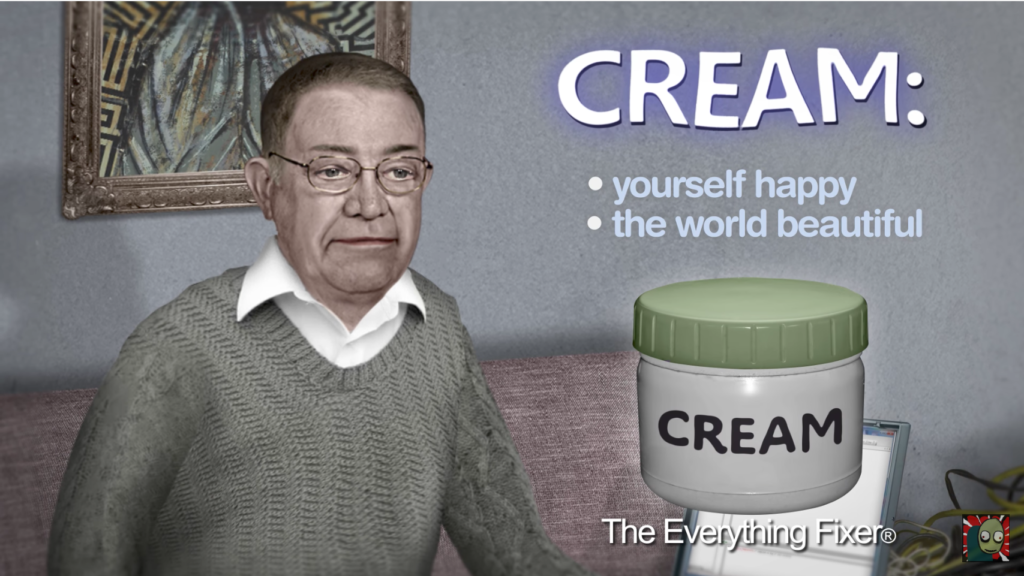 CREAM, after a six year process, has the power to alter molecular structure to fix everything from general ugliness to broken limbs to death. But CREAM fixes more than just human’s physical appearances—it can alter the human mind to go from dull to brainiac with just a simple injection. Everything—even technology—can be fixed with just a dab of CREAM.

The 12-minute film reveals something terrifying to today’s audience. With such a simple, generic name, the animated CREAM resonates to products on today’s market. New technology wants to be your singular product to easily streamline your life in one simple step. Products such as Amazon Echo or Google Home, for example, make it easy to listen to music, control the temperature of your home, and answer life’s seemingly pressing questions. 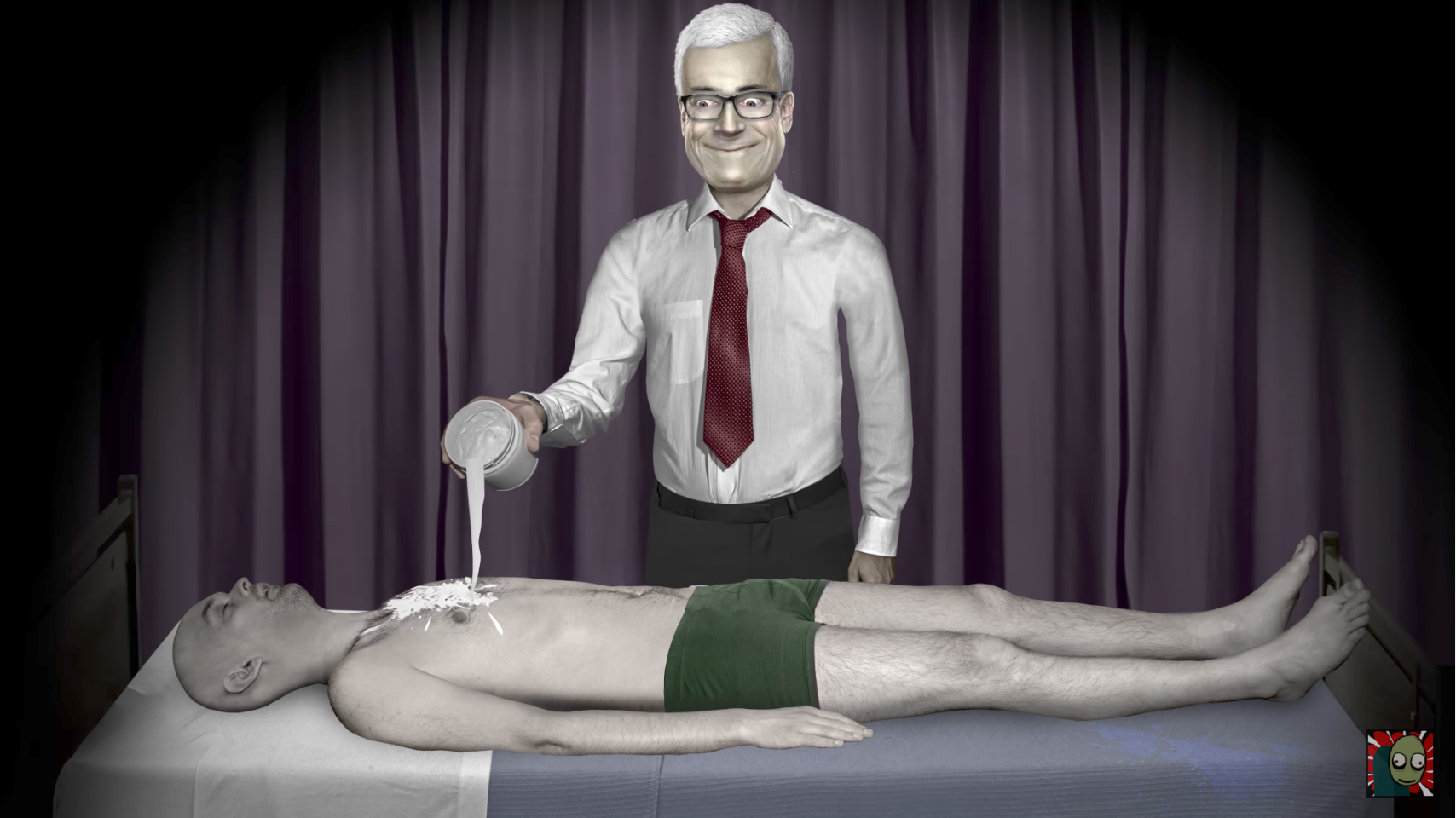 With the high demand of these “do-it-all” products, companies may eventually run out stock and are scrambling to meet market demands. CREAM comes across this same issue, in which the company runs dry of the invincible raw material. Customers soon discover the fix-all cream was only a quick, temporary fix when it becomes linked to death, AIDs, cancer, and even terrorism.

Perhaps a bit extreme, the products we use and rely on hold the same reign of terror. Ever leave your phone in an Uber? Well, if you have, you know that the loss of your device results in all hell breaking loose as the safety of our precious information is threatened. 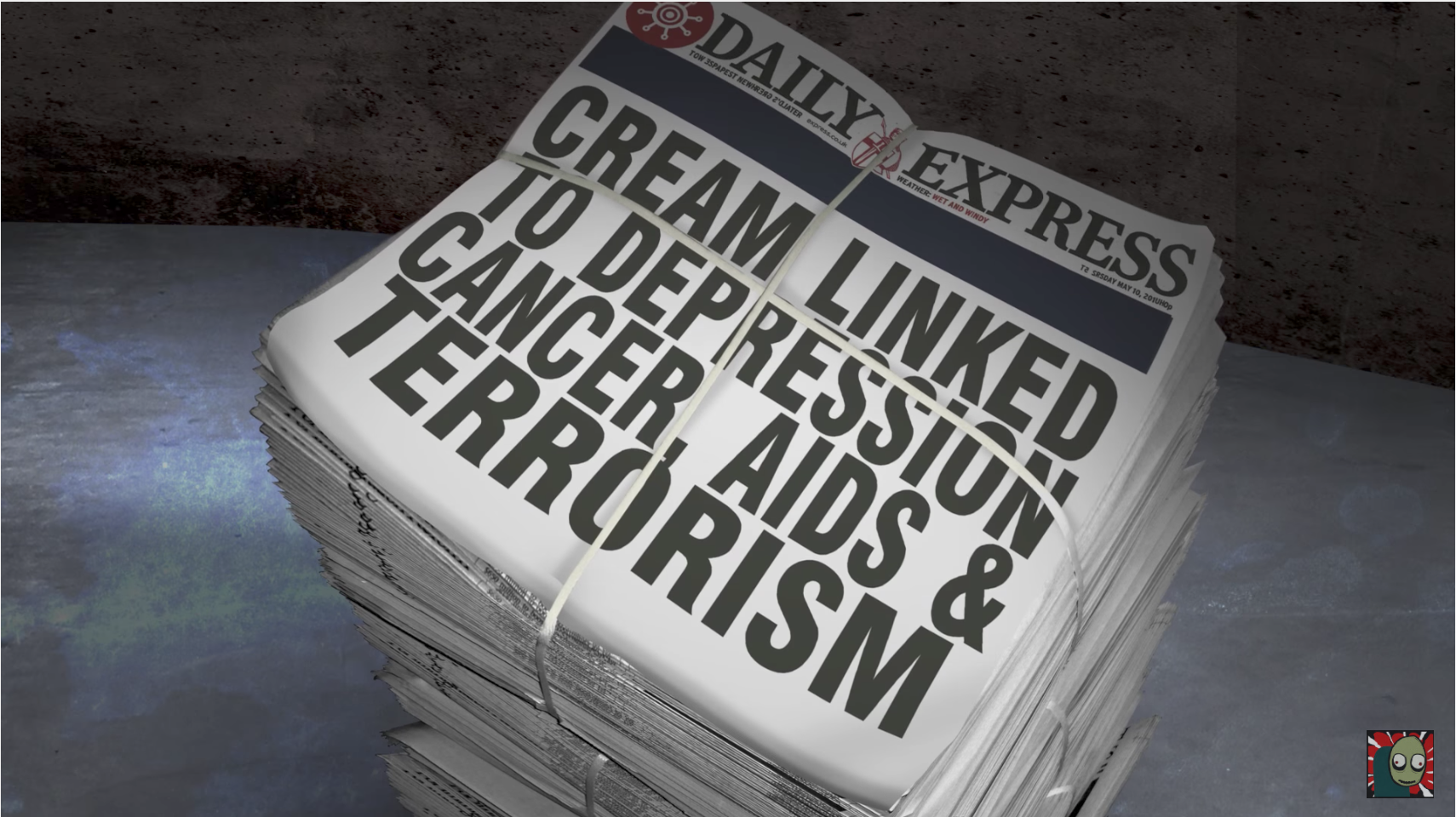 Speaking of Uber, the mastermind behind CREAM, Dr. Bellifer, is eventually arrested for charges of “rape, resisting arrest, tampering with science, upsetting people, causing a panic and wasting time.” This draws ties to modern innovation leaders such as Uber CEO Travis Kalanick, who has had several sexual assault allegations against him.

Even Thinx CEO Miki Agrawal, who loves a taboo workplace making “period panties,” now has the stain of dehumanizing her workers down to simple nicknames, such as “children,” as well as sexual assault.

After flaws in products or allegations against creators come to light, the leaders and their companies are put under the microscope. Uber CEO Kalanick had to resign from Trump’s business advisory council to keep up business and veer away from his relations with Trump, but still customers will not dismiss his sexual assault allegations.

“Cream,” although an entertaining short video, reminds us of the shortcomings of fast paced technology and the makers behind it. By using certain bits of technology, we show a series of support for its creator, hence why “Cream” warns us to be aware of all parts of the product aside from its physical properties.