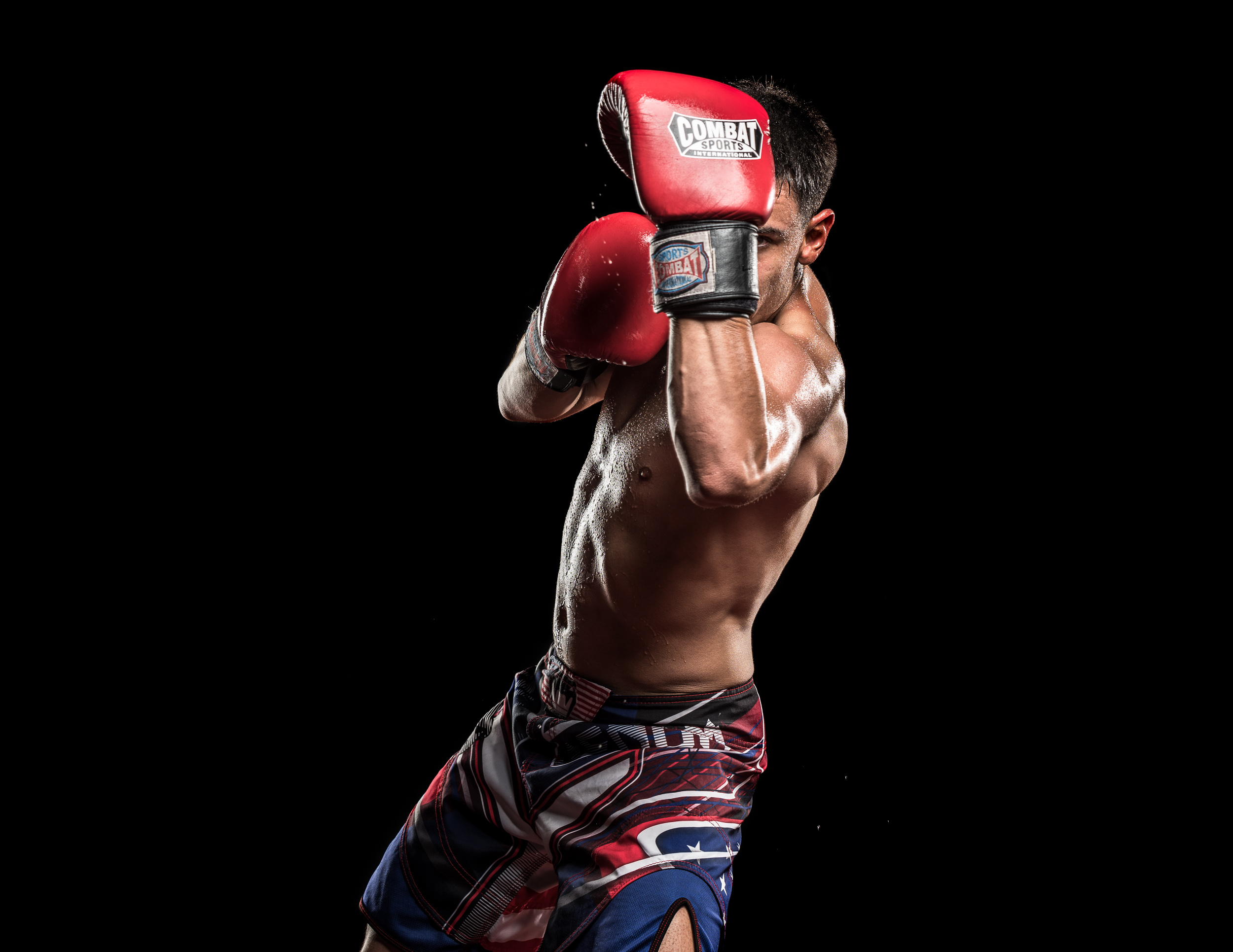 A fast flash duration was used to freeze the movement of Luis F. Castillo shadow boxing in this image. Luis was throwing punches with gusto during this photo shoot and if you look closely you can also see drops of sweat flying off him, which are also frozen in mid air by the super fast flash duration of the strobes. Tech specs: Nikon D810, Nikkor 70-200mm f/2.8 lens, f/8 at 1/250th second, ISO 64, Elinchrom strobes.

As photographers, using a flash or a strobe to light our images can accentuate and lift them up to an entirely new level. One of the key elements to be considered when shooting with flash, and one that gives us several creative options, is the flash duration of the strobe used to create the image. Historically, the top flash sync shutter speeds of 35mm film cameras and modern DSLRs have been around 1/200th to 1/250th second. A shutter speed of 1/200th second is pretty slow if you are trying to stop any sort of moving subject, even a slow moving subject. Because of this limitation, for decades now when shooting with flashes, photographers have relied upon very fast flash durations, not the shutter speed, to stop motion. 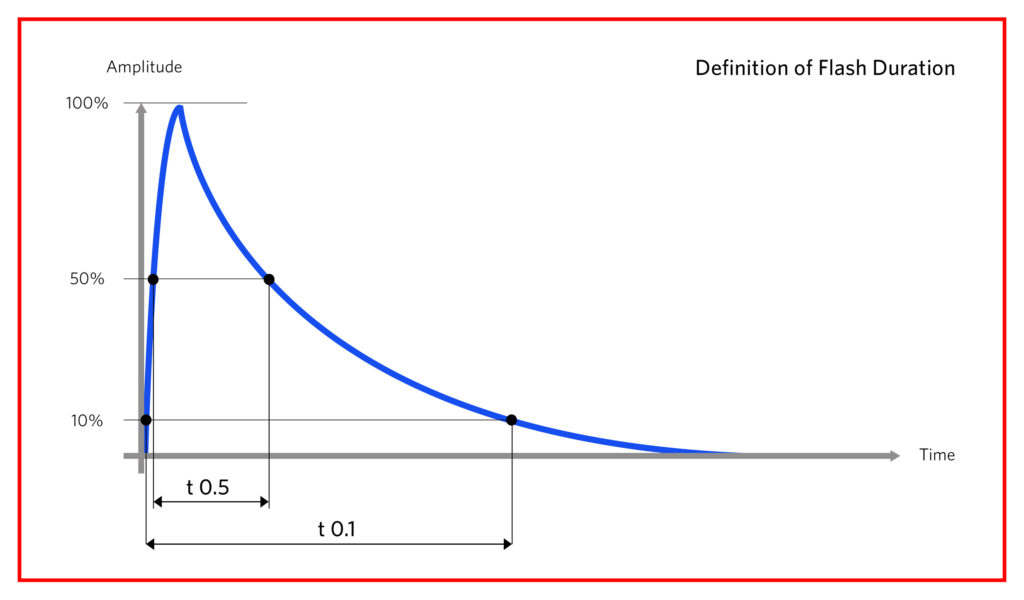 Using a strobe with a fast flash duration is one way to stop the motion of a moving subject when using flash. Typically, a t0.5 value of 1/2,000th second or higher will be more than adequate for most photographers who need to freeze the motion of a moving subject. For those who are photographing extremely fast moving subjects, like dancers or exploding liquids, a much faster flash duration with a t0.5 value upwards of 1/10,000th second is usually required to freeze the subjects movement. 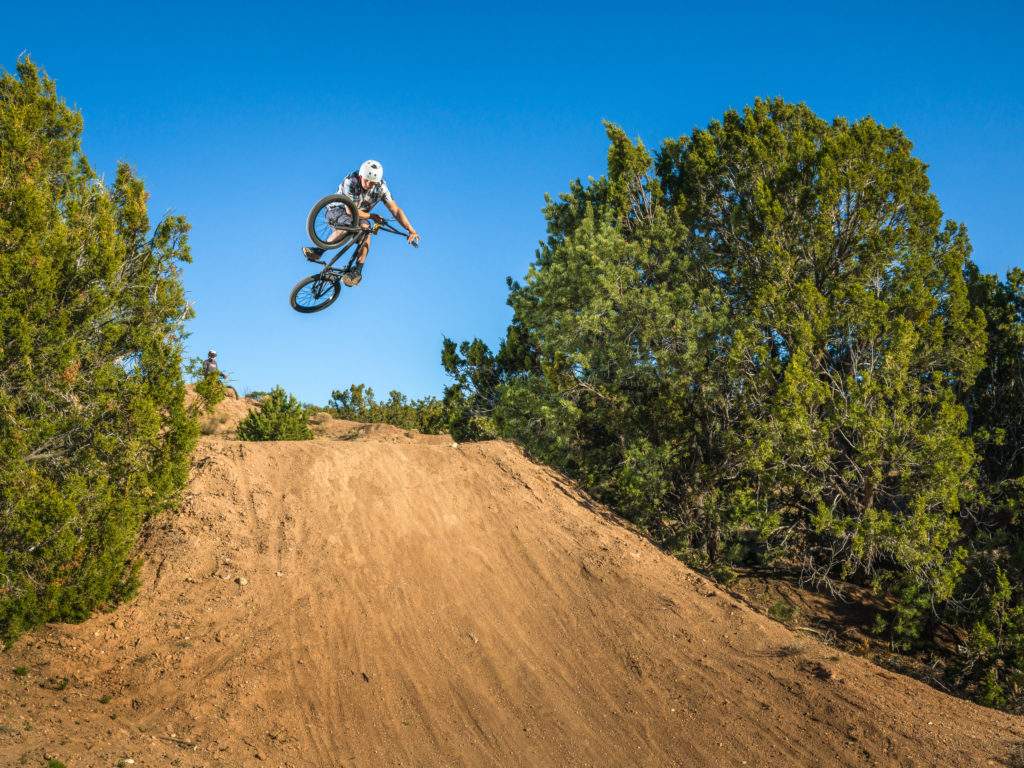 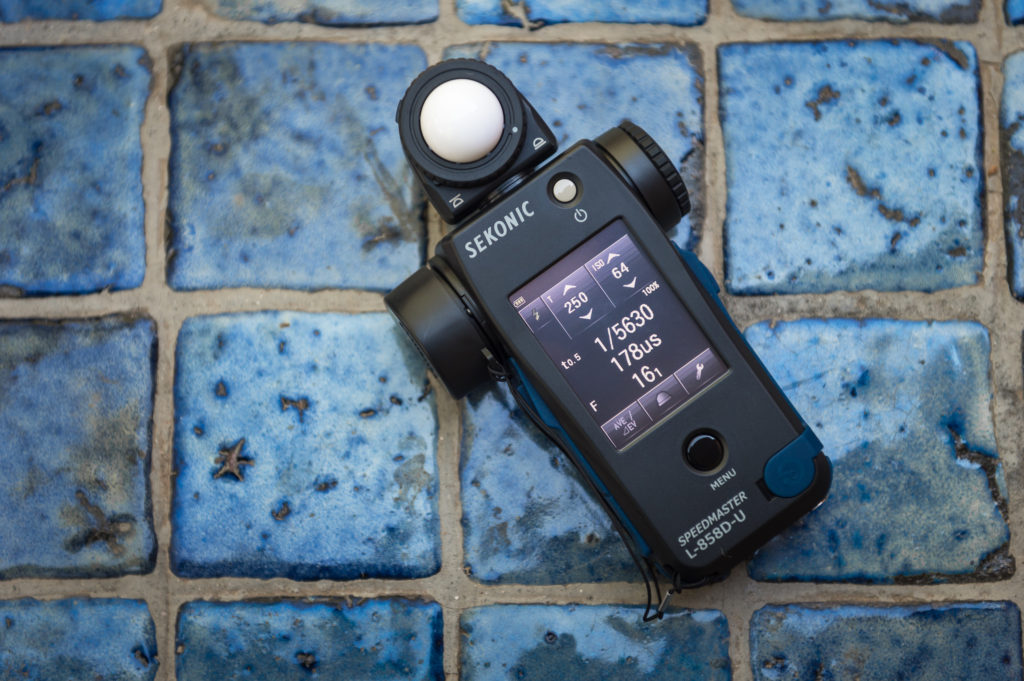 As most photographers don’t own expensive medium format cameras, for the rest of this article I will concentrate on flash durations as they relate to DSLRs. With DSLRs, we have a few options when shooting with strobes. If we intend to stay at or under the top flash sync shutter speed (i.e. 1/250th second) then using a flash with a very fast flash duration is advantageous. Using a fast flash duration allows us to freeze the movement if we stay close to the top 1/250th second flash sync speed or alternatively, we can “drag the shutter” and shoot at a slow shutter speed to show some of the motion blur and then let the flash freeze the movement, as show in in the image below. 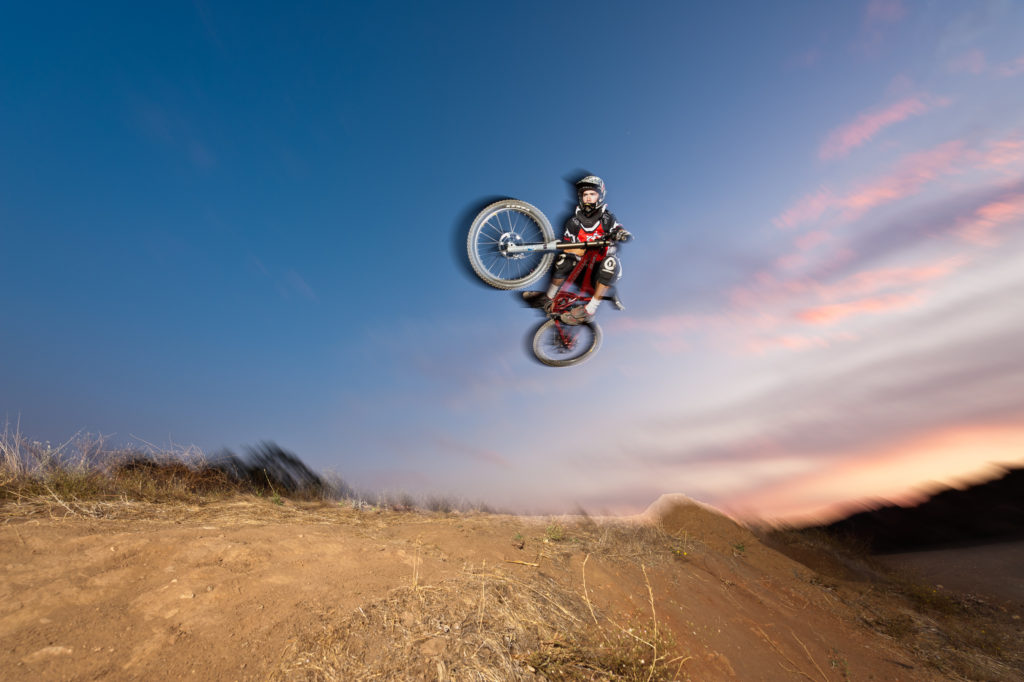 In this image I intentionally chose a slow 1/20th second shutter speed to blur the movement of the mountain biker flying across the sky. During the exposure I also moved the camera while panning with the mountain biker, which partially blurred the ground as well. The flash was set so that it had a very fast flash duration. By combining a slow shutter speed with a fast flash duration I could freeze the rider at the apex of his jump while showing a bit of motion blur. Tech specs: Nikon D700, Nikkor 14-24mm f/2.8 lens, f/5.6 at 1/20th second, ISO 200, Elinchrom Ranger RX Speed AS strobe with the Action flash head. 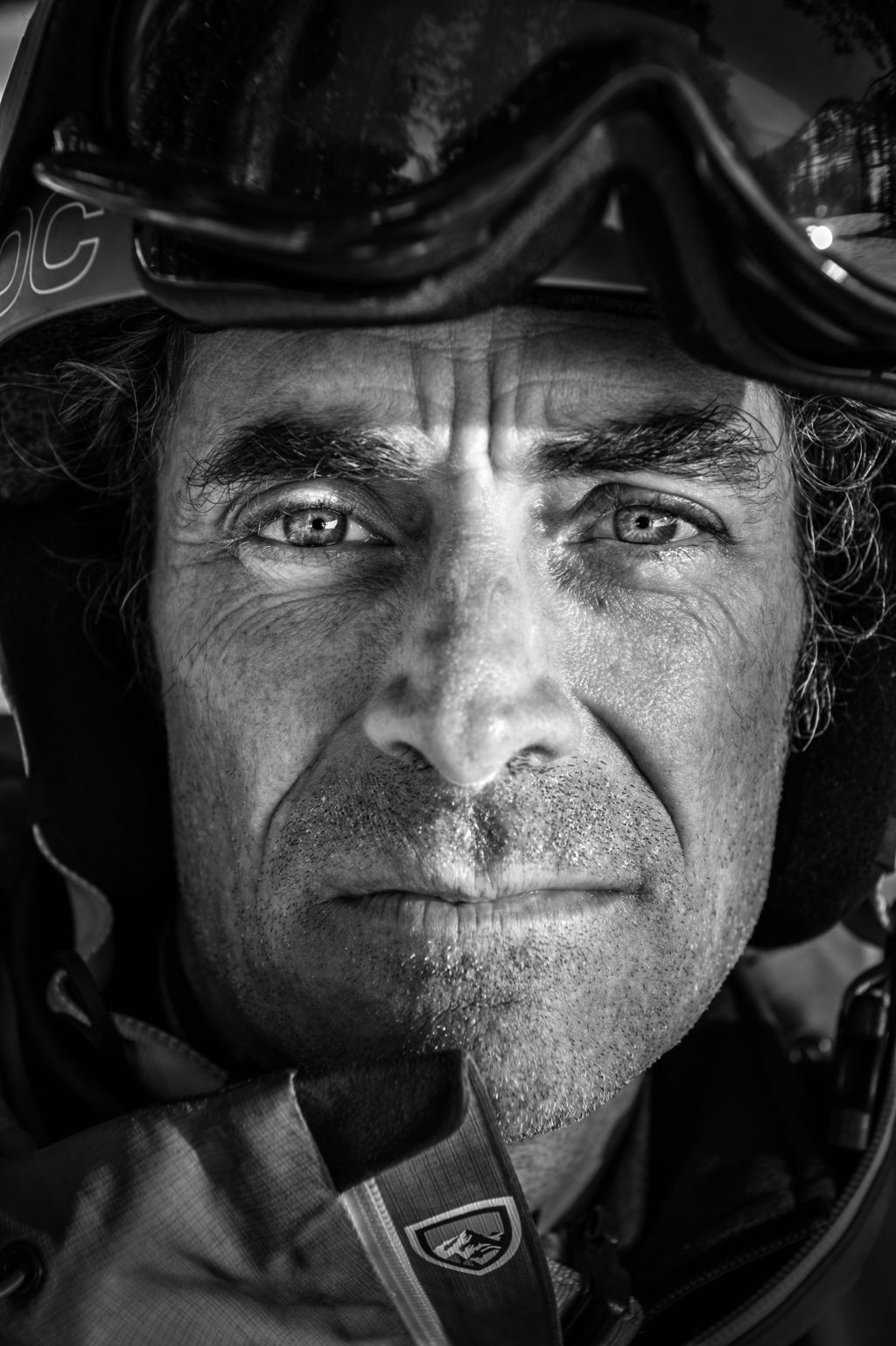 Alternatively, with the advent of Hypersync and Hi-Sync (HS) flash technologies, which allow us to sync modern DSLRs with strobes at shutter speeds up to 1/8,000th second, using a flash with a slow flash duration is paramount for success. HS flash technology works by timing the flash to coincide with the narrow slit of the shutter moving across the sensor. Ideally, the timing allows for the maximum flash output to line up with the shutter release, which usually means the flash is triggered milliseconds before the image is taken. Understanding HS (and how it is different than High Speed Sync) is a complex topic and the best explanation that I know if is in an article that I wrote for Elinchrom entitled, “HS vs HSS: What is the Difference?”

Because syncing the flash and the camera using HS techniques is so difficult, a slower flash duration helps to get good results. Typically a flash duration of less than 1/800th second or less is required for the best results when shooting with HS technologies. Slower flash durations like 1/500th second are even better. What these HS techniques allow us to do is freeze the motion of a moving subject like never before. As in the image below, this inline skater is frozen mid-jump with a flash sync shutter speed of 1/8,000th second. Freezing a subjects motion with the shutter speed is much more effective than trying to freeze it with a fast flash duration. 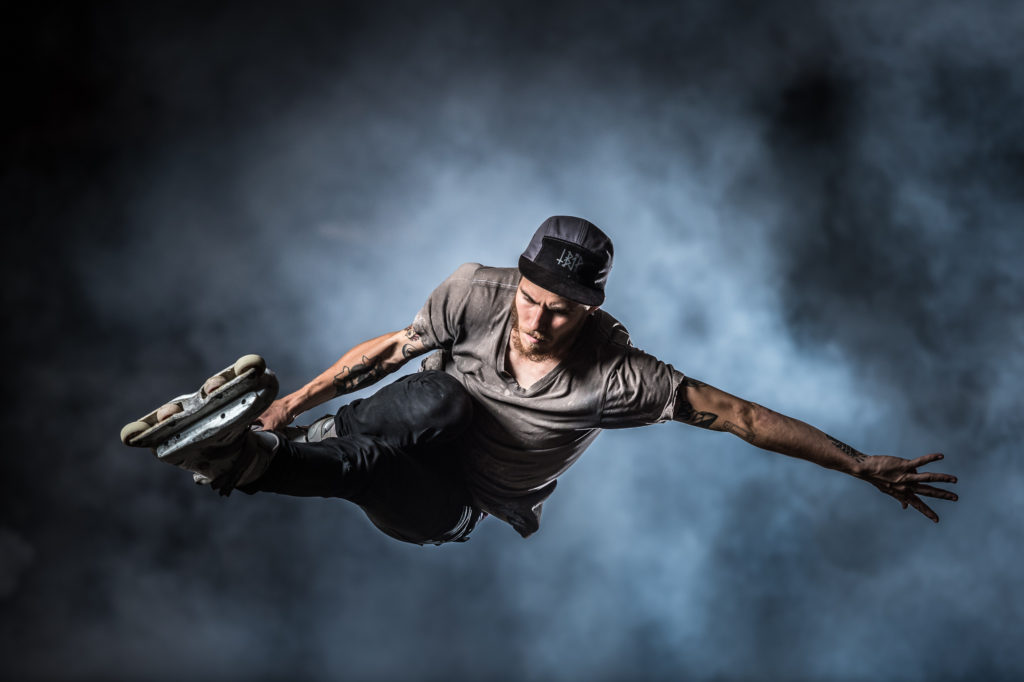 In this image, I have used Hi-Sync (HS) flash technology, currently only offered by a few strobe manufacturers, to sync my camera and the strobe using a 1/8,000th second shutter speed. This freezes all of the movement of the in-line skater. Note that with this technique, the flash duration is much longer than the shutter speed. Nikon D4, Nikkor 70-200mm f/2.8 lens, f/3.5 at 1/8,000th second, ISO 800, Elinchrom ELB 400 strobe with the HS flash head.

For more demystifying flash duration, check out the Sekonic blog!