The man himself has returned, and he comes bearing answers. Casey Neistat broke his public silence today (well, semi-silence) on the work he’s been doing in collaboration with CNN, and uploaded an almost 16-minute video in which he does a pretty thorough job of clarifying the details of this new media brand.

In the most general sense, it’s a news production company—a rebranded and reorganized incarnation of Beme, the digital tech company Neistat founded with his partner Matt Hackett and sold to CNN late last year. What exactly it’ll produce isn’t 100 percent clear, although Casey throws a lot of concepts at us—“Beme Productions,” “Beme Docs,” “Beme Panels,” etc—in a shower of transparency typical of the YouTube megastar.

What does seem clear, though, is that Casey is excited as hell, and his personal channel will continue to operate independently of CNN—though they are funding the Beme endeavor, allowing him to hire a new staff that’s developing a variety of projects ranging from investigative journalism to sports and music/culture coverage. 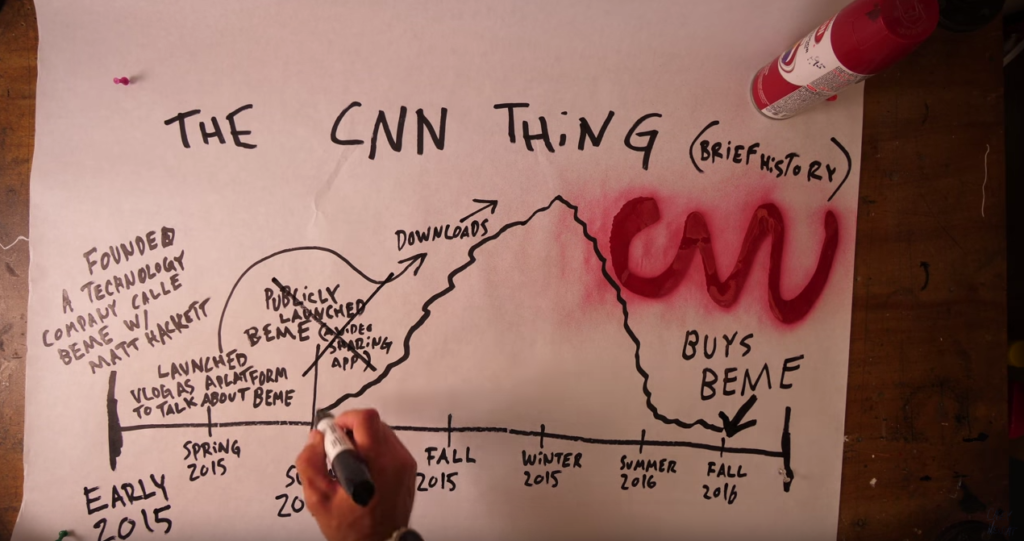 So far, the most concrete arm of the project seems to be “Beme News,” which Casey previews in the video, screening a rough draft of one episode hosted by Beme’s head producer. The episode, which focused on the phenomenon of “click-farms,” is cobbled together from news footage of these diabolical operations in places like Thailand and Russia (where dark-webbers “sell Instagram Likes like Skittles”) interspersed with Jake anchoring a makeshift news desk, then getting out his laptop and paying a click-farm to blow up his co-worker’s Instagram. The daily news show is apparently in the last stages of the development, being prepped for a launch later this month.

While this may not seem too far removed from other hands-on, guerrilla-style media companies like VICE (the comment section of the video is littered with this comparison), Beme has the potential to set itself apart from the pack. Why? Well, foremost is the irresistible star power of Casey Neistat. Even in this straightforwardly informative video, a video in which he takes care to emphasize that Beme News will NOT be solely “The Casey Show” like the vlog that made him famous.“This has to be bigger than me to succeed,” he says, playfully, bounding around like a kid who can’t wait to show his friends what he’s been working on. In addition, from a production standpoint, Neistat explains that the content will be very YouTube-centric, a style and aesthetic far different from any current, news-driven media company.

“heya – don’t judge too quickly, this is just a little sample. we are approaching a lot of topics from serious ones like extremism to more curious ones like the recent legalization of weed in Las Vegas,” wrote Neistat in the comment section [sic]. “topics will vary greatly but will always fall back to what we find interesting. also, most everything i say in this video i talk about in greater depth on my friend Phil’s Podcast, if you haven’t checkd that out yet you should – https://youtu.be/uevoGGrcaeM” 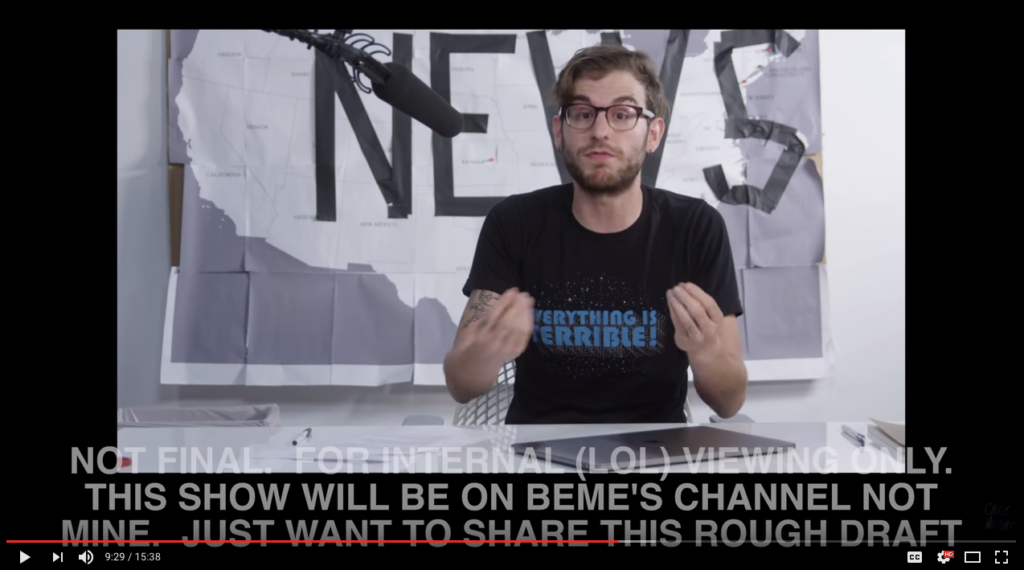 A rough preview of a Beme News set, via YouTube

Another reason is the sophisticated, self-reflexive eye that Neistat and his associates seem to be focusing one what they know best: digital media. At the end of the segment on “click-farms,” Jake takes a philosophical tact, suggesting why we find click-farms and other forms of social media manipulation so perversely fascinating. “What I find, especially from living in social media—I mean my career was made off social media—is that it’s an extension of ourselves, to a degree,” Jake says. “It’s allowing us to share these moments of our lives, and we want people to appreciate them. Is that in the form of a like or a share? Probably, yes! So there is some meaningfulness to that.” The show seems to combine the goofiness and meta-hijinks of the Neistat vlog with fairly erudite analysis of topics you don’t usually see on what Casey calls “the talking head news.”

But the most fascinating part of the video may be around the 5-minute mark, in which Casey talks about his political views, and how little of a role they will play in the show. Like many other YouTubers during the superheated 2016 election cycle, Neistat got markedly vocal about his support for Hillary Clinton, among other topics. Watching him distance himself from those statements is interesting for how deftly he manages to pull it off—whether you think it’s principled or not, it’s an elegant example of how to walk the fine line with online audiences in 2017. As he freely admits, the emphasis of de-politicization is part of Neistat’s attempt to distance himself from his bankrollers at the embattled and highly politicized CNN—and in a moment awash with politically slanted personalities and channels, it’s probably one of the smartest moves to make.

Learn more about the future of Beme in Phillip Defranco’s podcast.