“Someone had to do this at some point.”

While employed at a prominent set shop, Denis Tikhonov noticed something strange: the prices of almost all the items he was selling varied depending upon the purchaser. Speaking on the phone with a potential customer, he would be told one day to relay to them that an item was $700, the next that it was $800.

And that wasn’t it.

Moving up the ranks, Denis became a project manager, putting him in the driver’s seat. He was made to learn the art of the bogus line-item, citing tasks such as “production sourcing” and “design fees” until a clients’ budget was completely eaten up. That’s when he realized: there’s got to be a better way to do this. 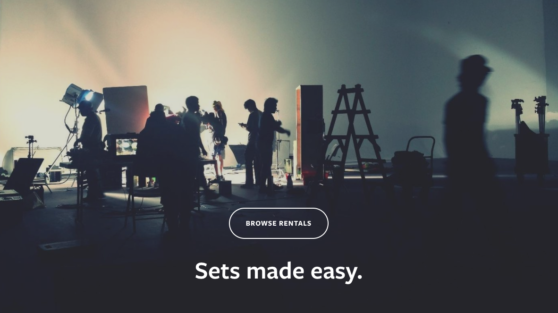 Brooklyn Set Shop’s homepage banner, along with their motto

“In something that is not autonomous, I want to create autonomy.”

Denis launched that something better, the Brooklyn Set Shop, in Fall of 2017, upending the industry as we know it.

Rather than peering into a crystal ball to determine rates, Brooklyn Set Shop lists all of its prices–no strings attached–on a sleek, easy-to-navigate website. Same goes for their delivery methods, materials, and business practices. When it comes to transparency, Brooklyn Set Shop is basically a fish bowl.

Speaking to Denis about his launch, it was clear how humble of a founder he is. Instead of accepting the label “disrupter” that I attempted to force on him for his make-over of the set shop industry, he replied that he wouldn’t say what he was doing was “revolutionary,” but that he’s merely “modifying, improving, and fixing.” Granting that everyone is in business to “make a buck,” he nonetheless reiterated his dedication to his product, hoping that by eliminating the “shadiness” which plagues other set shops, Brooklyn Set Shop would “empower the customer.”

The tools of the trade

To illustrate this latter point, he used the striking metaphor of visiting a mechanic. Because most people aren’t knowledgeable about engines, they feel intimidated seeing the mechanic; they don’t know what to ask for. In a similar vein, a young photog may feel discouraged from renting a set when they don’t know the prices, or the names of, what they’re looking for. By placing all of this information online in a clear, concise way, Denis hopes to give customers the knowledge and know-how to rent with confidence. He calls this: creating autonomy.

Brooklyn Set Shop: Cutting the fat like saw-blades through wood

“Our model speaks for itself.”

So, how does Denis plan on staving off the competition? For him it comes down to three things: quality, efficiency and pricing.

Hopefully this is only the beginning of a trend, with more industries placing power back in the hands of the consumer.