Visuals on the iPhone 8 Plus vs. Pixel 2 XL: A Review of a Review by SuperSaf

With the upcoming release of Google’s latest response to the iPhone 8 Plus, the Pixel 2 XL, SuperSaf reviews both handsets. With a focus on visuals, here is a summary of his findings: 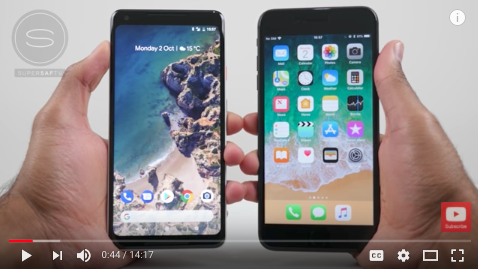 While the iPhone continues to rely on LED, Pixel employs pOLED display, giving it “much better blacks, better colors overall.”

Further, despite being roughly the same size, Pixel’s diminished bezels allow it to achieve 6 inches of screen space to the iPhone’s 5.5. 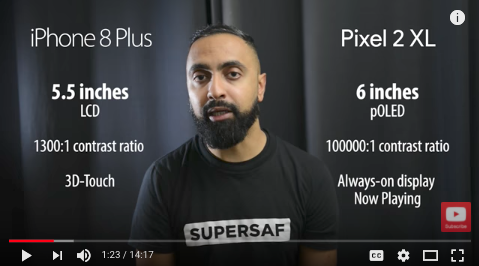 Finally, Pixel’s pOLED technology enables an “always-on” display, meaning the user can glance at the time or incoming notifications without lifting a finger. In an interesting use of this tech, Google unveiled a “now playing” feature where, at any time, the phone detects what song is playing in the environment and provide links to it on Spotify, Youtube, and the like (think Shazam with no effort). 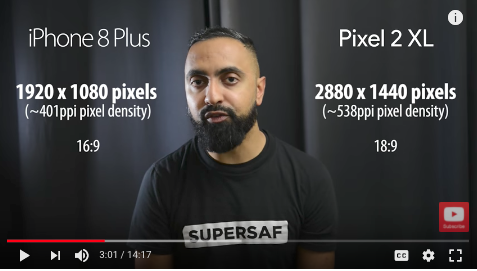 Pixels’ HD+ resolution blows the Full HD resolution of the iPhone out of the water. Just look at these stats: 401ppi pixel density for the iPhone, 538ppi for the Pixel. The adjective Saf uses to describe the latter: “crisp.” 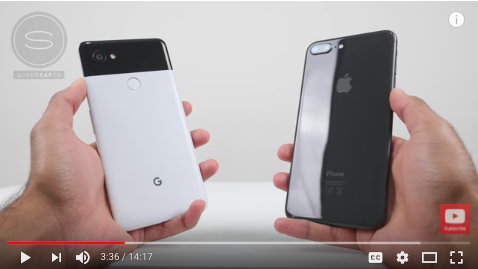 Y’know, that one on the back?

Further, because of the dual-camera setup, Apple offers a portrait mode in which the background is blurred, as well as a Portrait Lighting feature (still in beta) which allows post-production lighting to be done right on your phone. 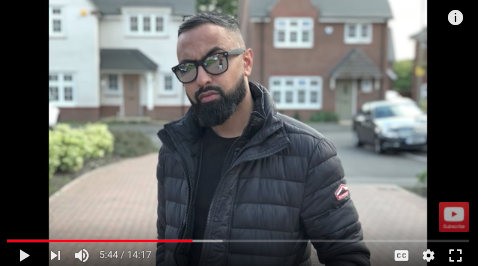 Pixel: One 12.2 MP camera with f1.8 aperture and optical and electronic image stabilization. With a 98 rating, the Pixel scored higher on DXOMark than the iPhone.

Even though the Pixel only has one camera, it also has a portrait mode which utilizes machine learning. Saf cautions, however, “how well this works, we’ll have to test out once the final software version is released.” 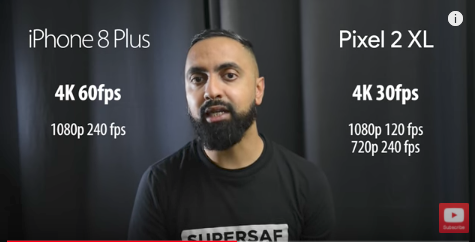 iPhone: With 7 MP and an f2.2 aperture, it “performs pretty well.” Problems are encountered, however, with the blowing-out of highlights, especially in video. Saf hopes they’ll fix this soon with a software update (fingers crossed)

An example of iPhone video blowing out highlights.

Pixel: One camera with 8 MP, an f2.4 aperture and a Portrait Mode which looks “very, very promising.” 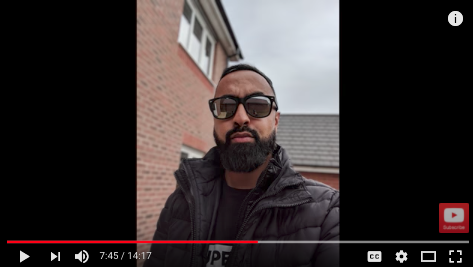 This single-camera portraiture ability is due to Google’s HDR+ processing software, which stacks multiple frames on top of one another. Its ability to maintain shadows while simultaneously capturing highlights Saf applauds as “absolutely insane.”

AND THE BATTLE CONTINUES ….