Philippe Halsman‘s famous photo of surrealist painter, Salvador Dali, made headlines in its original conception in 1948. The image, titled “Dali Atomicus” is famous for its complexity—the shot took 28 takes to get right—and also for the way it captures the imaginative, outlandish quality of many of Dali’s own works. The photo is inspired by Dali’s work, “Lena Atomicus”, which features a woman amongst a number of floating objects. There are many elements at work in the photo produced by Halsman, and they all had to come together at the right time in order to get this revolutionary photo. 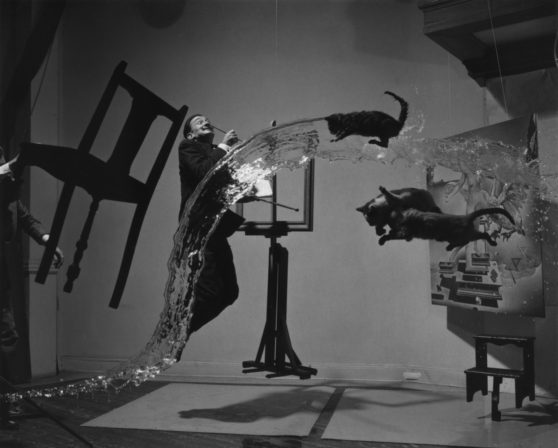 The image was achieved with the help of Dali’s own wife and daughter, who, along with some other assistants, were in charge of throwing the cats and a bucket of water into the air when Halsman counted down. The original “Leda Atomicus” piece, as well as a floating chair and easel, were suspended by thin wires that surrounded Dali. Lastly, Dali leapt into the air at the photographer’s direction while he attempted to snap a photo that brought all of the elements together.  The photo set a new standard for interaction between photographer and subject, and inspired hundreds of photographers to take a more collaborative approach in shooting their content. Now, years later, photographer Karl Taylor has attempted to recreate the iconic image, alongside BBC—and he does a pretty fantastic job. He changes some elements, like replacing the flying cats with a flying toaster and a clock that looks straight out of Dali’s own “The Persistence of Memory”, but other than these slight adjustments, the two photos are remarkably close. 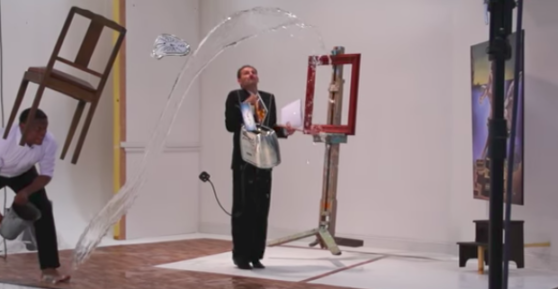 Taylor takes great care to match each element of the photo’s set to the original, even small details like the floor’s wooden border and mysterious staircase landing on the top. The photo comes together much the same way as Halsman’s photo, with Taylor counting down and directing the shot into place. Taylor’s photo even took 29 attempts, which is strangely close to the original production, and he truly captures to complexity that went into Halsman’s game-changing shot.

On his inspiration for recreating the famous photo, Taylor says, “This iconic image has been a favorite of mine for as long as I remember and it is probably the root of my own interest and specialization in photographing fast moving liquids and smashing objects.”

You can watch Karl Taylor’s full break down of the shot here: