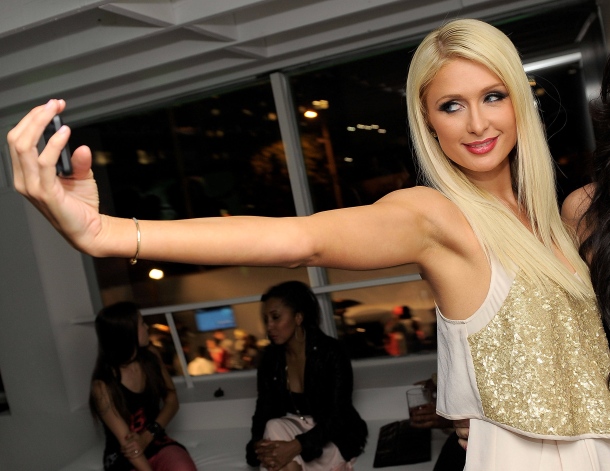 Did Paris Hilton Invent The Selfie?

This past Sunday, Paris Hilton took to Twitter to celebrate the anniversary of what, for her, marked a historic day—the supposed invention of the “selfie”. 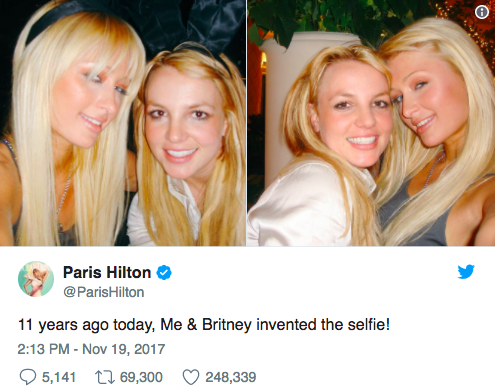 The hotel heiress turned celebrity DJ shared a collection of photos featuring herself and the ever-famous Britney Spears in a pose we’ve all come to recognize. The tweet read, “11 years ago today, Me & Britney invented the selfie!”

If Paris’ calculations are correct, her iconic selfies were taken in November 2006, but there is much reason to believe the Selfie existed long, long before then. Twitter agrees, with hundreds of people clapping back at her tweet with evidence that she did not, in fact, invent the photo phenomenon.

The New York Times talked to Mark Marino, a professor at the University of Southern California who uses selfies in his class to explore identity, for a better understanding of its origins.

” ‘Wait,’ he said, dissolving into laughter as he came to terms with what was being asked. ‘The argument is that nobody had ever taken and posted their picture before this?’ “

First, it depends on how one chooses to define “selfie”. The Oxford Dictionaries defines a Selfie as “a photograph that one has taken of oneself, typically taken with a smartphone or webcam and uploaded to a social media website.” If we want to associate the Selfie strictly with the modern, technological age of the Internet, then perhaps Paris isn’t so far off the mark with her timing. However, if a selfie only involves the taking of a photograph by oneself of oneself, then historically, there have been multiple instances of selfie-taking long before Paris was even born. 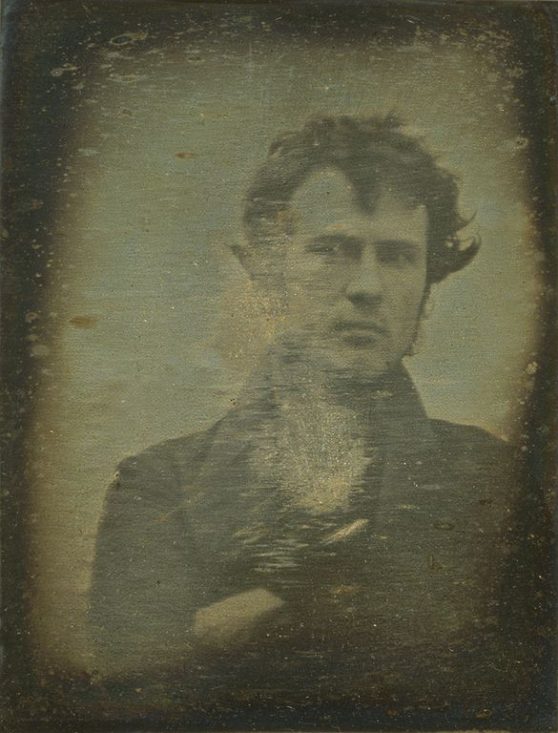 The first of which begins with Robert Cornelius, pictured above, who is thought to be the true inventor of the selfie when, in 1839, he took the first self-portrait ever. He shot the photo by removing the lens cap and then running into the frame where he sat for a minute, then ran back to cover up the lens again. On the back of the photo he wrote “The first light Picture ever taken. 1839.” 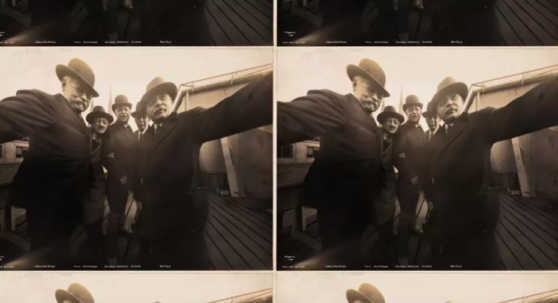 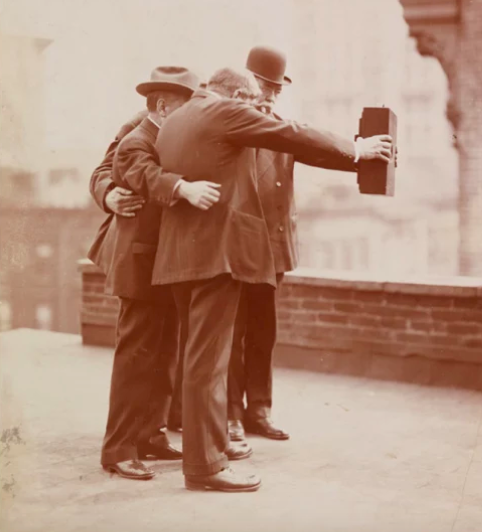 If this doesn’t satisfy your understanding of the Selfie, perhaps because it wasn’t taken using a hand-held approach, then maybe these photos of five men, pictured above, taken in 1920 will. These five photographers came together to take a front facing image by holding up a box camera, in a pose strikingly similar to the kinds of selfies we see today. 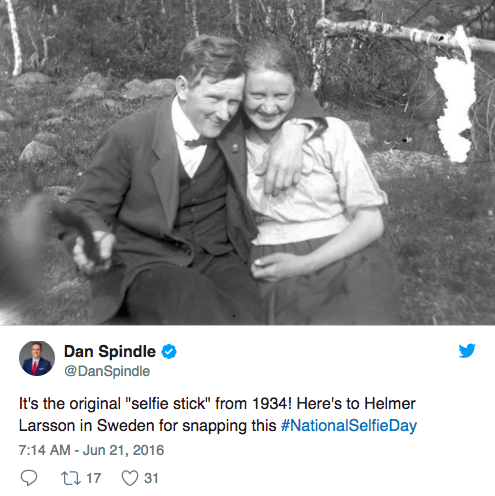 Even the selfie stick seems to have existed decades before Paris! In 1934, Swedish couple, Helmer and Naemi Larsson, used a stick to click the button on their camera, allowing them to take a front-facing photo just like the popular selfie-sticks do.

Of course, the term “selfie” did not exist until 2002, so whether or not these examples could be defined as selfies, before the term even existed, is hard to say—but, they certainly fit the criteria. Regardless, the word’s conception, four years before Paris and Britney’s photo, is also evidence that they did not invent this phenomenon.

Paris Hilton is famous for being possibly the biggest trend-setter of the early 2000s, and is responsible for influencing countless phenomena in the fashion and media worlds. She is certainly credited in launching the selfie to the place it is today, but did she invent it? I’d say the answer is no.

Regardless, Paris Hilton is most definitely the Queen of Selfies. 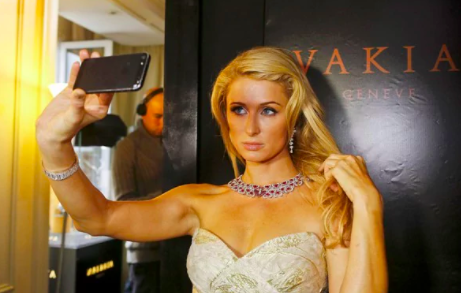 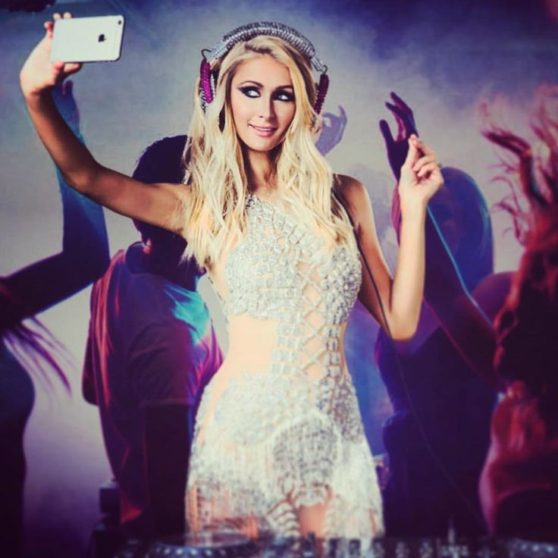 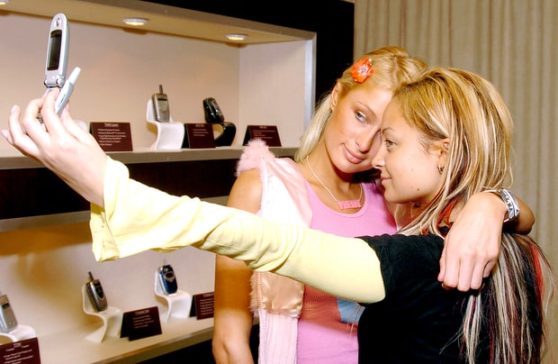 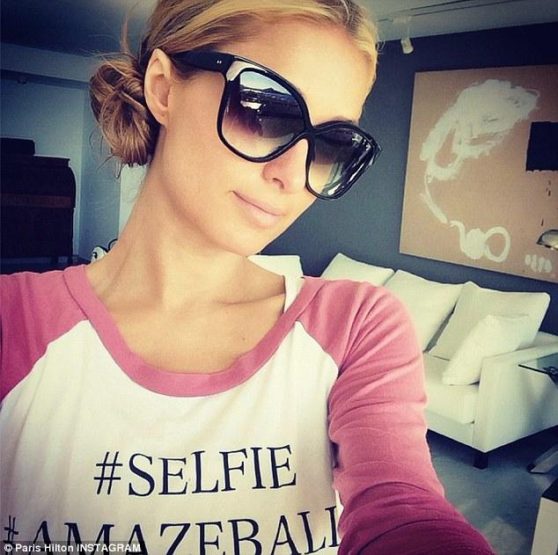