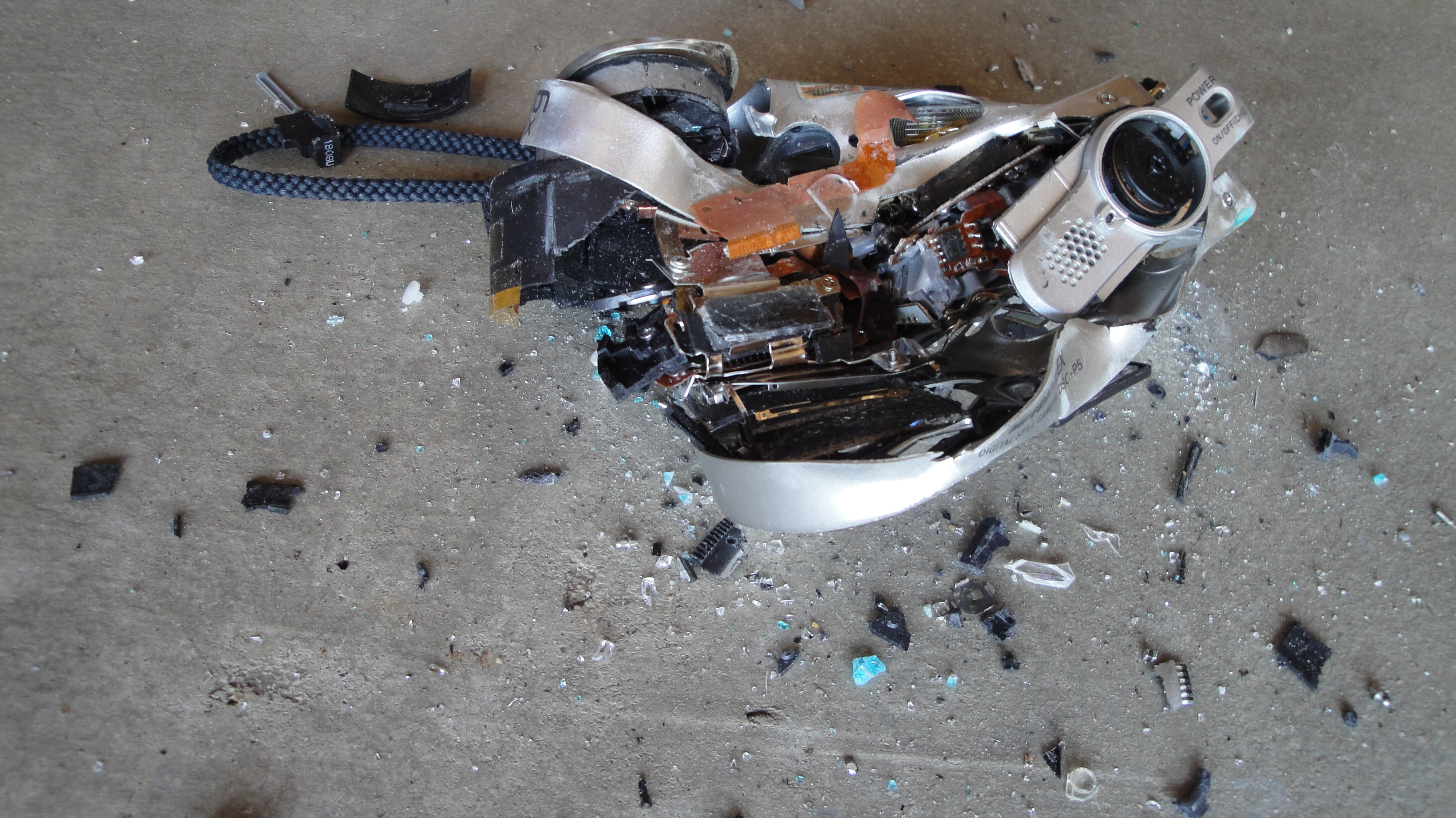 “He Broke My Friggin’ Camera”: In Honor Of Josh Homme, 7 Celebs Caught On Camera Destroying Cameras

Another day, another celebrity victimizing photographers and their equipment. Queens of The Stone Age frontman Josh Homme is our latest assassin in this epidemic after he kicked a photographer’s camera during a performance. This incident made us think of all the other times we’ve seen celebrities lose their shit and break photographer’s equipment and/or face. So, in the spirit of the holiday, let us relive these episodes through a list of some of the best and most notorious outbursts…. enjoy?

P.S Laughing is permitted but also frowned upon. Watching your own kind get beat up is a perverse pleasure which we can’t help but indulge in every so often but, still, keep it low key.

Our most recent incident involves photographer Chelsea Lauren during Queens Of Stone Age’s set at the KROQ “Almost Acoustic Christmas” in Los Angeles. Frontman Josh Homme’s kick was wildly uncalled for, and the video makes that as clear as day. Lauren suffered only minor injuries, but did end up in the E.R that same night, putting a damper on the festivities and adoration for the band. Although Homme has publicly apologized, we can’t help but think it’s to protect his own interests, as he could be slammed with a pretty hefty lawsuit. This seems like an important time to remind our kids that rock and roll can still be cool–albeit perhaps slightly less cool–without assaults on press or rabid fans.

2. Lamar Odom enters hybrid vehicle in search of camera like a bear after honey

While his effectiveness on-court steadily waned since the day he was traded for Shaquille O’Neal, his ability to completely destroy thousands of dollars’ worth of camera equipment has only improved since arriving in LA. This notorious Skittles addict is unique in that he didn’t have to wait for the camera to be in someone’s hands for it to face his annihilation, instead going straight to its resting place.

Exiting his own white Mercedes, Mr. Odom can be seen opening the back of an unmanned grey Prius (because, after all, if you’re driving a Prius you have enough love for humanity to leave your doors unlocked), and emptying it of its contents–most notably a sizable amount of camera equipment. Though details on the damage are hard to come by, we can assume that the impact of the pavement, coupled with the strength of a professional athletes’ propulsion, rendered this equipment useless afterwards. Interestingly, he seemed unfazed by the numerous individuals who can be seen filming his tirade throughout the process, allowing us this unfiltered peek into his rage against the mirrorless DSLR machine.

3. Matthew McConaughey travels with a roving gang of surfers

To be clear, Mr. McConaughey was not directly involved in this scuffle. While visiting Malibu for a surf outing, a gang of paparazzi, as could be expected, followed in his wake. Unfortunately, these poor camera-toting men and women were unaware of the extremes that surfers would go to protect their turf. Shirtless, angry and decidedly not-laid-back, we can see fifteen to twenty of them attacking the press corp stationed just outside of the beaches bounds.

A camera was smashed, a nose was broken, and already tenuous surfer-photographer relations were severely damaged. Luckily, a police report was filed and justice was served. However, let this be a warning to all future action/celebrity photographers. Shoot surfing, or shoot Matthew McConaughey, but never, ever try to shoot Matthew McConaughey surfing.

Ms. Stone can be seen here protecting her kids from the lens’ gaze as if she thought it would steal their soul. While our documentarian was too busy going number two to capture the throw-down in its full glory, we get a nice before and after, including the resulting damage.

Moral of the story, if your friend is going to engage a notorious Hollywood badass in a his-camera-vs.-her-child’s-privacy-death-match please, for the love of god, use the bathroom beforehand. Her kids aside, humanity has truly been wronged here by being deprived of this almost assuredly solid gold footage.

This one speaks for itself. White men can’t jump, but they can get extremely mad at other white men with cameras. Woody alleged afterwards that, having spent the past few months shooting a zombie flick he “understandably mistook” the cameraman “for a zombie.” Hence why he also physically assaults him. Not sure why a zombie would have a camera though unless it was X-ray and allowed him to look at Woody’s brains, helping to decide whether they are worth the trouble of cracking open his skull. Anyway, the cameraman’s reaction on this one is priceless: “he broke my friggin’ camera.”

While most celebs rest easy after having broken a paparazzi’s camera—thinking they have thus evaded having their image captured–Mr. Baldwin knows better. Rather than simply destroying the tools of the photographer, he goes after the photographer himself: try taking a photo with a broken arm, ya big dummy.

While this is perhaps the scariest scenario for a photog, it is also a great honor, testifying to their indomitable will. After all, he is conceding that the only thing that could stop one from getting the shot they want is numerous broken bones. Little does he know–not to give him any ideas–but he’s going to have to wrest that camera from our cold, dead hands.

Much like his attempts at remaining hidden from Redditors, or becoming a rap sensation, Mr. LaBeouf here just can’t seem to get it right. Irked by a camera wielding follower, he exited his vehicle charged right at him, hoping to do some serious camera-and-face-smashing. Happily for our photographer, this raging curly-headed foe is evaded, left wandering the parking lot wondering just what went wrong. He’s lucky, too. Had he broken anything, I’m sure he would’ve gotten been sued and forced to repay our dear friend here in order to, yes I am going to do this, in order to….make things….EVEN STEVENS. HAH!

Many thanks to Cassandra Rohr who contributed reporting and penned the intro. She loves QOTSA so it wasn’t easy for her. Luckily for us, she loves the Resource community even more.

Feature Image Courtesy Dave Dugdale, who can be found @ http://www.learningvideo.com/