We’re only three months out from the infamous David Slater case— in which PETA sought to claim copyrights on behalf of the crested black macaque Naruto over his own portraits– and already we’ve got more monkey selfies. Mr. Wood was visiting the Tanjung Puting national park in Borneo, working as he does regularly to conserve orangutan habitats, when he decided to hide his GoPro amidst the dense brush. Hoping to get some “close-up wide-angle images” of these “great apes,” he figured the worst case scenario would be that one of them discovers the camera, realizes it isn’t food, and discards it. Clearly Mr. Wood had underestimated the exceptional narcissism of his hairy friends. “An orangutan stole my camera”-Mr. Wood, or, Man who believes local legal codes should apply to all species

Thus he was surprised when a three-year-old orangutan quickly picked up the little device and began snapping intimate pictures of its eyes, nose, mouth, duck face, etc. Evidently displeased with the lack of bokeh he was seeing, our silly orange friend made the same mistake many of us do when we find ourselves frustrated by our own image–bite something. Unfortunately in his case, the only object in site was the GoPro itself, and thus he received just the satisfaction of cracking an LCD screen with his incisors, an admittedly unpleasant sensation, at least for his more evolved brethren. Unacquainted with failure, and thirsty for the like-mediated  approval of strangers, tree-swingin’ Kylie Jenner didn’t stop there. In fact, his oral rendezvous with the camera seemed to have alerted him to a deep truth of its existence: to get good pictures, you have to take many shots. Newfound wisdom in hand, he went on to “accidentally”–according to Mr. Wood–take “hundreds and hundreds” of photos.

“I was staggered when I went through the images and found a few which were remarkably decent photos”- Mr. Wood, anxious about losing his job

Mr. Wood, meanwhile, whose thinly veiled jealousy was betrayed by his frequent expressions of condescension –such as calling the work “a few…remarkably decent photos’– kept track of his camera via a livestream to his iPhone. When, thirty minutes later, the orangutan dropped the GoPro from within the canopy, evidently believing it to be a cell phone and attempting a Schrodinger’s Text in response to what stimuli we may never know, Mr. Wood came back onto the scene–without a yellow hat, I should mention–to recover his goods. 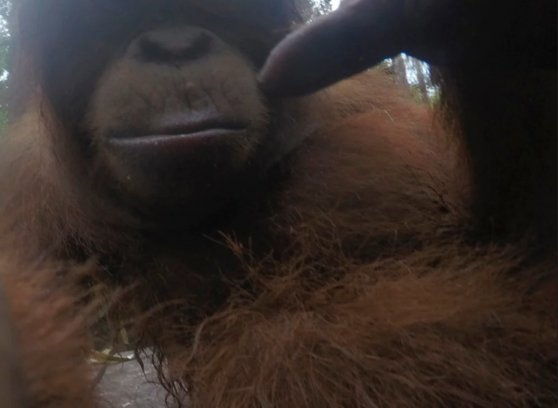 Fast forward to December 6th and this selfie monkey’s got his mug plastered all over the web. Humans, it seems, never learn from their mistakes, and will continue appropriating the private portraits of orangutans and other ooh-ooh-ah-ah’ing animals until the end of days. May God have mercy on our souls.