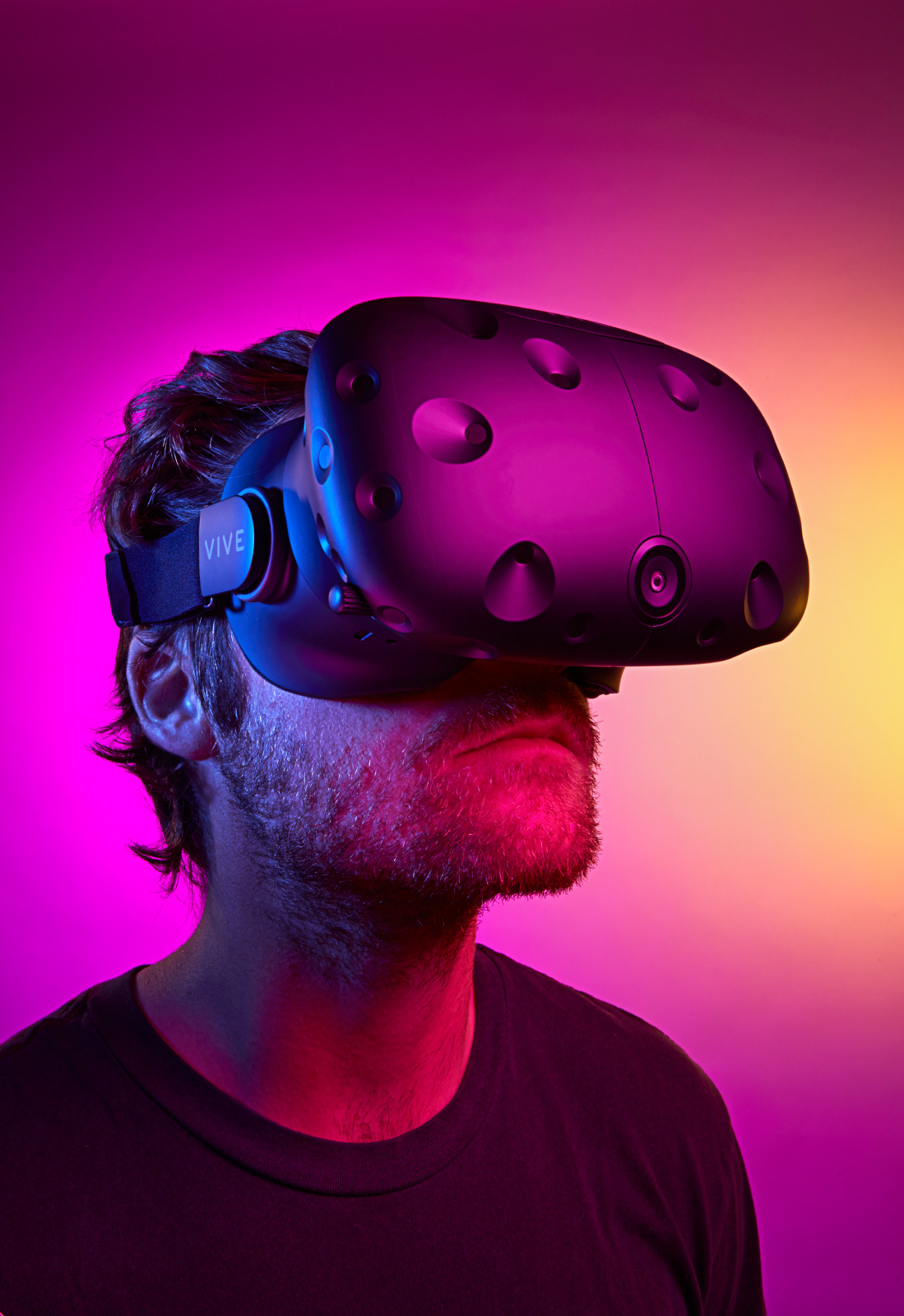 Whether you like it or not, capitalism rolls on. While most of the stuff it produces may be crap designed to lure the naive consumer, there’s always a few gems out there. We’ve scoured, tested, broken, fixed, and even managed to lose some of it, all in the hopes of bringing you the best of the best. So here’s our picks for Spring 2018, Resource certified as always. 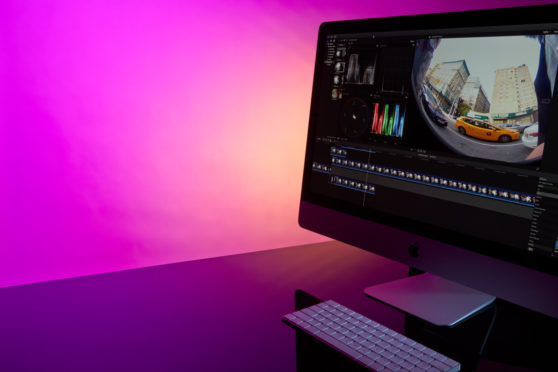 Final Cut is back and better than ever. Released on December 17, 2017, the 10.4 update gets you caught up with new media forms, while diving deeper into the old ones. Most notably, it’s now capable of 360-degree VR editing, all the while allowing you to stream your video in real time on an HTC VR headset. As for graphics and effects, it’s got those too, now in 360-degrees.

For the more old-school heads, they’ve improved their color grading tools, along with making them HDR compatible. The wheels, formerly disparate, have now combined hue, saturation, and brightness into a single interface. Color “curves,” meanwhile, allow ultrafine adjustments and targeting of color and brightness ranges, with an eyedropper added in for extra color sampling goodness.

Lastly, they’ve upped their support for other Apple platforms, allowing HEVC and HEIF, the new photo and video formats found in iOS 11 and High Sierra. For those hoping to upgrade their gear without losing their work, 10.4 features direct importing of iMovies. And they recommend you do, promising “you’ll cut faster and more precisely.” 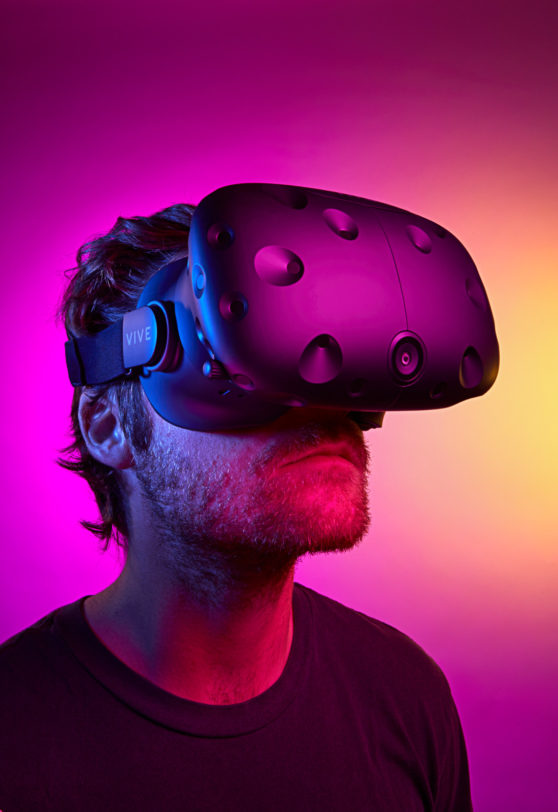 The most advanced consumer VR on the market, putting on the HTC Vive “washes away the real world.” With a 110-degree field of view, advanced haptic feedback systems, and a game catalogue which includes Fallout IV, it’s easy to see why TechRadar named Vive the “Best Gaming Device” of the year for 2017.

The system—which requires a 15 ft. x 15 ft. space to be played—also has added safety features for those concerned about leaving reality in the dust. While inside, a “Chaperone System” warns you if you reach your boundaries, while front-facing cameras offer a glimpse back into reality should you need it.

Its capabilities, however, expand far outside of gaming into education, healthcare, fine art appreciation, and most importantly aiding content creators to build VR content for the rest of us. The ability to create every aspect of a user’s experience means a whole lot more room to experiment and do what creators do best: create. If you’re going to shoot VR you better be prepared to edit VR and what better to do it but with the perfect pairing of Final Cut Pro X and HTC Vive.

Reviews on Amazon, seventy-percent of which are 5 stars, rave about the product, calling it “a true blessing” and “my own holo deck.” In my experience, I’ve found the Vive offers superior gameplay to other more expensive systems out there, while sticking to a basic set of hardware which doesn’t feel encumbering even as it becomes your sole point of entry into virtual land—I couldn’t recommend it enough. The only downside is that I have no idea where in NYC you are going to find an apartment with enough real estate to accommodate its demands; the rent is too damn high! 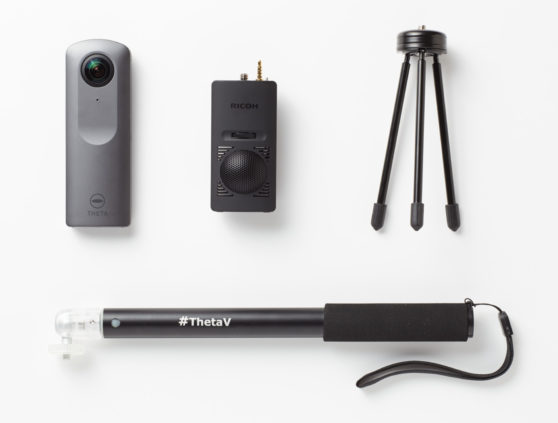 This nifty, oversized USB-looking gadget is the only tool you need to enter the exciting world of fully immersive imagery. With a fisheye lens on either side, it shoots—or records—in 360-degrees, allowing the user to “record and recreate the real world” like never before. And that’s not all: features like 4k video and 360-degree spatial audio mean that your videos will truly evoke the feeling of being there as sounds come in from all directions.

Meanwhile, Bluetooth capability allows you to watch or live stream videos after downloading the app. They can even be played from a TV, with the Theta moonlighting as a remote. Most importantly, your work can be accessed via VR headset (this is quickly becoming a theme), allowing you to relive your past glories in all their immersive splendor.

As for specs, the Theta has a sensitivity of ISO 3200 for stills and ISO 6400 for video, making it perfect for capturing dimly-lit events, as the best of them are. Its casing, meanwhile,  along with being sleek and nice to the touch, is also waterproof to 30m. So go and shoot some sharks with it. 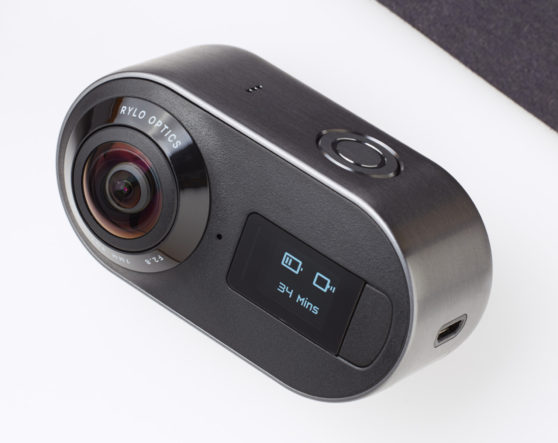 OK, this product is cool. Like really cool. Like ‘I don’t even shoot videos but now I want to and I only want to use a Rylo’ cool. This tiny little thang is perfect for making well-crafted videos without, well, having to do all that much crafting.

Like the Theta, Rylo has two lenses, each with a 208-degree view, in combination capturing more than a full range of vision. However, it isn’t exclusively marketed towards VR and other immersive imaging, instead explaining that a 360-degree view gives you freedom to, when editing, choose just the right frame, with no lack of image holding you back. You might just accidentally capture the perfect shot while you were filming in the opposite direction.

Further, it’s got a one-of-a-kind image stabilization mode, turning your disaster-cam videos into a smooth follow. As for directing pans, zooms, and the like, just tap on your screen—if you’re editing on a smartphone—and it pans that direction, easy as that. Tap on a figure, meanwhile, and it will keep that figure in the center of the shot, even as it moves. This isn’t quite filming with your eyeballs, but it’s pretty darn close. I still want to be a cyborg, though.

The Rylo retails for $499 and can be found at shop.rylo.com 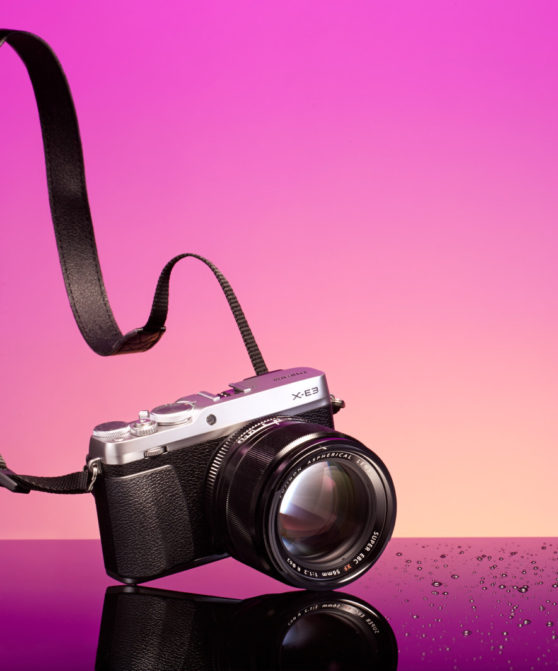 If you were already in love with FujiFilm’s mirrorless cameras, this one is going to continue that romance. Reminiscent of its sister-model, the X-T20, the X-E3 is a little bit smaller, and a whole lot more touchscreen. As for the internal goodies, it’s got what you’ve come to expect from a mid-level FujiFilm: 24MP sensor, AF tracking, 4K video, Wi-Fi and Bluetooth capabilities and a frame rate of 8/14 fps.

The addition of, and highly expanded capabilities for, the touchscreen panel means the eradication of the 4-way control, while the built-in flash results in a more compact body, enabling the most portable and lightweight iteration of the model to date. Constant connection, meanwhile, from Bluetooth and Wi-Fi, means images will transfer from camera to smartphone the moment they are snapped, perfect for our ever-decreasing store of patience. Finally, FujiFilm attests that its AF Tracking has been greatly improved and can track smaller and faster subjects, a change which will, after its roll out on the X-E3, be expanded to the rest of FujiFilm’s product line. In short, it’s a FujiFilm that’s lighter, smaller, more intuitive, and requires minimal button pressing; if that doesn’t turn you on, check your pulse. 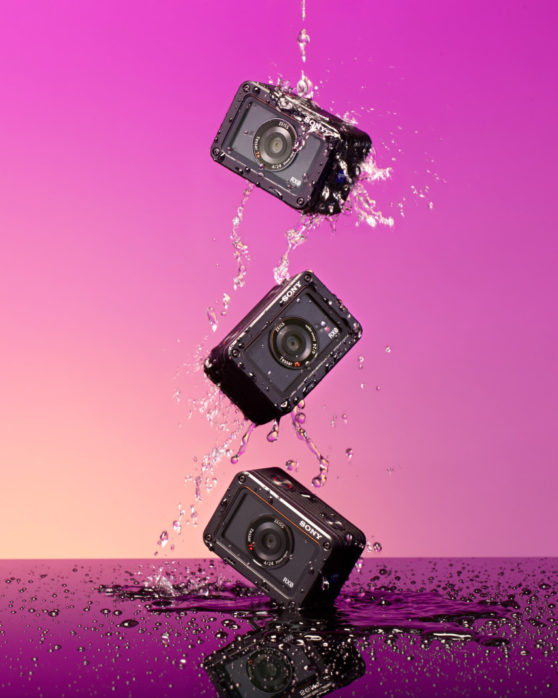 The RXO is a whole lot of camera crammed in a not-so-whole-lotta body: 1 ? x 2 ? inches, to be exact. Designed for those who never know in what conditions they’ll be shooting—and who need the reassurance that no matter what, their gear will be ready to work—it’s built to be protected against all the elements typically known to disable other more run-of-the-mill cameras. That means waterproofing up to 33 ft., shockproof from up to 6.5 ft., and crushproof up to 440 lbf, making it kind of like the Nalgene of cameras.

As for what’s being protected, it’s got a 1.0-type (13.2mm x 8.8mm) Exmor RS™ CMOS sensor, 15.3 MP, and an auto sensitivity ranging from ISO 125-12800. It also comes with a ZEISS Tessar T* 24mm lens with F4.0 aperture, and, in a new addition, boasts an Anti-Distortion Shutter which shoots at 1/32000, meaning stuff won’t get weird and bendy because it’s moving too fast. Finally, as we’ve come to expect from top of the line gear, it can shoot in 4k video because, well, who can’t. So if you’re trying to shoot amidst rapidly changing conditions where the unexpected is expected (*cough cough* global warming *cough cough*), this just might be the camera for you. 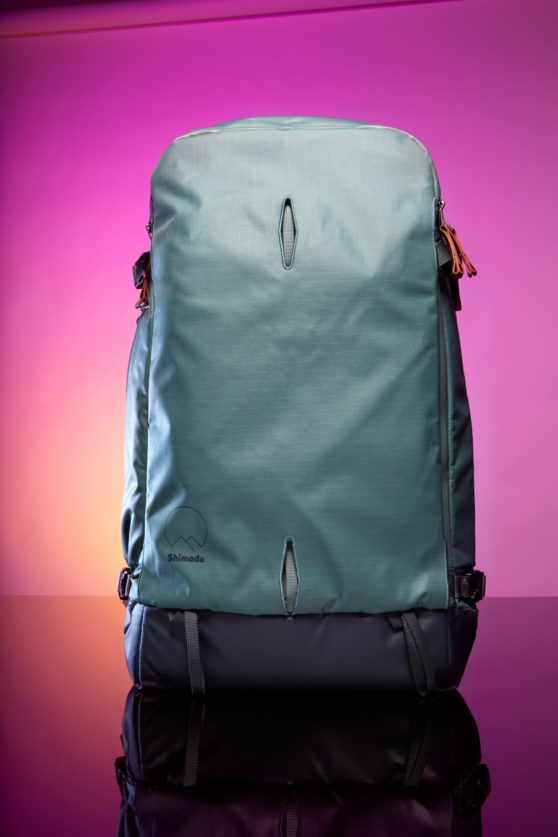 Adventure photographers are, on the whole, pretty relaxed people. Used to braving storms, trekking mountains, or picking sand out of their eyelashes, the normal day-to-day stuff typically doesn’t ruffle their feathers. That is, until Shimoda released its Kickstart-funded Explore Backpack, the lightest bag in its class to ever hit the market. As one writer at Imaging Resource put it: “There isn’t really another adventure bag out there that seems to ‘get’ photographers who also happen to be backpackers.” His apparent mixed metaphors–describing an inanimate object as “getting” someone–is more of a Freudian slip: to many adventure photographers out there, this bag is something like the best partner that money can buy. 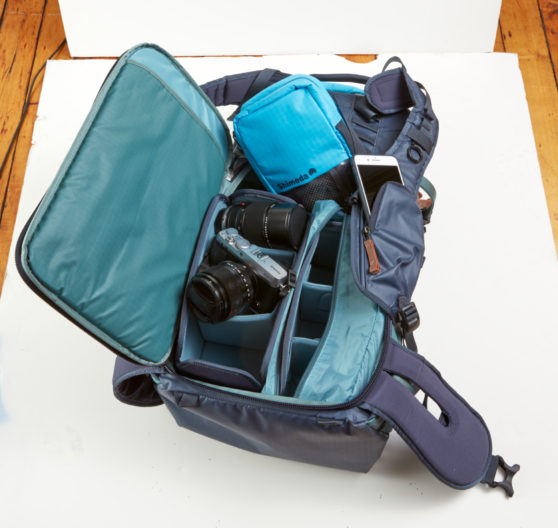 Coming in two distinct colors and two sizes (60L and 40L) Shimoda Explore Backpack is customizable to a fault, allowing the user to pack exactly as much as they need. This is achieved through inserts, which can be removed, reformatted, and placed back in, or even used as a carrying bag in their own right. The accoutrements, meanwhile, are well thought out: straps which don’t tug or pull, pockets in all the right places for snacks, phones, etc., and a couple of easy in/out routes for quickly retrieving equipment in the heat of the moment. If you’re a casual urban photographer, this bag is overpriced and unnecessary, bordering on decadent. If you’re an adventure photographer, travelling to places where others dare not, pushing the boundaries of exploration while capturing it all in majestic images, then it’s just right, and couldn’t have come soon enough. 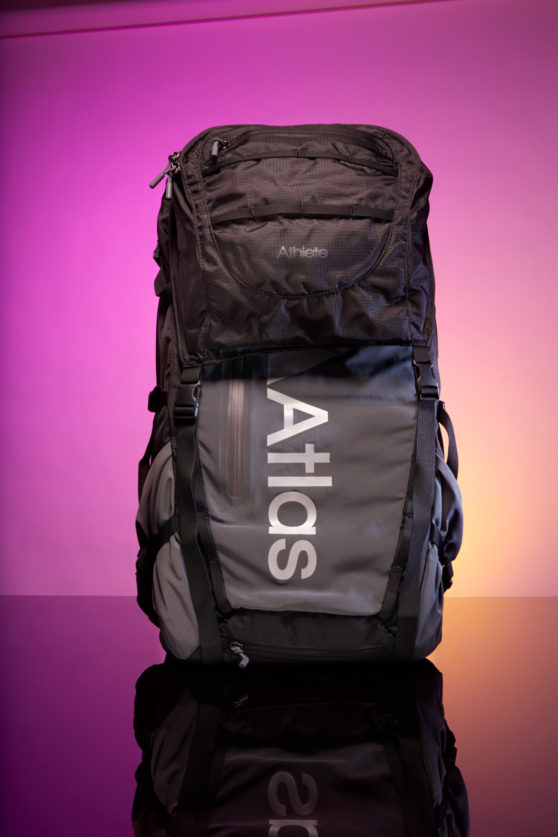 Nobody wants to carry camera gear for long distances. If we could, we’d simply have our drones do it for us, meeting us at the proper location when the time is ready. And maybe one day we will. Until then, however, at least we have Atlas Packs, the backpack made for those who “haul gear.”

One look at an Atlas bag in decent lighting and you know your gear–and your spine–are in good hands. While it’s hard to put a finger on just what makes these bags so phenomenal (Is it the precisions stitching? The fabric which is lightweight yet rugged? The internal design which holds your gear close like a mother to its newborn baby?), it’s easiest to say it’s just a beautiful combination of all these factors resulting in a bag which is almost as pretty, and durable, as that mountain you’re about to climb. 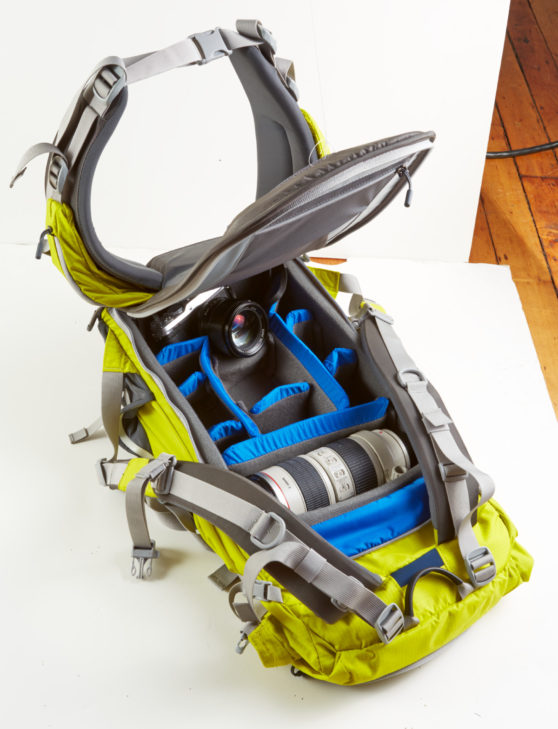 Atlas’ other claim to fame is their bag’s unique modularity. A good example is the fact that they have two options–large and small–depending upon the wearer’s height and weight. The catch? Both bags are the same size and shape, differing only as where the shoulder straps connect. Don’t find either setting too appealing? You can always “request to try a different size waist belt or shoulder harness.” I know we’ve all been told that “the customer is always right,” but Atlas seems to have really taken this to heart.

The bag’s guts, meanwhile, feature a one-of-a-kind Origami Core which bends to your will like a lab rat to does to the scent of cheese. It’s removable, too, meaning you can always take it out to meet carry-on standards and then place it right back upon landing, pretending like it didn’t happen and telling your camera “shhh baby, it’s alright, you were with me the whole time.”

Atlas Packs retail for $385 and can be found on atlas-packs.myshopify.com