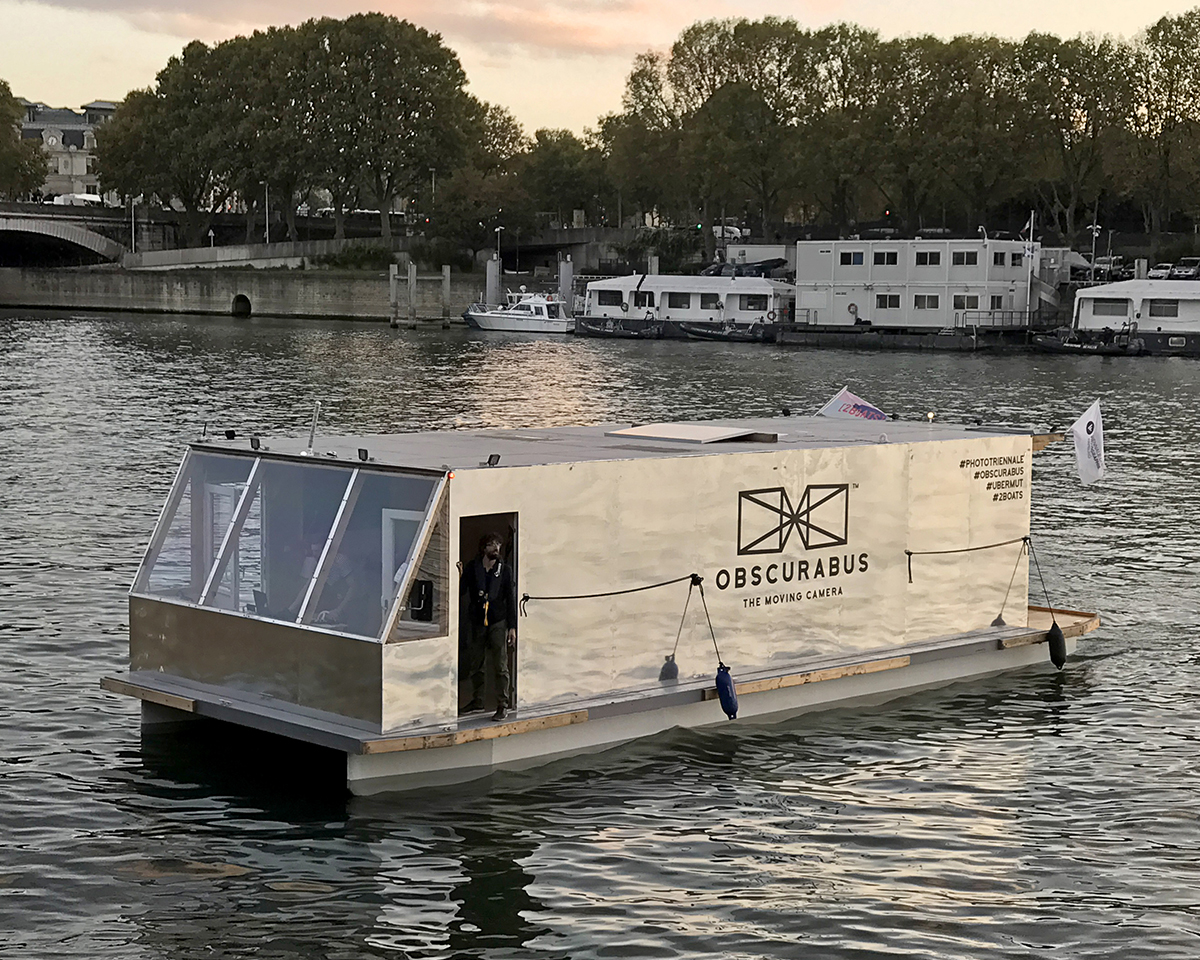 The 2Boats project, part of Ubermut project (which highlights German creativity), is an adventurous collaboration between two artists, each with their own homemade houseboat, as they travel through the canals and waterways of Europe, showcasing their photography, connecting with artists, taking part in discussions, studying the environment, and stopping at major photography events along the way.

Departing from Hamburg in August 2017, the boats visited Amsterdam for Amsterdam’s Unseen Photo Fair, Paris for the Paris Photo, and will be in Berlin in the spring where 2boats will attend the Open Gallery Weekend (two days and nights where 50 galleries throughout Berlin open their doors), before returning back to Hamburg in June for the Triennial of Photography Hamburg, which runs from June to September, 2018. 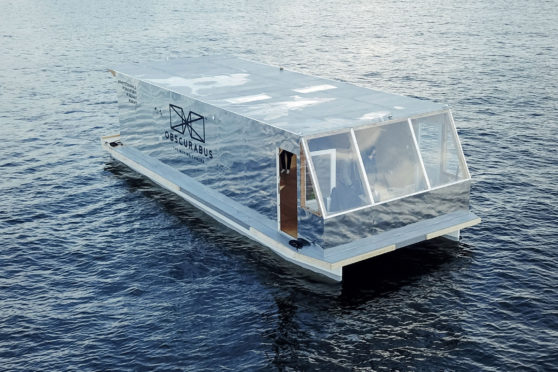 Maciej Markowicz is one of two captains of the 2boats project. He is a polish photographer and designer based in Berlin who has worked on “The Moving Camera Project” since 2015: for two years, Markowicz drove around New York City taking pictures with his 1970s VW (a “van-turned-camera”) challenging the perception of time, urban landscape and “the everyday dynamics of modern life in the city.” 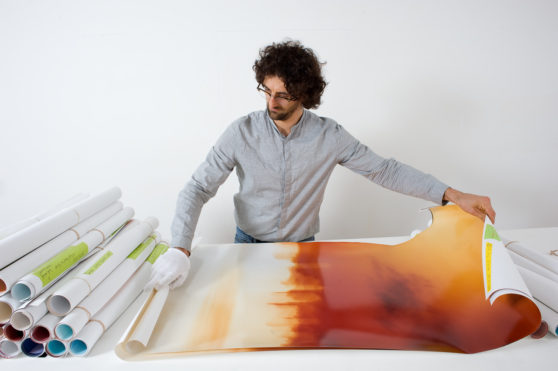 Maciej Markowicz at the studio with one of his paper negatives from the New York City series. Photo Credit: Phillip Reed

Now, the Moving Camera has moved to the water. On his boat, “the Obscuraboat” he continues using his signature process of mobilized camera obscuras (latin word for “dark room”) to “investigate the relentless forces of rivers and the nature of the water cycle.”

Despite no previous boat-building experience, Markowicz felt that the “the dream of making the Floating Camera was so strong that I had to make it happen no matter what.” With help from his brother and his best friend, they spent three months building the boat in Poland, before transporting it to Amsterdam and, over the course of another 4 weeks, putting on the finishing touches. In September 2017 the boat was put into the water and Markowicz has been living on it ever since. “My boat is my studio and the working photographic laboratory/camera, has naturally became my life.” It’s a “life of constant motion” he adds, playing into the project’s title. 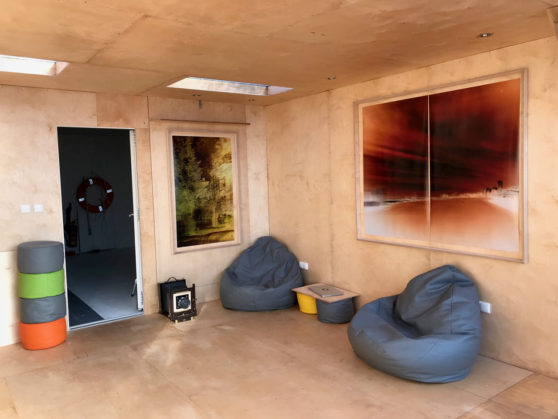 Artist living studio space on the floating camera with photographs from the project hanging on the walls.

In a world in which it is becoming increasingly difficult to distinguish yourself, Markowicz is taking a unique creative path. However, standing out has never been his intention; it goes much deeper than that, and is a natural progression for him. “I have always been searching to expand my photographic expression,” he told Resource, “[and] I was frustrated not being able to say what I wanted with just a picture…being inside the camera is [a] more intimate and performative approach to image making. As an artist I require a tactile relationship with [the] materials I work with.” 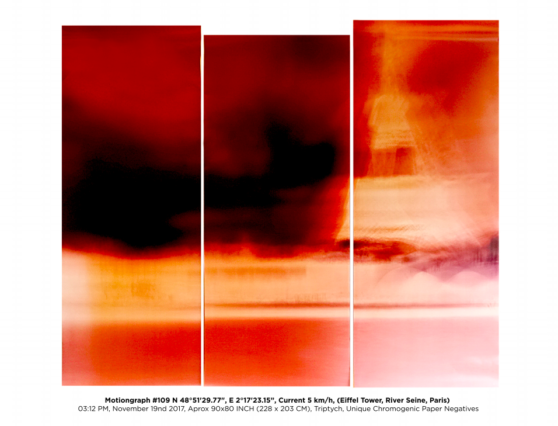 One of the large scale negatives made with floating camera in Paris. Courtesy: Maciej Markowicz

Not only is the process of capturing his image unique, but the images themselves are also very distinct as well. “I explore the limits of photographic expression,” he said. Using his moving camera, his procedure consist of skipping the process of developing film and instead exposing light directly to large-scale sheets of chromogenic paper. The result is a single, one-of-a-kind, color-reversed negative photograph.

So far, Markowicz has made it 1500 miles (2400 km). Of course, being on a houseboat, progress is slow, traveling at an average speed of 5 miles an hour (8 km/hr) for about 8 hours a day. Markowicz put it into perspective: “If you were to walk from Paris to Berlin it would take you more or less the same time and cycling would be 4 times faster.” This doesn’t seem to bother the artist, though, as he says “It creates a very special mindset. It’s just me inside the floating camera going through the ever-changing, slowly moving landscape. The unveiling horizons caught between vast skies and the water I was moving through.” 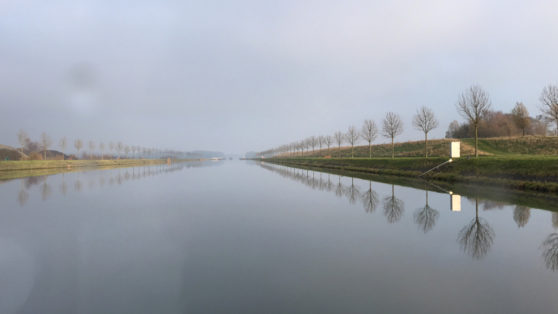 The floating camera has been a dream of his since 2012, long before the 2boats project came to fruition. And though he’s been traveling continuously since he left Poland in his early 20s, he still said that this trip “is probably the most challenging and at the same time exciting thing I ever done.”

And what’s next for Markowicz?

“I’m by no means done with this project, it is just the beginning. I’m already planning new The Moving Camera expeditions for the future.” 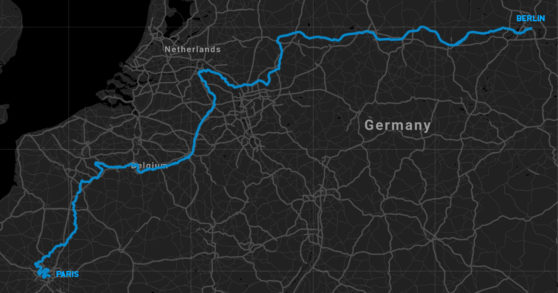 You can learn more from the project’s website: 2Boats as well as the Ubermut Project.

Cover Photo: “Maciej Markowicz arrives to Paris in his floating camera for ParisPhoto after traveling 680 km from Amsterdam on average speed of 8km/h.”