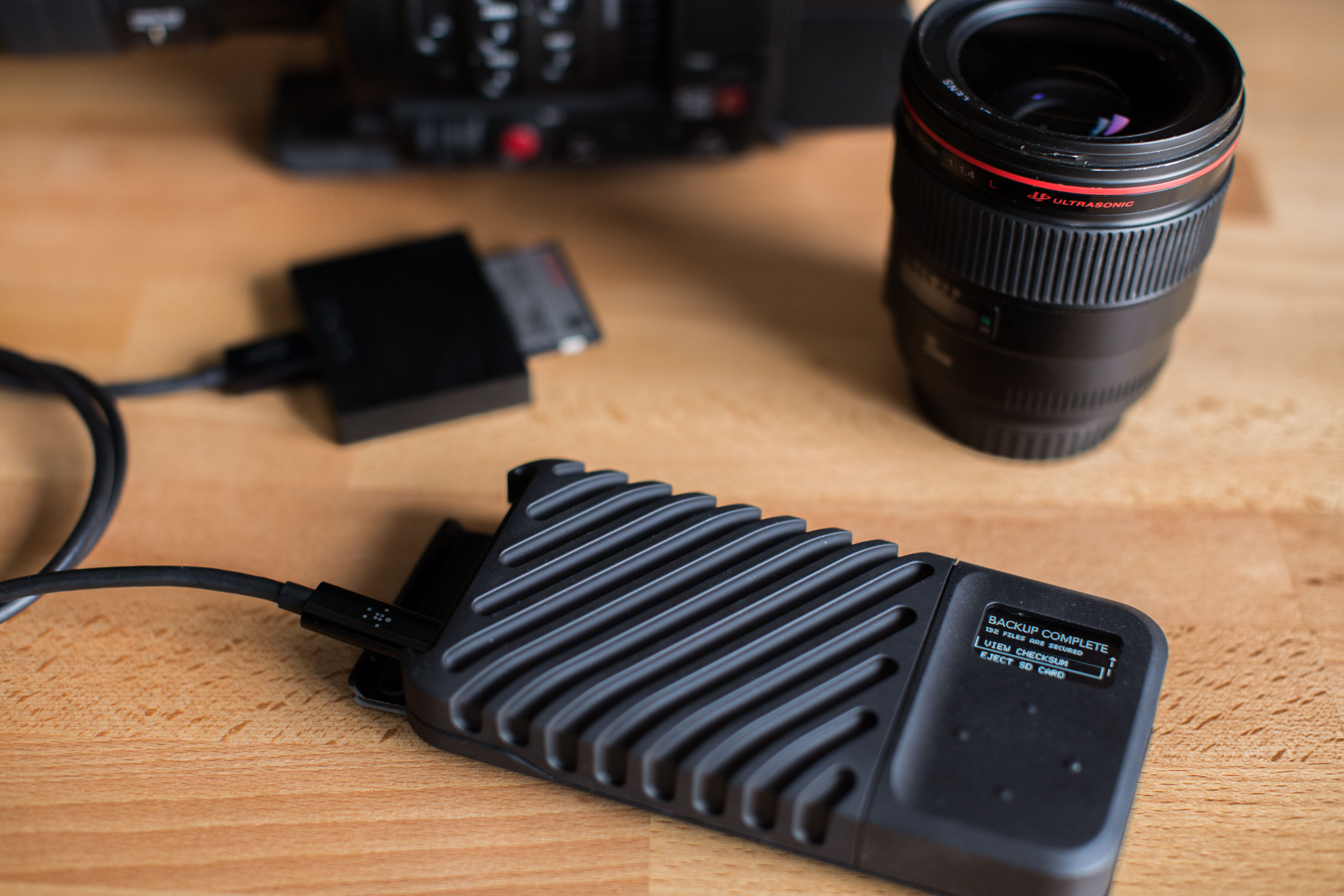 Tim Feess and Will Africano hit upon the idea behind Gnarbox during a car drive back from a ski trip. The adventurers had a GoPro full of footage, a desire to share that footage with the world, and the knowledge that editing footage “is always a lot harder than shooting it.”

“an integral part of my photography”

Knowing that the sooner they got down to work they sooner they could upload their video and share it, the pair was restless, wishing they could somehow get started despite being miles from a computer with only their tiny recording device on hand. Thus Gnarbox 1.0, the portable hard drive with on-the-go editing capabilities, was born. 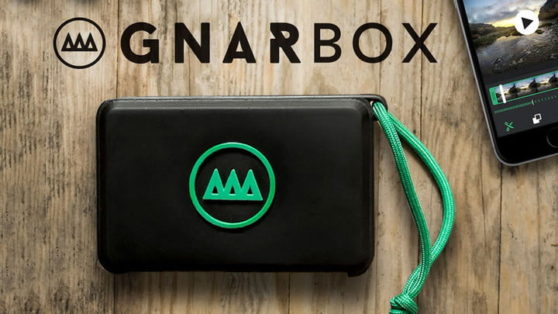 The original model was released in 2017, to much fanfare. I recall at this year’s PhotoPlus Expo one of its founders, Mr. Africano, entertaining a large crowd of creators eager to streamline their workflow. It’s currently sitting at 3.8/5 stars on Amazon, with one reviewer, Cris Mitchell, exemplifying the creators’ hopes for their product saying “it has quickly become an integral part of my photography and video kit allowing me to leave my laptop at home for most jobs.”

Under a year later, the team at Gnarbox is back with version 2.0, launching yesterday on Kickstarter. 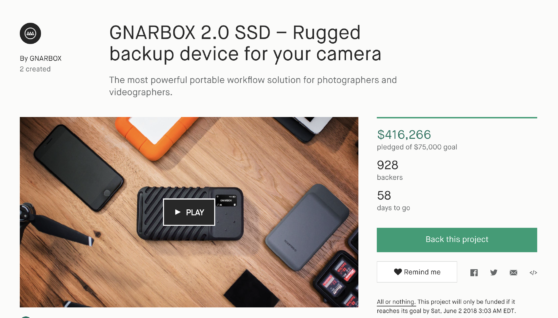 “not just an evolution”

Excitement for the launch was evident: the $75,000 goal was cleared in under five hours, currently sitting at over $400,00 from 913 backers. Pledging will be open until June 2nd, with rewards starting at $50 and actual product (a 128GB version) starting at $299.

Speaking to Mr. Feess and Mr. Africano, they stressed that 2.0 wasn’t merely a new iteration of Gnarbox, building on top of—and improving—existing functionalities, but rather a reinvention of the device to bring it better in line with the feedback they’ve received from creators.

One of the most surprising responses to the original model, they explained, was its embrace by the professional crowd.

Originally the two had envisioned Gnarbox as the enthusiast’s bridge between their activities and their online presence. Like their ski trip story, they imagined that others, too, would want a way to share footage quickly while on-the-go.

Instead, many professionals had also turned to the Gnarbox not as a final step in their editing process—while in a rush to share with friends—but as a stepping stone from outdoor shooting to their in-home editing suite. These users weren’t eschewing more high-end editing in favor of Gnarbox, but rather using the device to put them in a position—once back in front of their usual editing tools—to succeed.

In response, Mr. Feess told me, Gnarbox 2.0 “is not a replacement of your editing workflow,” but “a plug into existing solutions.”

To better bring Gnarbox in line with professional’s needs, they’ve added—along with an OLED display and four buttons—a group of apps centered around getting as much of your pre-editing and early retouching out of the way as possible.

The “Selects” app allows users to sort their images, preview their RAW stills, and lightly color correct. In addition to placing photos in  folders, it utilizes metadata for more extensive tagging. Its also been built to integrate with Adobe Lightroom.

The “Sequence” app is essentially a lightweight video editor. Capabilities include processing and preview, sorting into video bins, trimming and arranging options, and color correction. Like “Selects,” it offers integrated exporting to industry standards like Adobe Premiere and Final Cut.

The “Showcase” app is definitely not for the shy amongst us. It allows for the projection of images—both photo and video—onto a big screen, and, in full resolution, using mini HDMI. Whether you’re seeking clients’ input, chasing a closer look, or simply sharing with friends, “Showcase” makes content available now.

Gnarbox was always there to make sure your work isn’t for naught—it’s backup speeds are top of the line. In addition, they’ve added, in their “Safekeep” app, the ability to automatically upload folders to Dropbox over WiFi.

“it’s really about the creative process”

Gnarbox, Mr. Feess and Africano told me, “truly cares about creators.”  With their latest iteration, they’ve put their product where their mouth is.

In many ways, Gnarbox 2.0 and the success it has had on Kickstarter are emblematic of a more cooperative approach to device production. The pair managed to avoid the mentality, often found in brash start-up founders, that they knew their product—and its future—best.

Instead, they listened to their biggest fans and greatest detractors—oftentimes one in the same—to learn more about what their product should be, not resting on their haunches on what it is.

The result is a product launch that step-by-step answers consumer’s concerns. It’s also secured them a heavy-hitting endorsement by Chris Burkard, who found the original Gnarbox’s storage too minimal for his needs. 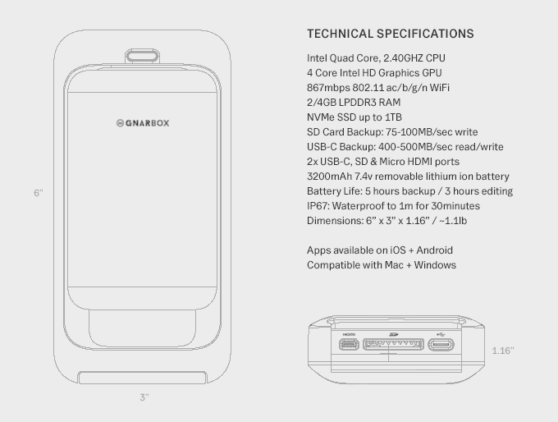 The device is set to ship to Kickstarter pledges by December 2018, when we’ll get a better idea of how these new capabilities play out in the real world. Review units, however, should be sent out soon, and we’ll update you on how those are received.

For now, it’s nice to see a dedicated group of designers producing a product increasingly meant to fill its customer’s needs, while adding capabilities as possible deficiencies are pointed out. This is the kind of win-win production that can occur when founders are willing to listen, and creatives are willing to speak. It also helps when the founders are using the product, too.

While they’re sure to make a pretty penny from their efforts, Feess and Africano don’t forget why they started Gnarbox back in that lengthy car ride returning from the slopes, eager to share what they had made. No matter where it goes from here, the pair explain, “it’s really about the creative process.”