KFC Marketing Team Blows Up With A New Ad Campaign

There’s nothing more saliva-inducing than fried fast food. And there’s nothing more badass than a good explosion in an action film. The KFC marketing team has brought these both together in their newest ad campaign for hot and spicy chicken.

After pairing with marketing team Ogilvy and Mather, KFC Hong Kong has released a series of images that, at first, you may not even recognize as an advertisement for chicken. Instead, you’ll see a fiery plume expelling from a rocket ship engine, and a cloud of exhaust forming behind a racecar. 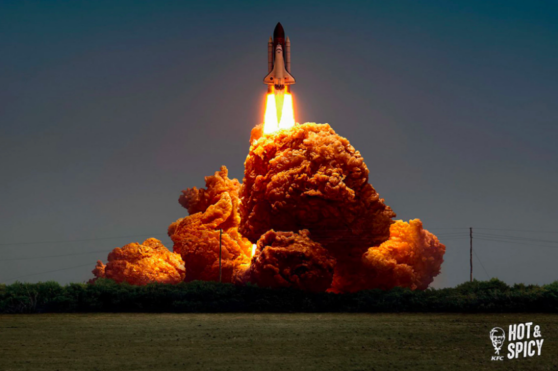 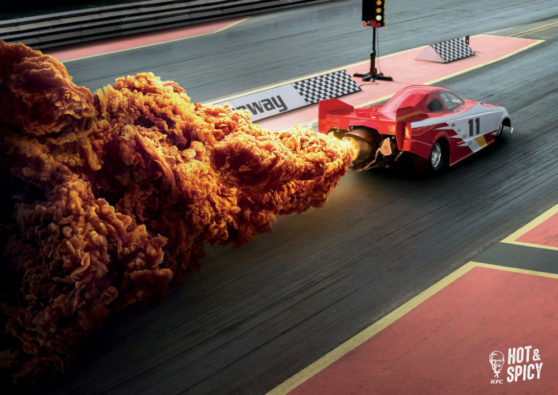 When you look closer, however, you’ll recognize that the explosions aren’t explosions at all, but pieces of crispy, golden chicken.

The idea came to the creative team at Ogilvy and Mather when they were eating the hot and spicy chicken. Instead of demonstrating the spice through the cliched watering eyes and burning tongues, they took on an entirely new approach. The explosive idea was so simple yet brilliant, that they had to go with it, even if the execution of the idea was quite the project.

The team had to study several images of explosions before they were ready to create the campaign. When they finally worked on it, they spent hours on the lighting portion of the project. They had to ensure that the chicken truly did look like it was making a bang.

Until now, most people have not been aware of the multi-million ways fried chicken can fit into action shots like these, but KFC has demonstrated that—with a little imagination—you can turn fried chicken into anything, even the backdrop of an action film. 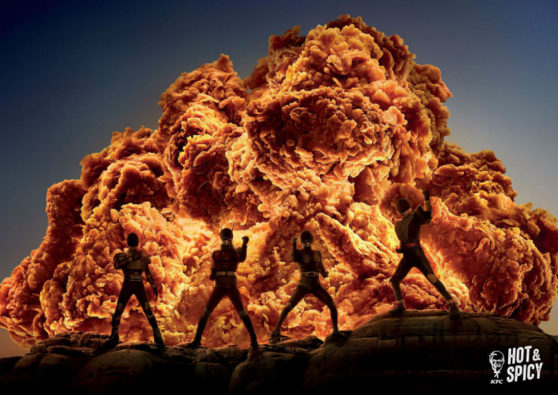 People on the internet have been inspired by the flaming photos, and have tried their hand at creating fried-chicken-art.  Some people have saturated the colors from the chicken and created clouds of smoke seeping out of volcanoes. Others have painted landscapes in which the rocky mountains look like they’ve been made out of fried chicken.

Truly, the KFC ad has done more than get us to salivate; it’s opened up a whole new world of opportunity. Before you know it, we’ll be seeing Big Mac Moons and Chicken McNugget trees.

That said, even if another restaurant was able to duplicate the brilliance of this campaign, it is doubtful that they could ever reach the standards that the KFC marketing team has set for the industry. Since 2016, KFC has engaged in more than one marketing stunt that has surprised and appealed to audiences

In 2016, the company released a KFC-scented candle, and In April of 2017, they sent a chicken sandwich up to space. The KFC marketing team is always seeking to wow their audience, and they have not disappointed with this campaign.