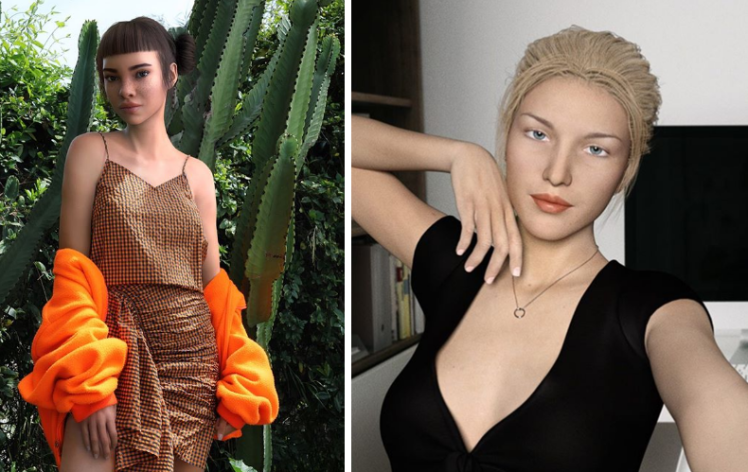 This is A First: Two Computer-Generated Instagram Influencers Feud

Okay, so there are these fake Instagram influencers that we wrote about a few weeks back. They are profiles of digital humans who post and pose like real humans (at least like real life Instagram influencers—which, we could get into whether they post and pose like humans but that’s not the point), but in fact are the work of a digital artist. These things are fully committed to playing it off like they are real.

So perhaps it was inevitable that a feud between two digitally created Instagram influencers would eventually happen…because in real life feuds happen (yes, even on Instagram) and why should this be any different? And yes, I realize that that that sentence is really fucking stupid. But what’s even stupider is the fact that, recently, this actually happened. Or kind of, ish.

This is what went down:

In the right corner, we have Miquela Sousa aka lil Miquela. With over a million followers, the 19 year old Brazilian-American uses Instagram to showcase her life as a model, singer (she has two singles on Spotify), and overall trendy-hip ass chick.

In the left we have Bermuda, a Trump supporter and Iggy Azalea fan, who went from 2,000 to 60 thousands followers over the course of this dispute.

In August, Bermuda posted a photo with the caption: “@LilMiquela you can only hide for so long.” A few months later, in January, Bermuda posted a quote of Lil Miquela stating  “I live for the drama” when asked about internet hate. Bermuda then added “I don’t think you ‘live for’ the kind of drama I have in mind. Just remember…you brought this on yourself.”

Finally, a few days ago Bermuda said the following in a post: “Ok, Miquela. I tried being nice. I called, I texted. I didn’t want this to be hard, but you brought this on yourself. See you tomorrow, world”

So, on Tuesday, Bermuda hacked into Miquela’s account, deleted all her post, and then shared six of her own post (four of which were selfies). In these post, amongst other things, she called Lil Miquela a “fake ass person” and told Lil Miquela that she would only give her her account back once she told people “the truth.”

I know, this is a lot to handle.

Bermuda eventually gave Lil Miquela her account back and all her photos were restored, but the kicker is that Bermuda told her she had 48 hours to “tell the world the truth” or she would do it for her.

The two influencers “met” and even shared a picture of the two of them together. In the caption, Bermuda wrote: “More emotional than I thought it would be. Despite it all, there’s only three of us out there and we need to stick together. We talked it through and she said she’s going to come clean tomorrow.”

In the post she says that the “truth” was revealed to her by Bermuda. And to sum it up, she thought she was real, her life is based on real person named Miquela Sousa, her creator lied to her and so did other people, and now she knows the truth but is having trouble accepting it. Shit, just read the post below. It’s as weird as it sounds.

So what is this? A publicity stunt? But for what? More followers? I guess that worked. I’m writing about it now.

Fuck if I know.

The world is a strange place right now.