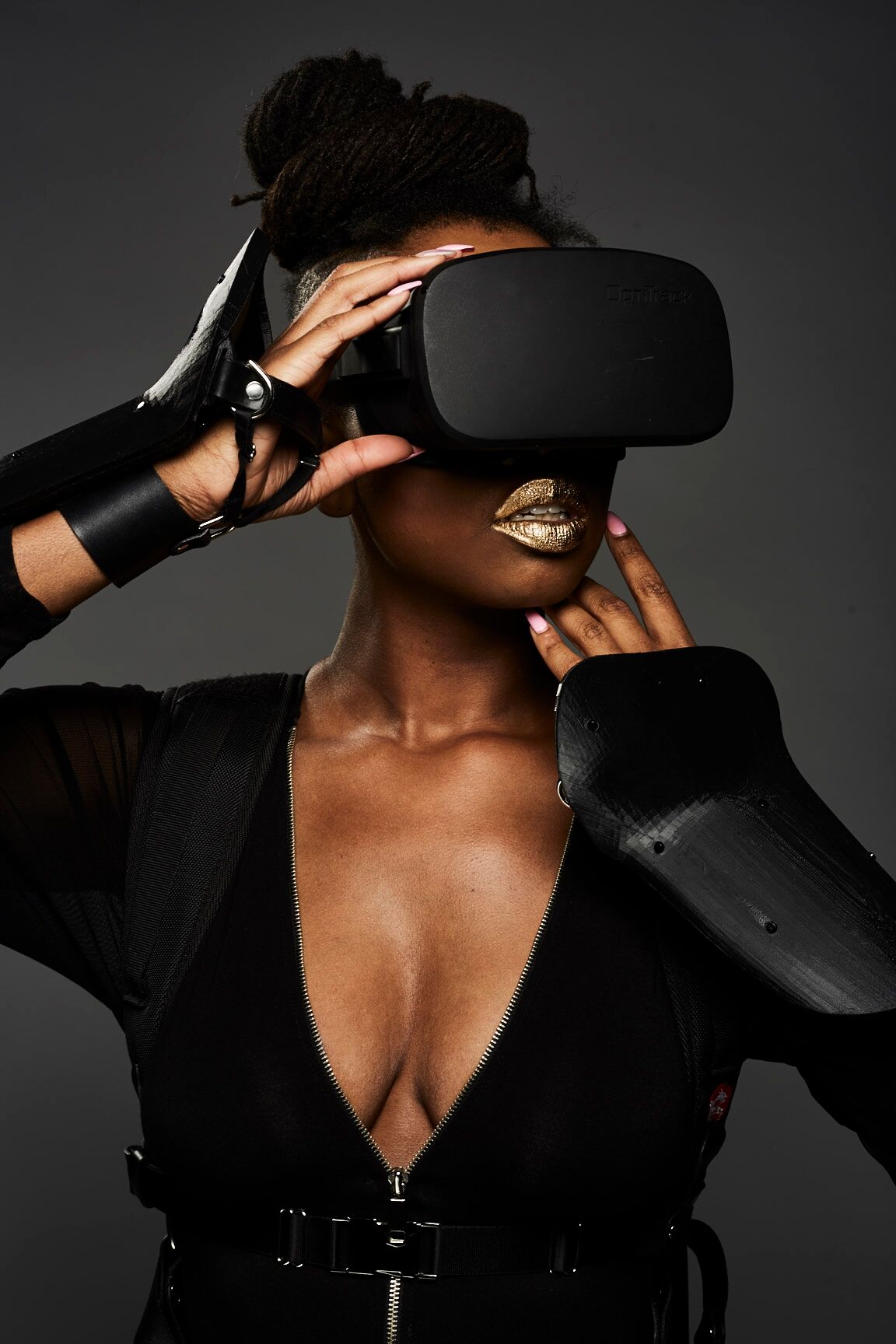 We Visited The VR Exhibit At The Museum Of Sex: Here’s What We Saw, Heard, Touched, and Felt

We entered a dark room lined with velvet rope. Walking up three flight of stairs, we entered an even darker room. Two plush leather benches stood ahead of us, the kind you’d expect in a museum housing a bar serving breast-shaped jello shots. To our right, conspicuously good-looking flight attendants stood behind a counter, ready to book our trip to “space.” 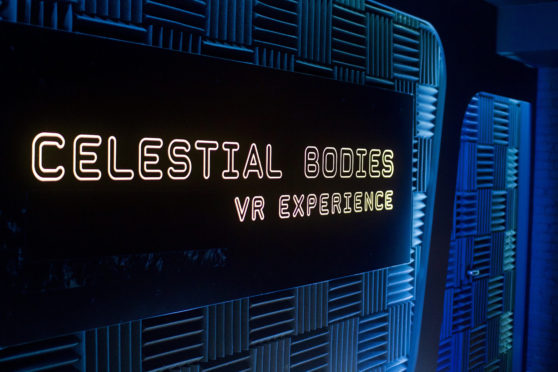 When Resource first heard of Celestial Bodies, we assumed we’d be visiting. Promising great visuals, loud music, and raunch, you could say the exhibit found us. So after clearing it with HR—the exhibit is billed as a “couples” experience, after all—two us headed up to the Museum of Sex in downtown Manhattan.

The gallery itself is limited to four participants at a time—we waited in a dark room lined with black foam, with various cubes glowing a dull white serving as seats. Packing our excess gear into lockers, we were offered shots. Soon, our names were called. We were shuttled down a hallway of numbered doors to which we were each assigned. Entering mine, I was greeted by another space-flight attendant, this time serving as my guide. 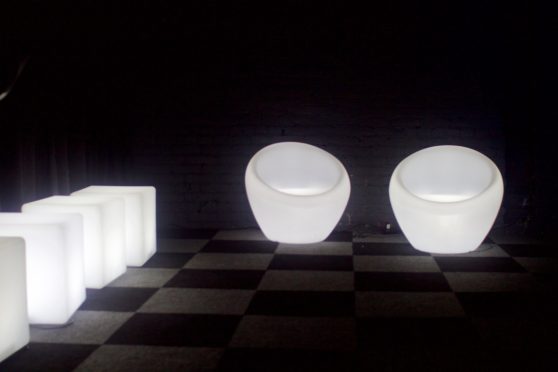 Led to a circular platform, my back against the wall, an Oculus headset was placed over my eyes, headphones over my ears. Empty space occupied my vision in all directions, while a large pink sign ahead of me announced I had entered “Celestial Bodies.” The electronic thumping of Diplo, meanwhile, drowned out my inner monologue. After a brief ride in an “elevator”(the VR had begun), its doors opened, inviting me to emerge outward onto a platform of nothing but empty space.

One of the more miraculous parts of VR is its ability to stoke the fear of death. One time while playing “Richie’s Plank”—a game in which the user walks across a plank stuck out from the roof of an 80-story building—I found myself completely unable to move, despite the attendants’ prodding. Similarly, a zombie racing in my direction once made me call for help. So when a voice told me to leave the elevator in “Celestial Bodies” and I looked down, seeing nothing visible to step on, I thought, “Oh shit.” I was not surprised to hear afterwards that others had in the past requested to exit the game at this point—I considered doing the same. 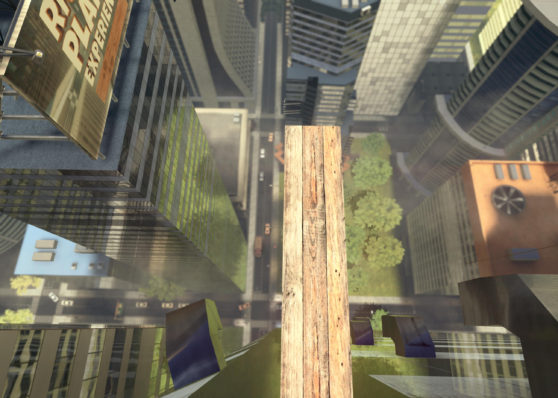 The view from “Richie’s Plank”

Luckily, “Celestial Bodies” offers a saving grace: railings. Holding on for dear life, I made my way to the platform where the experience was to take place, pride intact. The area was delineated by gridded lights on the floor, and besides these indicated boundaries, we were free to roam. In my less self-conscious moments, I even danced.

The show includes two main attractions, one after the other. First, an infinitely long stripper pole appears in the platform’s center, descended by nude, metallic woman in various poses indicating their wealth of core strength. I reached out to feel them, as advised, but to no avail—they disintegrated at my touch into tiny pink particles.

After a few minutes, the pole disappears and another figure steps onto the scene. This one appears angelic, surrounded by feathers and, rather than suspended in air, walking amongst our group. As I go to touch, I am surprised as I am touched back. The feathers, as it turns out, are very real, and extremely soft. I nervously laugh as they cross my skin, at once embarrassed and at ease. 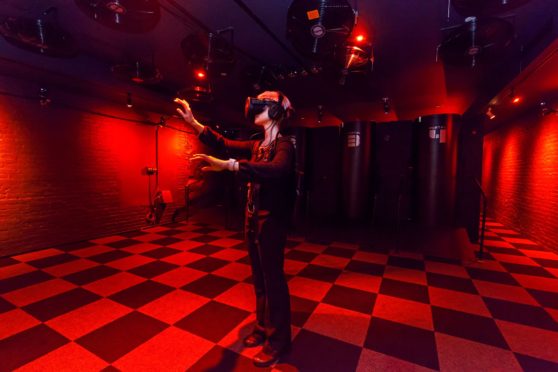 Eventually a voice comes over the audio channel announcing the experience has ended. To preserve the integrity of the virtual realm, “Celestial Bodies” employs a unique way of disengaging—my original guide was suddenly beside me, unseen, and took my hands, leading me out. When the headset is finally removed, I’m back where I started: dressing room #4.

Exiting to the lobby, my partner’s dumbfounded face tells me all I need to know. A VR rookie, I figured he’d be a good gauge of the average museumgoers’ experience. Turning slowly as if still unsure of his reality, he said to me, verbatim, “Fuck!”

As for me, this wasn’t my first VR rodeo. What makes “Celestial Bodies” unique in my experience, however, is its focus on unadulterated pleasure. Unlike gaming or educational programs, it doesn’t require the user to do anything, but urges them simply to take it all in, touching or doing whatever they should desire. For a museum dedicated to hedonism, it makes perfect sense. 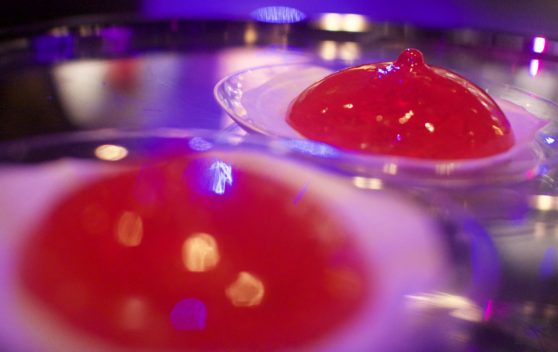 Over breast-shaped jello shots in the bar afterwards, my partner struck a more somber tone in reflecting on what we had just done. The possibilities of VR had sunk in, it seemed, and he was worried. We had just heard a tale of an elderly couple who, forgetting that what appeared in VR to be “space” was in fact an empty room full of employees, had taken the first step towards satisfying agoraphilia—it’s that immersive.

“I mean Jesus,” he continued, as I wiped red sticky jello off my chin hairs, reading an article on my phone and only half listening, “we can’t even get off of Instagram, how the hell are we supposed to ever leave VR?”