Spencer Tunick is an artist known for photographing masses of people in the nude.

But not in a creepy way.

The New York-based artist has staged 125 mass nude installations in 25 countries throughout his 25 year career.

In 2007, his biggest installation consisted of 18,000 people baring it all in Mexico City’s central plaza. 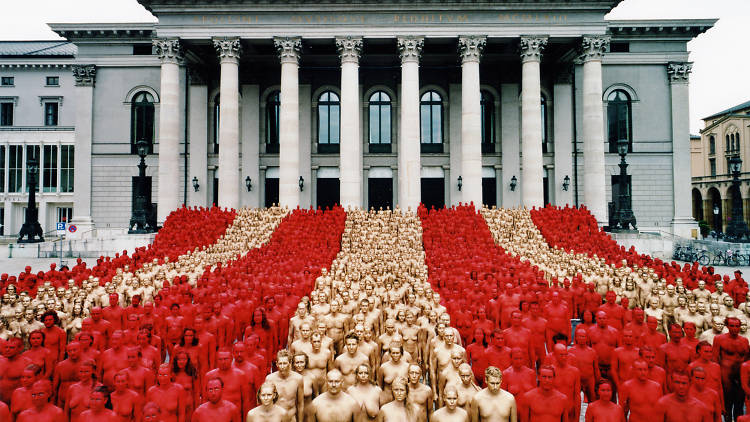 The photographer is at it again, looking for people of all body shapes, genders, races, and ages (over 18) for the Provocare Festival of the Arts in Melbourne, Australia. The installation will be called “Return of the Nude” and takes place over two days on Melbourne’s Chapel street.

Influenced by both land art and performance art, Tunick uses the nude body as raw material in the architectural landscape to transform and intervene with a chosen site. He combines video and photography to document the whole thing.

The project’s website describes the intentions behind the artist’s work:

The poetic whole resulting from individual bodies arranged in a sculptural way in an urban setting challenge traditionally held views on nudity and privacy as well as social and political issues surrounding art in the public sphere.

Tunick said that the people of Melbourne are the perfect candidates for such a job, citing their willingness to brave any weather condition mother nature throws at them, as well as their resilience and willingness to take risk.

Tunick speaks from experience, having photographed 4,500 nudes in Melbourne back in 2001. Also, in 2010, his installation, titled “The Base”, consisted of 5,000 people posing nude on the steps of the Sydney Opera House.

If you are willing to fly out to Melbourne, volunteers are welcome. Compensation will come in the form of a limited-edition print of the installation (so if you were thinking of doing this just for a hefty paycheck, maybe consider Spearmint Rhino). The installation will move forward no matter the weather, but, the website assures you, the “nudity will only be required for a short time.”