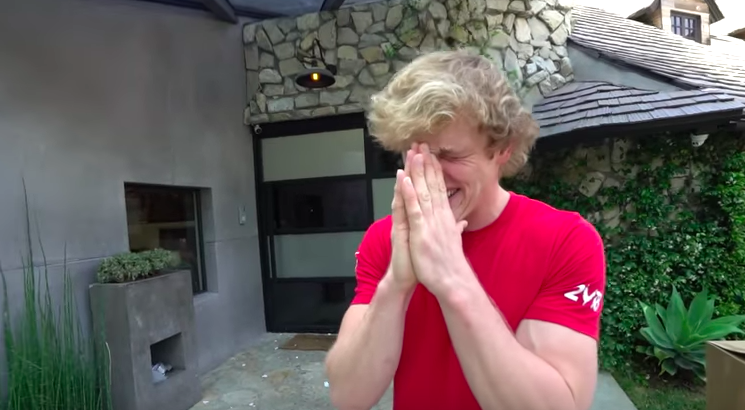 Relentless YouTube personality Logan Paul had a big announcement for his viewers this weekend.

After almost two years of persistent vlogging, he declared, he would be ending his quotidian content creation in pursuit of other creative endeavors.

This all comes after a rough year for Paul, who has stumbled into quite a bit of controversy in recent months. For those in need of a refresher: the constitutionally unruly vlogger crossed a line this past December when he posted a video in Japan’s Aokigahara (also known as the “Suicide Forest” for being the location of the second most suicides in the world behind the Golden Gate Bridge). The vlog featured Paul and his friends goofing off as they joked about suicide and—if that weren’t bad enough—ended with footage of an actual suicide victim.

The video is highly disturbing, with Paul seemingly oblivious to his insensitivity, and received harsh backlash from just about everyone—celebrities, subscribers, and even the higher-ups at YouTube.

Ad revenues were suspended from Paul’s account, along with in-the-works YouTube Red projects, and the vlogger disappeared from the spotlight to “reflect” on his actions.

Fast forward a little over a month, and Paul returned to YouTube at the end of January with a video titled “Suicide: Be Here Tomorrow.” It aimed to teach people about the realities of suicide, while giving Paul the chance to apologize for his insensitivity, and claim that he is ready to turn a new page moving forward.

This “new” Paul, however, lasted all of 30 seconds. The shenanigans soon begun again: Paul released— in rapid succession—videos of him tasing a dead rat, takes a koi fish out of a pond and giving it pretend CPR, and encouraging viewers to partake in the dangerous “tide pod challenge”. Cue take two of YouTube suspending his ad revenue and halting his projects, while releasing a statement reading: “This is not a decision we made lightly; however, we believe he [Paul] has exhibited a pattern of behavior in his videos that makes his channel not only unsuitable for advertisers, but also potentially damaging to the broader creator community.”

Nonetheless, Logan returned to regularly producing content, culminating in his most recent announcement of retirement.

The announcement video, titled “THE END OF LOGAN PAUL VLOGS…”, begins with the rambunctious Paul buzzing outside a house in his signature manic style, where he drops lines like “I’ve diversified, bro”, smashing a glass plate against the wall, and dabbing a number of times.

The video moves on to Paul picking up a pimped out Mercedes and driving around with his friends. Finally Paul gets serious as he begins to announce that he is done with vlogging, but, siiiiiike—he’s only done with daily vlogging. He will still continue to produce videos for his channel, shouting incredulously, “What am I, a bitch?!”  *Sigh*

What lies ahead for Paul is unknown, though he assures fans that he has projects in the works across the entertainment industry, and will only continue to get “more and more and more lit.”

Either he is prophesying his own fiery self implosion or we are about to see an even rowdier Paul away from daily vlogs. Stay tuned.