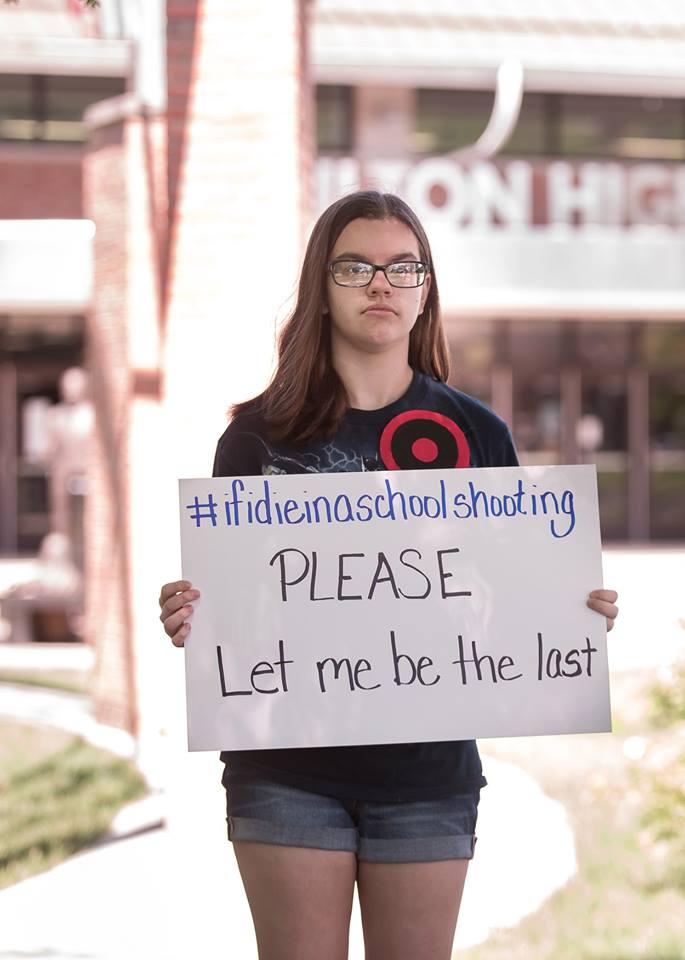 In an age in which activism has increasingly become propagated by children and dispersed through the Internet, a new viral photo series that has emerged from Ohio encapsulates both of these uniquely modern trends.

The pictures were taken by professional photographer Christina Angel, but the true inspiration behind them comes from kids themselves. When Angel came across the Twitter hash tag #IfIDieInASchoolShooting, she knew she wanted to give students—including her own teenage daughter—a visual platform through which to disseminate their timely message. She quickly scheduled a photo shoot at Hamilton High, located in a conservative part of Ohio, and the resulting images are profound.

The pictures depict students raising up signs that finish the hash tag, outlining in no uncertain terms their fears, anger, and frustration with the prevalence of mass shootings in today’s society. This younger generation wants adults to know that far from an abstract political issue or CNN roundtable debate, the increased prominence of gun violence in schools is a reality that they must live with every day.

The individuals participating in the photo series range in age, from a girl who appears to be no older than five, to seniors in high school. Their stark messages make sure to sugarcoat nothing. One boy ruminated on how his mother would deal with his death were a gunman to terrorize his school:

Another student held a sign urging audiences to “remember MY name, NOT my murderer’s”, calling attention to the fact that too often the media gets bogged down in reporting salacious details about perpetrators rather than focusing on the victims:

A teacher included in the series, standing next to one of her students, carried this poignant message:

As you may have noticed, the people in the photos all wore felt targets over their hearts—a sobering symbol, no doubt, but nonetheless fitting for the subject matter.

Somewhat unsurprisingly, some on the internet became enraged about the pictures, taking issue with what they perceived to be a Left-wing attack on gun rights. In response, Angel wrote in a Facebook post,

“This isn’t anti-gun. It’s not political. I would think that either side can agree to the overlying message here which is dying children= bad.”

While perhaps not overtly political, it is heartening that these young adults are taking a stand to protest a f**ked up situation that directly impacts themselves and their peers. Rather than staying quiet and accepting what they deem unjust, the participants in this photo series, as well as thousands of other minors around America, are making themselves visible, and thus making themselves heard.

To view the rest of the series, click here.