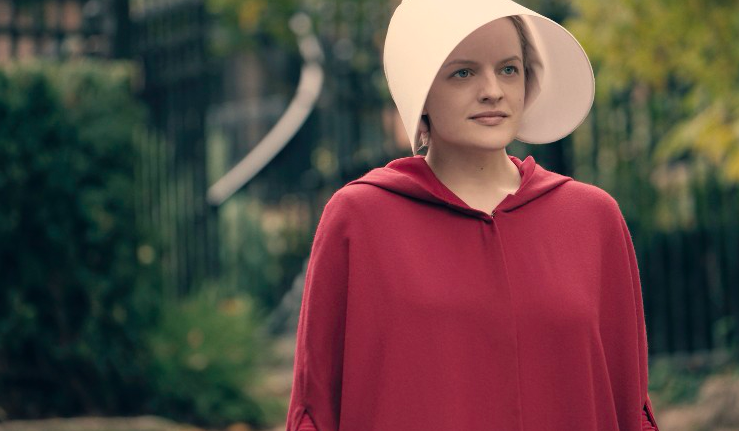 We Need To Talk About The Handmaid’s Tale’s Cinematography

If you haven’t already heard, Hulu’s The Handmaid’s Tale is one of the best shows on television right now…maybe the best. The script, the acting, the music, the directing—every element of the show works together to create an utterly compelling dystopian narrative based off of Margaret Atwood’s 1985 novel of the same name. Perhaps the most underrated component of the show’s ghostly tone, however, is the cinematography. 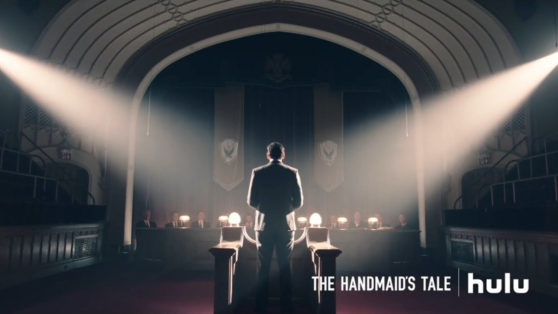 Cinematographer Colin Watkinson and director Reed Morano were in for a challenge when they began to formulate their vision for the show.

While the fictional Gilead, formerly the United States, is a country where enslavement and horrifyingly restrictive laws are the norm, this antiquated way of life actually takes place in the prospective future, hence its dystopian categorization. This means the creative team behind the show needed to capture the eery, out-datedness of Gilead, while being careful not to accidentally turn it into a period piece by allowing a bit of modernity to shine through. It’s a tall order, and Watkinson and Morano absolutely nailed it. But the question is: how? 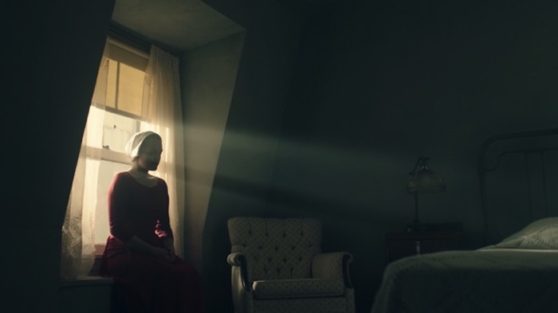 The most striking thing about the show, visually speaking, is its lighting. Take, for example, the shot below. Streaks of light pour through the blinds of protagonist Offred’s (Elisabeth Moss) window as she sits on the sill, contemplating her situation. In another moment rich with meaning, a single beam of sunlight casts the sole source of illumination in a dark and tense courtroom.

Clearly, natural light is as valuable an asset to the show as the characters themselves. This embrace of minimal, natural lighting is achieved by using dark and textured backgrounds that catch the light in interesting ways, creating a depth quire specific to the showrunner’s visions. 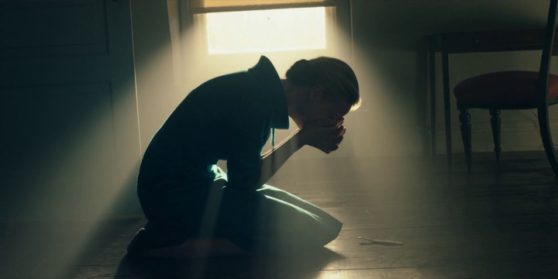 Aside from the way sunlight is used, the show employs meticulous composition to achieve its effect. Utilizing a style à la Wes Anderson, Watkinson favors the symmetrical;  the main attraction of each scene is often centered to the frame of the shot. This can be seen in the way Serena Joy ascends the staircase with the chandelier and the window framing her figure perfectly, and in the way Offred and Aunt Lydia occupy equal segments to the left and right of Offred’s bedroom window. Finally, and most acutely, Offred’s close ups fill entire shots, her eyes fitting the frame better than a pair of glasses. It’s so well balanced that it feels uncomfortable and inorganic, giving Gilead and The Handmaid’s Tale‘s world a surreal, artificial feel.

With Watkinson’s measured use of lighting and composition, it is fitting that his use of color be just as unique and important to the show’s vision. The entire shows is lacking is vibrant color, each shot more subdued than the next, a pale mix of neutrals, reds and blues. The color scheme seems constantly enshrouded by a vintage tinge, feeling more like an early 20th century photograph than a 21st century television show.

Though it isn’t a unanimous aesthetic; when venturing into flashbacks, Watkinson introduces color in a slightly more familiar way, reflecting a time before this antiquated way of life was implemented. When we find ourselves back in Gilead though, the life quite literally drains from the frame.

Check out The Handmaid’s Tale on Hulu to experience this smart cinematography for yourself. I promise it’s worth it.