Instagram photographer Daryl Aiden Yow, who has 104K followers, was recently caught posting stock photography to his page and claiming it as his own.

For someone who has used the massive reach of the internet to establish a fanbase with their artistic endeavors, you would think they would be aware that their audience has the same access to the very medium that has put them on the map. To put it more simply: how in the fuck did he think he was going to get away with it?

Though the Singapore-based artist had been called out in the comments section of his posts on numerous occasions, it wasn’t until Singapore’s internet media company Mothership decided to make a stand against the thief that his shady behavior came to light. They wrote that Yow is:

“embroiled in a saga where quite a number of his Instagram posts — including sponsored ones — bear just about 100 per cent similarity to images taken from stock photos and other photographers.” 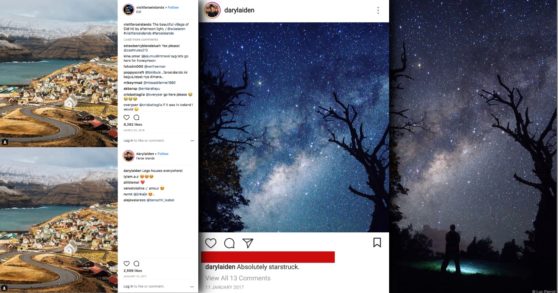 Yow took photos from sites such as Shutterstock and Unsplash, but went beyond that: in one example he used a photo from a travel book published in 2012.

Though in most cases, he did make an effort to make some changes to the original photo—changing the color, reworking the composition, flipping the image, photoshopping himself into the shot, etc.—there were some photos that were simply a copy/paste job.

Again, how in the fuck? 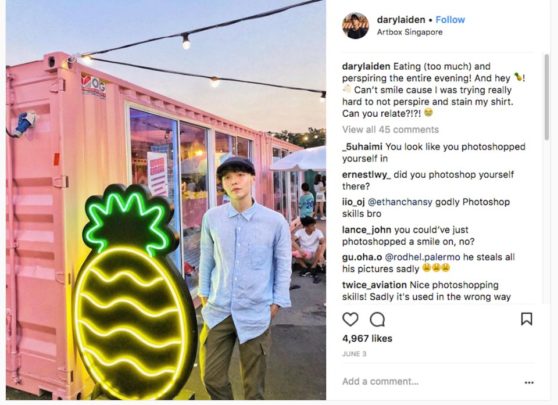 His followers calling him out hard.

Yow, with his back up against the wall, decided to come clean. Not long after the Mothership article was published, he deleted all of his Instagram posts. Afterwards, he uploaded a single black imageless square and in the caption, wrote a long apology to his followers:

“Having marketed myself as a photographer,” He wrote in the post, “I fell far short of what was expected of me and disappointed those who believed — or wanted to believe — in me. For all of that, I apologise.”

Yow had been working with brands such as Sony, Oppo, and Uniqlo before all this occurred. I can only imagine that they all collectively sighed and said, “How in the fuck did he think he was going to get away with it?”

You can check out more examples of his thievery at Mothership.

Or read the full statement from his Instagram here.