“Don’t Be Evil,” “Broadcast Yourself,” “Share The World’s Moments”: these are just a sampling of the tech world’s most well-known corporate catchphrases, bringing to mind smiles, rainbows, and furry rabbits. But—slowly—these glosses on the business of software are fading away, in some cases more optionally than others.

Next on the chopping block appears to be Twitter, after a judge ruled last week that the site’s penchant for suspending accounts “at any time, for any reason or for no reason,” may leave the company—which calls itself a platform for free speech—open to charges of fraudulence. Speech, the judge implied, is in fact much less “free” on Twitter than the company would have users believe.

The issue found itself in the courts after Jared Taylor, founder of the New Century Foundation— an organization the SPLC describes as “a self-styled think tank that promotes pseudo-scientific studies and research that purport to show the inferiority of blacks to whites”—sued the internet giant for violating his free speech rights after he was banned from the platform. While his claims of free speech were rejected outright, the case wasn’t dismissed, for the aforementioned possibility of fraudulent branding.

In recent months, some of the largest tech players have undergone slogan changes to rein in the linguistic excesses of a more optimistic time: Google eschewed “Don’t Be Evil” for the tamer “Do The Right Thing,” while Facebook pivoted from “Making The World More Open” to “Give People The Power To Build Community And Bring The World Closer Together.” 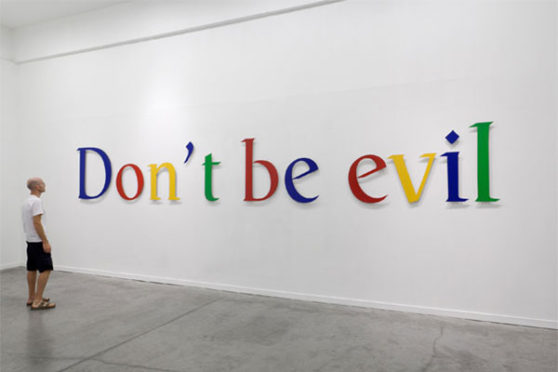 Google’s motto from a simpler time

Twitter’s own self-description was made clear in 2012 by then-general manager Tony Wang when he called the platform “the free speech wing of the free speech party.” At the time—and this was before Twitter began suspending personalities such as Milo Yiannopoulos and Azealia Banks—Wang declared the site “remain[s] neutral as to the content” posted on it.

As more and more tech giants grapple with their newly understood social import, as well as the effects that negative public perceptions have on their bottom line, we’re likely to see increased self-regulation, as the case of Twitter has made clear. The question is whether they can revamp their branding quick enough—from naive optimists to responsible stakeholders—to keep up. If not, Mr. Taylor may have just exposed a potential legal weakness for them all.