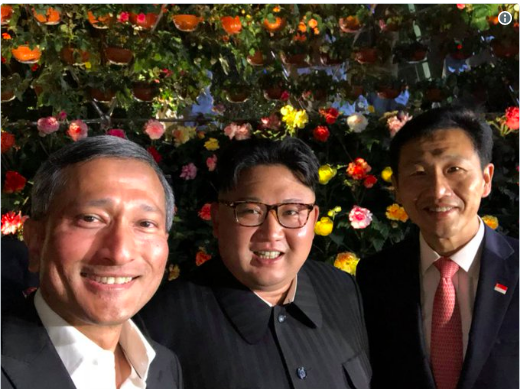 North Korean dictator Kim Jong Un and United States President Donald J. Trump will be meeting for a historic summit in Singapore on Tuesday. The talks will no doubt be of huge political import for both countries involved, as well as for countless other nations around the world. And with nuclear tensions heightening recently, the outcome of their conversation could have potential consequences for every Earthling.

However a recent Instagram post has eclipsed the importance of any of these trivial matters, because Kim Jong Un has appeared in his first public selfie, and he looks thicc as f*ck.

The picture, posted to the foreign minister of Singapore’s account, has gone viral. Maybe it’s the oddity of an authoritarian leader known for suppressing most forms of social media within his own country posing casually for an Instagram picture. Maybe it’s a badly needed moment of levity amidst a news cycle that has been filled with a continuous series of bad news, followed by worse news. Or maybe the photo has gained so much internet notoriety simply because Kim Jong Un looks like someone you’d swipe right on.

I mean look at that smile. Those cheeks! As Bella Hadid would say, “homeboy can like…get it.”

Anyway, here’s the shot. Make of it what you will.