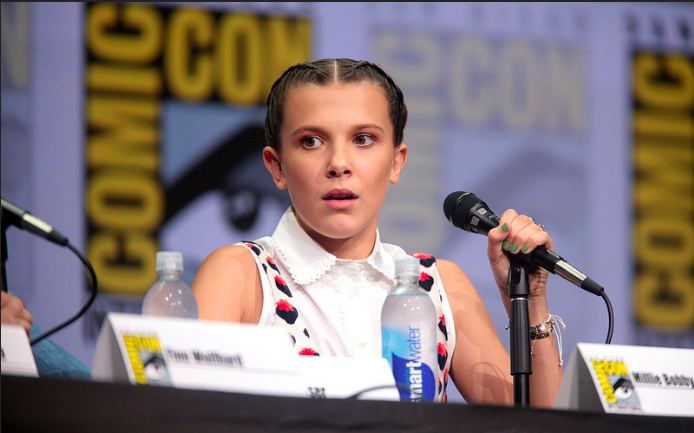 You probably know her as Eleven, the badass, super-powered little girl from the hit Netflix original series, Stranger Things. However Millie Bobby Brown has recently been in the news for a different reason. Last year the hashtag #TakeDownMillieBobbyBrown began trending on Twitter, and over the past few weeks—coinciding with the start of Pride Month—a series of rather distasteful memes featuring the young actor have been circulating throughout the internet. The images consist of edited screenshots of Brown’s social media postings, revised to include violently homophobic captions.

The pictures chosen for the memes are all completely innocuous and mundane shots of the 14-year old celeb performing everyday tasks such as drinking coffee or sitting in a car. Some of the edited images were taken from her Snapchat, others from Instagram. Some commenters defended the memes, saying that they were tongue-in-cheek, albeit controversial, jokes, many of which were in fact produced by members of the LGBTQ community. However others were quick to weigh in in defense of Brown, as well as to denounce the hateful speech contained in the captions.

This is not the first time that discussions around the child actor have been controversial—when she began dating her boyfriend, Jacob Sartorius of Musical.ly fame, many thought that the overwhelming coverage of their relationship on media outlets was inappropriate, due to the stars’ young age.

The uproar has culminated in Millie deleting her entire Twitter account, understandably unwilling to deal with any more abuse from strangers on the Internet. The unfounded accusations of homophobia were hurled at the underage star despite, or perhaps in part because of the fact that she has been an outspoken advocate for LGBTQ rights, including GLAAD’s Together movement.

Brown has not taken steps to delete her other social media accounts, including Instagram, and hopefully the fiasco will die down enough for her to reinstitute Twitter soon.