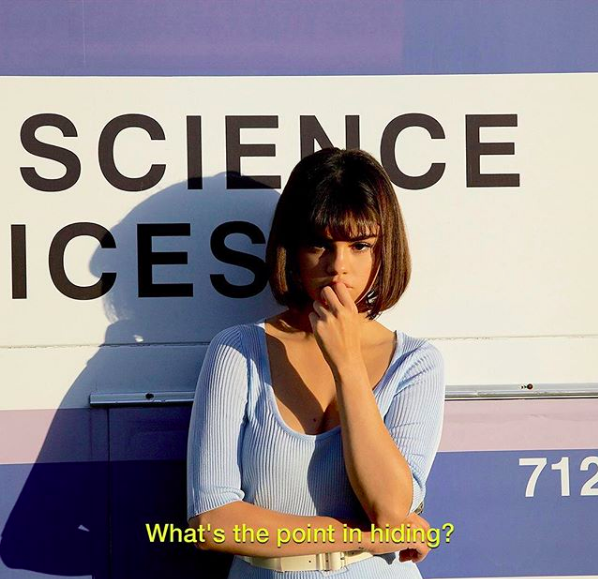 For anyone who perused Tumblr circa 2011, the style of images should look familiar—beautiful women in undergarments or retro-looking designer clothing looking mournful, wise, and/or contemplative, in scenes that appear as if Terry Richardson had directed Mad Men. The poetic subtitles which lend the images their status as Internet icons are angsty and also vague enough to ease the heartbreak of any seventh grade girl.

However, despite their seemingly ubiquitous nature, recent allegations of plagiarism directed towards pop queen and media darling Selena Gomez have suggested that this aesthetic is not actually up for grabs, but is attributable to a specific artist by the name of Sarah Bahbah.

For context, here are some of Gomez’s posts:

And here’s a selection of Bahbah’s:

Gomez, who released the now-controversial images as promotional material for her new song, “Back To You” (cause as we all know she’s now back with token boy Justin Bieber), has come under fire on the Internet from fans of Bahbah’s. The concerned parties asserted that the aesthetic of the pictures was too similar to not have given credit where it was due. One commentator wrote,

“It’s not just captions. The entire composition, coloring, lighting, and theme is blatantly taken from a much smaller artist to make a living. Obviously, people take inspiration from one another, but sarah bahbah should receive credit for creating and refining the style that ‘influenced’ these photos [sic].”

Of course, it’s not that hard to be a “much smaller artist” than Selena, who is currently the most followed person on Instagram. Others, such as the Twitter users shown below, didn’t buy the plagiarism argument, saying that the style was not unique enough to warrant the critiques being made:

While fans on both sides of the Selena/Sarah divide are up in arms about the issue, neither artist has weighed in yet.

To remain neutral, here’s a link to both Instagram accounts, so you can decide for yourself.