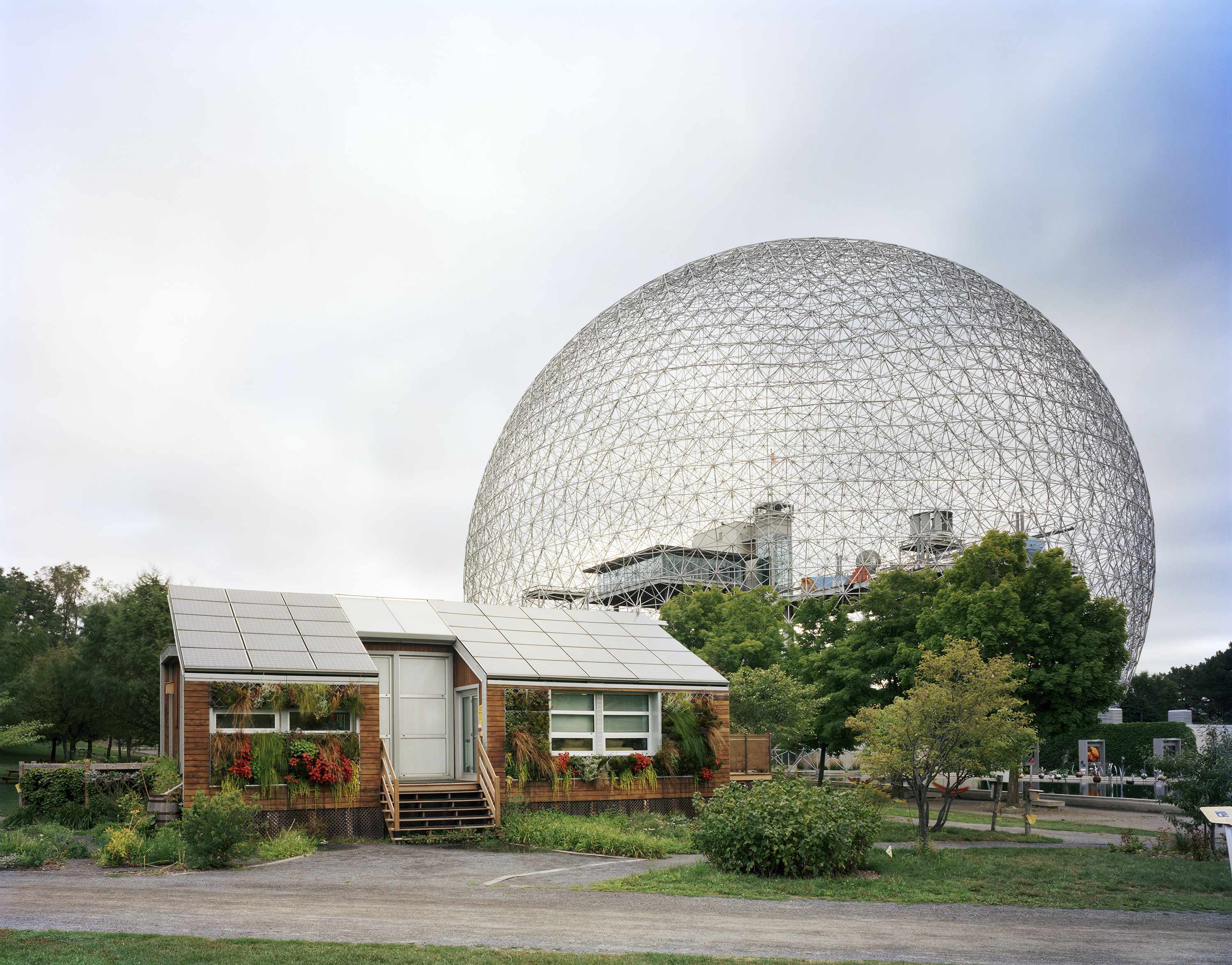 An Interview With Jade Doskow, the Architectural Photographer Behind “Lost Utopias”

Jade Doskow is an internationally acclaimed large-format architectural photographer. That may seem like quite the mouthful. But back when she was growing up, Jade was simply a little girl inspired by the flair of her mother’s “hippie artist” friends. The American-born Doskow spent a lot of time drawing and writing as a kid, and even as a child she recalls being “sensitive to environment and architecture.” However, it wasn’t until she began school at New York University that she had the chance to formally study the craft of photography.

Jade was going to school and working as a bicycle messenger—a job she was “very passionate about”—when she was involved in a bad accident. She describes how the experience of being bedridden for an extended period of time allowed her to “[turn] the depression and feelings about that experience into photography”, which she had just begun to learn. Perhaps the accident was a blessing in disguise of sorts, because several of the images she produced during this time ended up winning her a visual arts award at NYU, at the young age of nineteen. After this, Jade “started to…think that there was really a way to connect with people through this medium.” Her passion was ignited, and directly following her undergrad she landed a job as a contact sheet printer at LTI photo lab, a place where “the top photographers in New York and the country brought their work to be processed and printed.”

Years later, Jade is a highly successful and prolific artist. Her photos are drawn together by their architectural focus and eerily beautiful intrigue, but she is best known for her series Lost Utopias, a years-long project that she lovingly refers to as her life’s work. Lost Utopias is a collection of photographs, but it is also in some ways a mission—Jade’s ongoing quest to document every world’s fair site across the globe.

World’s fairs were a phenomenon that first became widely popular around the mid 19th century, as nations began rapidly industrializing. Cities would host world’s fairs as a means of cultural exchange, and as platforms for exhibiting new and exciting forms of art and technology. However, decades later, the buildings and architectural wonders created for these events have largely drifted into abandonment and obsolescence. While the world may have forgotten about these landmarks, Doskow has just begun the process of rediscovering them.

The inspirational seeds for Lost Utopias were planted before Doskow even set foot on her first world’s fair site. After moving to Red Hook, Brooklyn in 2002, she found herself in a neighborhood that was “mostly abandoned and kind of felt like the Wild West.” As a photographer focused primarily on architecture, she began to document “unused buildings [and] repurposed buildings.” Although the scene is, in Jade’s words, “very different now”, its old aesthetic had a lasting effect on her. It primed her to begin thinking about the world around her in new ways, to meditate on “what happens after the initial purpose of [a] building has passed.”

She had these concepts churning in her mind when she took a family vacation to the beautiful and iconic Spanish city of Seville. Jade had been traveling on a typical double-decker bus when the vehicle took a surprising turn “from the old part of Seville across this really brilliant, futuristic looking bridge by [Spanish architect] Santiago Calatrava, to the 1992 World Fair site.” Like many New Yorkers, the young photographer had only “experienced world’s fair structures peripherally, because the Flushing Meadows site [home to the 1964 World Fair] is something you just see on the high way when you’re driving in and out of the city, or to the airport.” It was never something that had been in her realm of every day life. 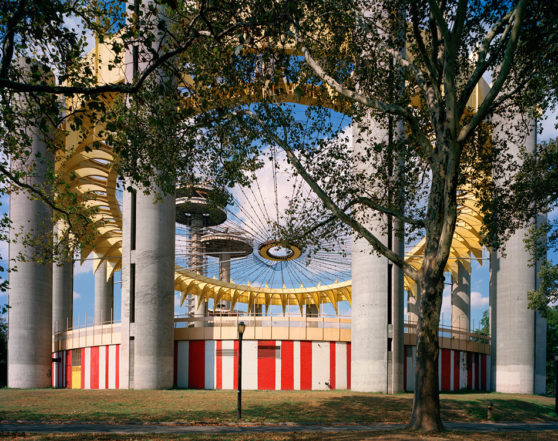 However when she arrived at the Seville site—an area she supposes must have spanned at least 1000 acres—she says her imagination was captured. Her descriptions of the location are evocatively poetic in themselves, as she reminisces over the sight of “weeds growing everywhere” and “an empty fountain with algae and beer cans.” She says that despite the decay, “it was clear that the city was really, really proud of this place.” Another factor that Jade says may have added to her intrigue with the dilapidated locale was her fascination with time travel. In fact, she muses, “I always think of the world’s fair project as a sort of time travel.” When she came back to the states, she began to research the fair sites in earnest, “never envisioning” that Lost Utopias would become “kind of [her] life’s work.” 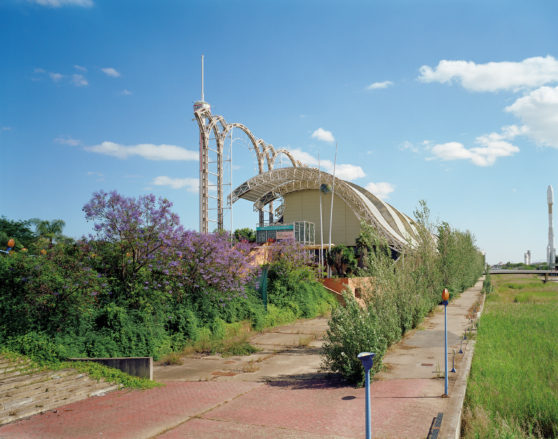 Doskow began shooting around 2007, and by this point she has had the opportunity to visit a plethora of these diverse sites across the country and the world. However, when I ask her to recommend a structure truly worth visiting in person, she doesn’t hesitate as she jumps in to say “Montreal, especially, is full of these really futuristic structures, like [Israeli/Canadian architect] Moshe Safdie’s Habitat 67, which is…the only fair structure that is private residential housing, and its made of these blocks of concrete so it feels very brutalistic but also very futuristic at the same time, and it’s aged in this really unpredictable way, which is part of what this is about as well.” 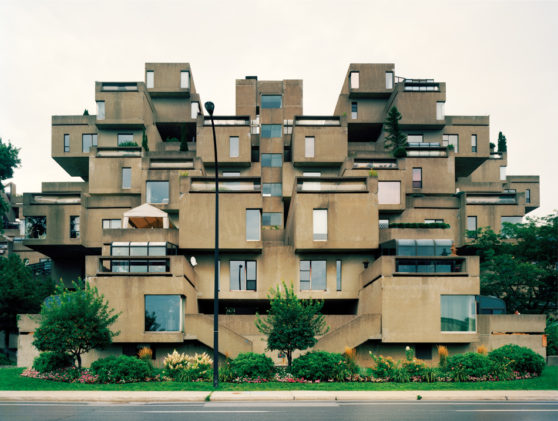 Another site she says is “wonderful to experience in person” is the Buckminster Fuller geodesic dome, constructed for the 1967 World Expo. She describes the structure as “looming and ethereal.” According to Jade, it “punctuates the landscape in this mesmerizing way.” Her photograph of the Buckminster Fuller happens to be, by the photographer’s own estimation, the most well known piece in the series. However the site also gave her the most trouble in terms of imaging work.

“When I arrive at a site, I never know what the weather’s going to be,” she explains…I can plan as much as I can plan, but many times it’s overcast or cloudy and I have to figure out how to work with that.” In the case of Montreal, she continues, “we were shooting at sunrise and it was a bit overcast, so it was this real challenge. The little house in the foreground had these metallic solar rooftop panels, and because the Buckminster Fuller structure itself is comprised of metallic pieces, everything was reflective.” She describes how the light bouncing around at sunrise made the color work “really tricky.” Ultimately, the editing process for this particular piece took Jade upwards of a year to complete. She tells me that she “[doesn’t] rush anything”, going on to say that “just as choosing which image out of your photographs is the one to go with” takes patience, she also “[spends] a very long time just sitting with the color work, sitting with the contrast, just to capture that sort of vital essence of the environment, while making it a really exciting image to experience.” 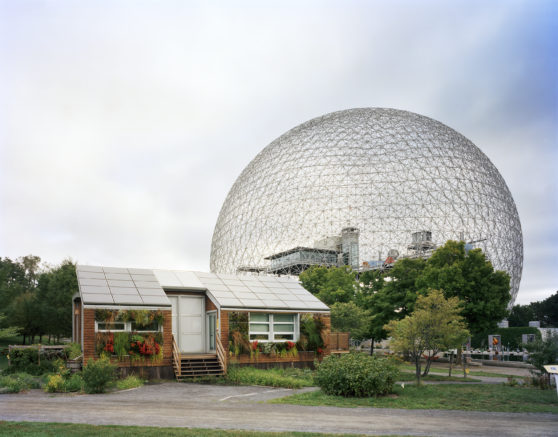 Upon being asked if she had any advice for would-be photographers trying to get their start in the business, she affirms “yes, definitely. Try to find some mentors that can help you along the way. I’ve had really wonderful mentors myself, and just their experience can be invaluable. Spend time at galleries, if you’re going down the art photography route. The important thing is just not to rush it…Put in the hours, put in the time, try to really understand how complex a successful image is, because a really great photograph is not something you rush.”

In the age of Instagram and Snapchat, this piece of wisdom is a timely and important reminder for young photographers. Although she concedes that the undergrads she sometimes teaches, “have a much more sophisticated understanding” of social media than herself, she still has a few tips for Instagrammers: “You don’t want to over promote. I think that’s the trick, not to just drown people with postings because then they’re going to find you really aggravating. You have to think carefully about who you want interested, why you want them interested, and what you can do to pique their interest.”

In terms of future projects in the works, Jade has been collaborating with filmmaker Phillip Shane, who she connected with over Twitter and who “also has a really keen interest for time travel, and science fiction and technology and architecture.” Shane has traveled with Doskow to multiple shoots at locations including Seattle and New York, documenting the background process of her art. Doskow believes that a documentary could compliment her photographs through displaying the “slowness” of shooting with an old-fashioned camera as opposed to digital, and by showcasing the unique experiences inherent in every shoot.

Shane’s film is expected to reach completion sometime in the next couple years. In the meantime, Jade plans to take her Lost Utopias work to Asia to document world fair sites across Japan, South Korea, and China. Whatever else Doskow has in store for us is still confidential, though—until her new projects are off the ground, “I can’t talk about them,” she says.