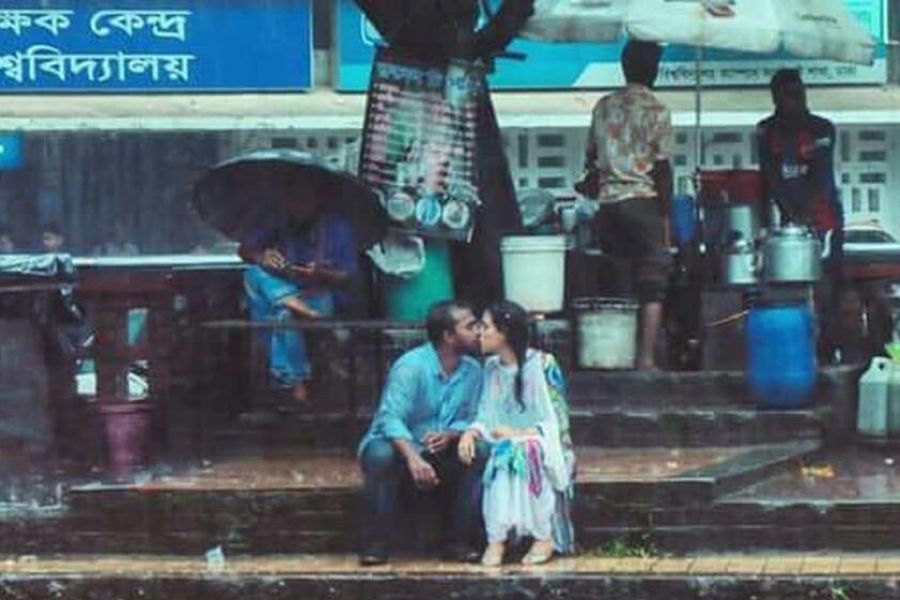 The photograph seems innocent enough—two college students, seated side by side in the midst of a heavy rainstorm, share a quiet kiss. The couple, both adorned in blue cloth that matches the cool-toned atmosphere surrounding them, appear to be oblivious not only to others seated around them, but also to the rain itself. To many viewers, the snapshot is the picture of romance and a sweet ode to young love. And many audiences within Bangladesh, where the picture was taken, did react positively to the picture.

Protests and unrest have been unraveling on the University of Dhaka’s campus for months, and the snapshot of the young couple appeared to be a much needed moment of peace and affection. However, some more conservative viewers took great issue with the subject matter. One blogger used the image as an excuse to comment on what he perceives to be the denigration of Bangladeshi society, writing,

“Lovers are getting more audacious by the day. Earlier these things were done in secret. Now they are doing it in broad daylight. The day is not far when they will be making love in public.”

Others agreed with his staunchly negative position—including other photographers and potentially the artist’s own boss. Photojournalist Jibon Ahmed, who says the subjects consented readily to having their image taken, was responsible for the controversial photograph. Ahmed reports that fellow photographers “roughed him up” in the days following his photograph’s posting on social media, and that his superiors asked him to turn in his ID and laptop without explanation.

However Ahmed, and many others, will not succumb to the naysayers for the time being. The photographer says,

“No, you cannot portray this photo negatively, because I found it a symbol of pure love. The couple had a spontaneous lip kiss; I found nothing wrong in them or no obscenity. Of course I am disheartened. Some people in our country became educated only in papers, but they are not educated in a real sense. They failed to realize the underlying meaning of my photograph. I am also a bit worried about myself.”

While many took issue with the picture, it garnered heavy praise in other corners—as evidenced by the fact that the post accumulated an impressive 5,000 shares within the first hour of it being posted to Ahmed’s Facebook.