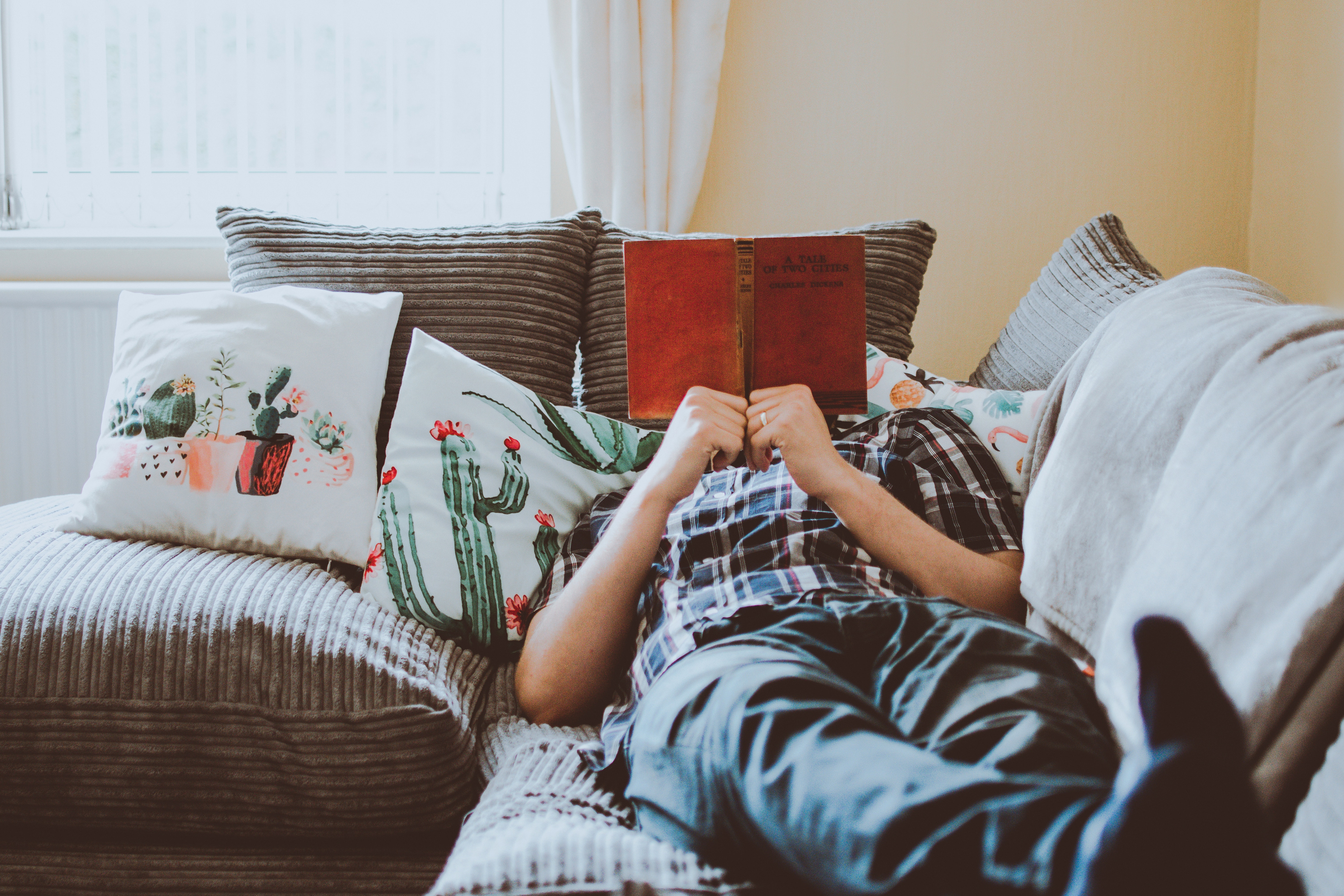 With the new year already here, many of us are probably all struggling to keep up with our freshly-made New Year resolutions. Maybe, start one of them here and read a new perspective.

Whether it be fiction, nonfiction, or philosophy, here are some curated books we find inspirational here at Resource.

1. My Year of Rest and Relaxation by Ottessa Moshfegh

We’re starting with a shocking, vulnerably hilarious novel about a young New York woman going through a drug-assisted hibernation. She has everything and yet she is missing something. There is a void at the center of her life even though she’s surrounded by images of everything she wants and already has through inheritance and privlege. Ottessa Moshfegh wrote Homesick for Another World, amongst many others.

This book is a work of fiction, but also tying in issues of mental health and coming-of-age in New York City. It also hangs on the fringe of 9/11. This novel handles contemporary issues that are both still talked about now, and explored deeply through the protagonist of the novel.

2. Against Everything by Mark Greif

A combination of comedy, rambling, and pure seriousness. Mark Grief’s literary criticism shows its alright to have an opinion, especially in the late 2010’s. His tone is enticing and intelligent, often compelling his readers to go on reading tangents along with his own.

With 2019 challenging us mentally and politically, Grief gives us a lot to look at and think about, whether it be the process of gyms or music. His skeptical approach is not of disillusionment, but something of a device to further understand the concepts he’s working with.

This is a great read to exercise your own everyday skepticism, whether via walking to the gym or listening to your favorite Radiohead song.

3. The Wisdom of Insecurity by Alan Watts

Alan Watts is an Eastern Philosopher aimed at a Western audience. He breaks down intense Eastern principles and criticisms for an audience that may not understand from their POV.

From the introduction, “we live in an age of unprecedented anxiety.” Watts communicates a message here on our willingness to forget about the here and now. Not in an ignorant way, but in an introspective way, that we need to rethink about what it means to lead a fulfilling life and how that could possibly be achieved through knowledge.

Watts is a firm believer in the now, and like Mark Grief, is not afraid of criticizing what he holds most close to him. This is a great read if you’re looking for a hard perspective change!

4. The Lonely City: Adventures in the Art of Being Alone by Olivia Laing

Olivia Laing asks the questions every person who ever lived next to a bustling city or town asks, “What does it mean to be lonely?” Of course, some of us may never experience this as we’re constantly surrounded by people and confidence. However, there is a large amount of city dwellers who feel this phenomenon.

Laing asks, “How do we live, if we’re not intimately engaged with another human being?” and “Does technology draw us closer together or trap us behind screens?”

Living in the city herself, Laing relates her own experience with loneliness in an artful, deeply introspective book. This read is great when experiencing loneliness, or rethinking your place in the city in general.

Like the color blue? Maggie Nelson wrote a whole lyrical vision based on the color blue. Full of lyric and philosophy, Nelson paints each page with an exploration of personal suffering and love.

Maggie Nelson is widely renowned for her poetry and nonfiction and teaches right now at the California Institute of the Arts. If you haven’t read Maggie Nelson yet, we recommend you start soon. This book is great to change moods and atmospheres quick.

6. The Subtle Art of Not Giving a F*ck by Mark Manson

This book is for all our caring angels out there. It is based on Mark Manson’s influential blog and is focused on how to care less about things. Not in an ignorant sense, but in a fully intentional sense. Manson relates how a few rules can help you, the reader, to lead a less stressful life. His logline is, of course, “Do what you want, not all you can.”

This read is great for a casual, coffee-time flip through or a one-day finish.

2019 is going to be a time for expanding boundaries. A great way to practice that is reading about experiences drastically different from your own. Here’s a novel based on Tsukiko, a young girl who happens to meet one of her old high school teachers by chance at a sake bar.

The book itself reads like sparse, quiet Japanese art, like side-by-side woodblock prints and screens. A great addition to Japanese Literature, its considered a contemporary romance, but also not really at all. If anybody watched Lost In Translation, many readers consider the two similar in atmosphere.

This read is great for feeling spread out and broad. Let yourself sway in Kawakami’s atmosphere.

From the Sunday Herald Times in London, The Woman Destroyed contains “immensely intelligent stories about the decay of passion.” Three different stories on three different women. Each woman faces age and unexpected becomings.

Simone de Beauvoir did a remarkable bunch for women in philosophy, and its no wonder her fiction writing can give us so much insight into the romance of womanhood. This read is great for those who want to pick and read a 19th-century feminist philosopher’s mind during the rise of Existentalism and French philosophy.

This almost seems like a given. From a long distance, this is about a woman who defied expectation, an exploration of soul and content. Its wise, its inspiring.

Michelle Obama has become one of the most iconic women of our time. She’s the first African-American First Lady of the United States of America amongst many other accomplishments. She fought to create a more welcoming and inclusive White House, and established herself as a highly influential advocate and ally for all women and girls around the world.

This is her memoir, a piece focusing on her history and her reflecting her actions. She tells her readers about her highs and her lows, however private, and tells her story on her own terms. This novel is great for those who need to read something truly inspirational and exceptionally relevant.

Another highly inspirational woman, Patti Smith is a New York City queen. M Train and Just Kids became a rite of passage for many New York City youth. Her storytelling has changed many lives and compelled many more.

In Devotion, Patti Smith dives into her artistic and creative process. How is it that she’s so genius? She gives her readers a peek into her own thoughts and her process towards creating her art and words. She writes about her travels, her experiences, all what she does best.

This is great for people who need a creative boost from one of the most influential women in the artistic world.

11. If Beale Street Could Talk by James Baldwin

Some of you probably saw Annapurna release a trailer with the same title. Yes, its originally a story by the beloved James Baldwin. James Baldwin is witty and quick black rights activist and writer that lived and worked alongside with people like MLK and Malcolm X.

Featured on countless interviews and news pieces, Baldwin often tackles the growing intersections of being black in America, and what that could mean for everybody else. His literary style could be described as a spiral going outwards, focusing in and then expanding out in intentional strokes for his readers to hang onto.

This book is great for those looking for a relevant and lively story on a moving America through the eyes of Tish. Tish is a nineteen-year-old girl who witnesses the father of her child falsely accused of a terrible crime and imprisoned. Baldwin writes a compelling love story evoking the blues. Their story and experience is unshakable from the American consciousness.

12. The Idiot by Elif Batuman

The log-line on Goodreads says “A portrait of the artist as a young woman. A novel about not just discovering but inventing oneself.” This contemporary fiction novel is set in 1995.

The narrative follows Selin, the daughter of Turkish immigrants, as she arrives for her first year at Harvard. Selin’s life follows a coming-of-age and a peek into the life of expectation and coming to grips with oneself.

This book is great for those looking for a read to check themselves as they check the characters.

13. Sapiens: A Brief History of Humankind by Yuval Noah Harari

Here’s some nonfiction for you. Any intro 101’s are beneficial to read, its always great to grow your foundation once in awhile. When was the last time you learned about your biological roots? Unless you’re a scientist, it’s probably been awhile.

This book tackles questions like “How did our species succeed in the battle for dominance?” and “Why did our foraging ancestors come together to create cities and kingdoms?” to “How did we come to believe in gods, nations and human rights; to trust money, books laws; and to be enslaved by bureaucracy, timetables, and consumerism?”

Dr. Yuval Noah Harari draws insights from biology, anthroplogy, paleontology and economics, exploring how pieces of history have shaped our societies, our environment and our own psyches. This book is great for those who need evidence to change and inspiration rather than just fictional experiential shifts of consciousness. To each their own.