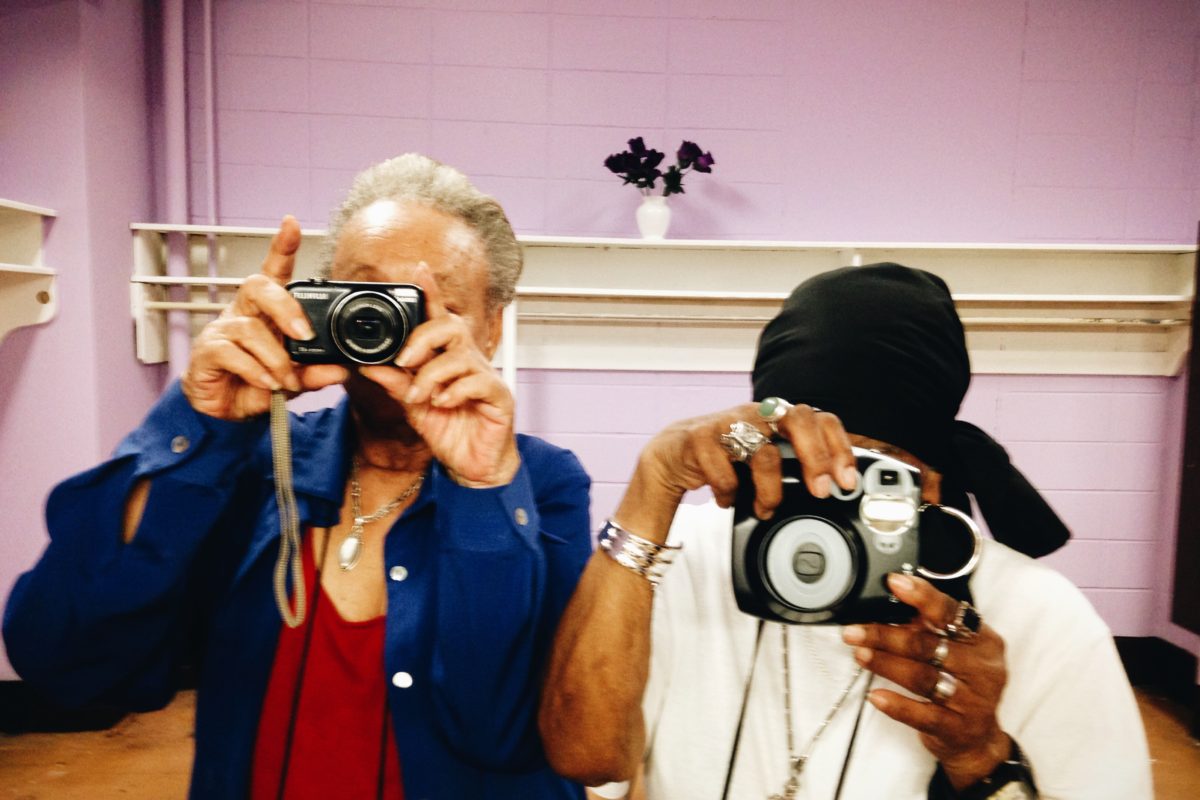 This Photographer Helps Others Find Therapy with the Art of Photography

Nina Robinson’s phototherapy program harnesses photography’s innate ability to bring about healing and inspiration both for her and her elderly students.

As a documentary photographer, Minneapolis-based Nina Robinson draws inspiration from both the people she has interviewed and fellow photographers whose works explore transformation, family, social issues, and solution-focused journalism. But as an educator, she didn’t realize how the Phototherapy program she helped develop would also cultivate a passion for teaching senior citizens.

Editor’s Note: Visual Momentum refers to the flow of storytelling and its effect on the viewer’s thinking process. This series highlights creators who are successfully using their tools and minds to create an impact on the world through imagery with the intent of inciting action. With the support of Fujifilm, we share their stories. Be sure to also check out the video interview on This Week in Photo

It all started as a two-year program she nurtured and developed independently with the Bronx Lebanon Hospital Department of Family Medicine in 2015. From a beginner’s photography class for senior citizens at the William Hodson Senior Center in the Bronx, Nina’s work organically evolved into a phototherapy course after she decided its structure and impact needed reevaluation. This change came about after several exercises and projects that revealed it was leaning toward a more profoundly personal route. “As the instructor, my goal was to get my students, the elderly population, motivated, engaged and talking about the topics that mattered to them to keep their minds stimulated,” explains Nina to the Phoblographer in an interview. “It was about understanding the human connection and creating a comfortable environment for the seniors to speak openly and honestly, instead of internalizing issues.”

Photographers are no strangers to using the medium to evoke emotions, incite ideas, and tell personal stories. “The depth of some of the discussions about shared photos often evoked concealed emotions and thoughts about self-discovery, experience and social views as a whole for many of the students as well as for me,” noted Nina. She also understood that this program had the potential to add another dimension. Built on the perspectives of senior citizens, it could be a thought-provoking avenue to surface their unique stories waiting to be told.

Unpacking Memories with or Without the Lens

“I felt very drawn to images photographed by my student Sarah Carter, who had a digital point and shoot camera that she would take with her everywhere. From her bus rides through the city, to other events she would attend and the body of work she would bring me to review was amazing. Barry Hardy, he used to be a truck driver and through discussion he revealed how much he missed driving so he chose to incorporate photo taken with his SLR camera by snapping photos out the window while he was driving. He got some incredible shots from that.”

After the icebreakers that are typical of every class, Nina asked her students to bring in family photographs. Those who didn’t have photographs brought in family heirlooms or items of personal significance. Building a discussion about these photos and items forged the bond of the class and helped them identify on a personal level. The phototherapy program eventually became the perfect avenue for her elderly students to confront and explore various personal themes — the most common being memory, family, politics, and race. Some of them had cameras — from digital point and shoots to SLR digital cameras, and even a Polaroid Land Camera — to unpack all these issues and channel them into compelling, straightforward photographs. Others were content to attend the classes just for the discussions about photography, or engage in the discussions about the photos brought in to the sessions.

Two of these students made an impression on Nina — her interactions prompted the realization that she would build emotional, inspirational bonds with them. Their photos provided a glimpse into their daily life and even the seemingly trivial things they missed from an earlier point in life. Despite all its benefits, phototherapy also came with its own set of challenges both for Nina and the participants. She found it mainly revolved around processing many of the responses to the images she was showing during the sessions. These would also often spiral off into discussions about their personal experiences, beliefs, emotions, and memories — topics that she noted had been suppressed for many years but resurfaced with the combination of pain and liberation.

Creative avenues and expressive art activities like photography have always been encouraged for the elderly to enrich their lives and bring about a myriad of benefits to senior health. Among these, according to Barbara Bagan, PhD, ATR-BC in Geriatric Monthly, include reducing depression and anxiety, assisting in socialization, fostering a stronger sense of identity, and offering sensory cognition. These advantages play a notably prominent role in the program Nina developed.

“Our elderly population is often ignored in our society and we need to understand the importance of giving them a platform like this because they still have a lot to say and a lot they can do. Engaging in phototherapy amplifies their voices. It creates a space for them to speak, share, feel empowered and meet new people they may not have met otherwise.”

It’s no surprise that photography can be a very powerful tool for healing and drawing inspiration, and the Phototherapy program showed how it often goes both ways. For the senior students, a single image could trigger a discussion and tap into emotions they’ve never felt, or haven’t in a long time. Sharing their personal stories helps build their confidence and individuality, encouraged by a safe space built on respect and empowerment. Nina stressed that among the important lessons for her as an educator is to understand that teachers are also students, and each session is a collaborative effort. This perspective shifted her photographic process from simply telling a story about communities to involving communities in the conversation.

Nina continues to teach visual and social workshops like the Phototherapy program across the US. While that particular program concluded with her move to Arkansas, it served as her inspiration for the multi-generational photo workshop and youth photo boot camp she facilitated in the state. “I am happy to know that organizations like the Bronx Documentary Center was inspired by my work and developed a photography class supporting the elderly population in the Bronx.” she stated. “My hope is to partner with hospitals and clinics to provide these photo/social workshops to communities across the US who wouldn’t normally have access to a program like this.”

The Creative Process for the Documentary Photographer

A Fujifilm user for the last five years, Nina’s go-to camera is the Fujifilm X-Pro2 for its compact size and electronic shutter mode. “It fits perfectly in my hands and reminds me of my very first camera, the Minolta X 700. What I love most about my X-Pro2 is the electronic shutter mode, which has helped me tremendously as I capture stills on film sets, intimate moments with families, and at the William Hodson Senior Center where I used to teach. I used XF 16-55 mm f2.8 and the XF 35mm f1.4 lenses to capture the portraits of my students and other senior citizens that considered the senior center a second home.”

It’s interesting to note the impact of the Phototherapy program on Nina herself, both as the facilitator of the classes and a documentary photographer faced with the opportunity to draw inspiration from her students’ stories. However, her primary goal as an educator takes precedence, and it’s where she mostly devoted her creative energies. When she did manage to take photos around the senior center, she was able to channel what she learned from her students in terms of visual storytelling.

A portrait of Thelma, a PhotoTherapy student at the William Hodson Senior Center and one of her photographs.

A portrait of Sarah, a PhotoTherapy student at the William Hodson Senior Center and one of her photographs.

A portrait of Mr. Brown, a PhotoTherapy student at the William Hodson Senior Center and one of his photographs.

A portrait of Berry, a PhotoTherapy student at the William Hodson Senior Center and one of his photographs.

“I wasn’t too focused on documenting what I was doing as the purpose of my class was getting my students to talk and interact with each other, getting them excited about image-making or discussing a topic around a photograph— understanding what they see in the image and also how the image makes them feel. Since I was the facilitator, it was quite difficult to document unless we had a speaker, on a field trip or when my students split up in pairs to photograph each other or photograph the neighborhood. I’d often come in early or stay late and photograph around the senior center.”

“This was hands down one of the most rewarding experiences in my photo career I’ve ever had (without picking up my camera). Truly miss my students. I don’t think they know how much they’ve changed my life and what I learned from them. How I view visual storytelling now has a lot to do with what we collectively shared in class.”

Nina’s documentary photography covers stories in the American South, Midwest, and the East Coast. She describes her work as a mixture of her past experiences, with the goal of bridging documentary, personal elements, and fine art. Her visual storytelling style, she said, has been present since she first picked up the camera. It was developing the confidence to pursue what she thought was interesting instead of being told what was acceptable that she had to learn over time.

As a creative, she allows her own artful approach to come out naturally. “I think of the quote by Edward Alby: ‘If you intellectualize and examine the creative process too carefully it will evaporate and vanish.’ My gifts are embedded within me and don’t want to dull or disconnect from my work by thinking too hard about adding them to my work.”

Nina’s current focus falls strongly on underrepresented communities to break the visual prejudices of race, class, age, and gender. The strength of documentary photography, for her, lies in both having a good eye and an understanding and respect for the people in front of the lens. Her photos have appeared in American Photo, TIME Lightbox, Lens Culture, New York Times Lens Blog, and Wall Street Journal. Apart from exhibits, she was one of the three photographers awarded with the Getty Instagram Grant in 2017, and a recipient of a reporting grant from the Pulitzer Center on Crisis Reporting.

As a visual storyteller, she seeks to reveal the beauty of truth and honesty at its core. For her personal projects, she ensures that each one feels personal and uniquely her by reshaping how she communicates visually, and to whom. ” In this industry, we talk a lot about influencing change with our images, but what does that even mean? By asking that question I became more interested in the non-traditional photographer, the communities I photograph and how individuals see themselves in modern-day photography.”

Editor’s Note: This is a sponsored blog post from Fujifilm

FUJIFILM North America Corporation (Fujifilm) is empowering photographers and filmmakers everywhere to build their legacies through sharing their stories. Grounded in its 85-year history of manufacturing photographic and cinema film, pioneering technologies in lenses and coatings, and driving innovation in developing mirrorless digital camera technologies, Fujifilm continues to be at the center of every storyteller’s creative vision.

With a Fujifilm digital camera at your fingertips, you can seize the moment, share your story and build your legacy. Learn more on our website.

This article first appeared and was provided by our friends at The Phoblographer.