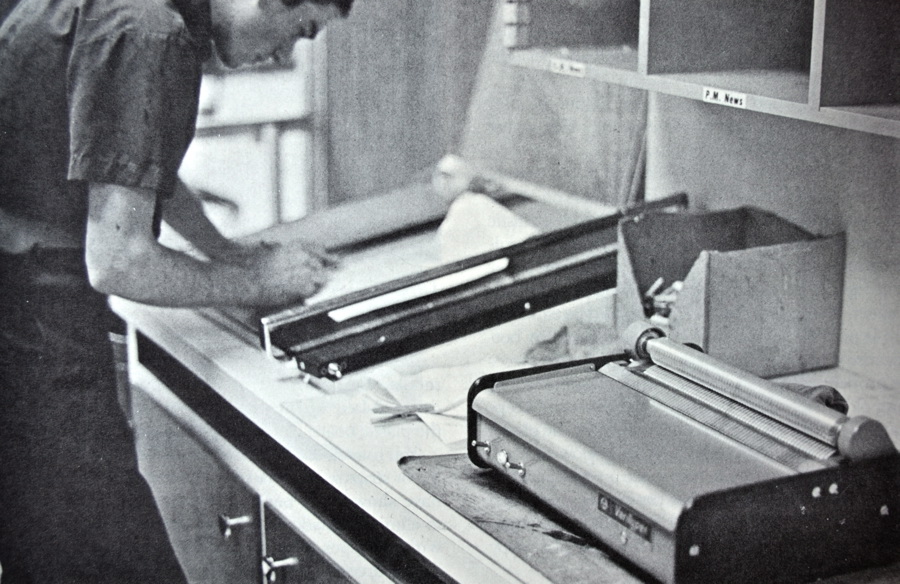 Today’s creative have immense technological advantages with software capable of taking images and text, turning them into everything from magazine pages to animated video. To appreciate these technologies and skills, it makes sense to take a trip back in time to the 1990s, where desktop publishing software, graphic design, and new media was in its infancy.

The dawn of the digital age…

In the early 1990s, most magazines, newspapers and creative design firms used a combination of computer design systems and old-fashioned hand craftsmanship.  The notion of “hand crafted” which is so much the marketing buzzword was the general rule of thumb back then.  Lithography (offset printing has always had a “hand craft” element to it until late 1980s and early 1990s, when automated plate developing machines took much of the hazardous chemical exposure by encapsulating the process to these machines. When digital offset plates – predominantly vinyl plates run through laser printers and copiers – came into vogue in the 1990s, the world of hand-crafted printing entered a new era, and many short-run printers and home-office creatives took advantage of this technology.

Two decades ago, Editors had two primary jobs – approve content, and drive writers, photographers and contributors to come up with content which would sell and satisfy their Publishers, who ran the overall business.  When content wasn’t selling, Publishers made moves, much the same way professional sports owners fire General Managers and Coaches who don’t win.  Very little has changed with Publishers, but Editors have taken on far more responsibility, even having to work as foot soldiers when there was a time they could enjoy being behind a desk.  Some Editors relish being “on the ground floor” while others would rather go back to being behind the desk.  These decision makers also had the final say on who could use the darkrooms to develop photographs. In a time sensitive deadline driven environment, this power was difference between career advancement and looking for a new job.

One significant difference – content mills and hungry artists and writers are more prevalent than ever, and Hollywood presents these folks as the trendy “starving artists,” when the reality is that many work day jobs, work part time for very little, and find themselves competing against countless others willing to work for next-to and something actually nothing.  Gatekeepers, typically administrative and editorial assistants, take great pleasure in being the judges, juries, and executioners of what they perceive to be pay-worthy material.

A bad paste-up resulted in a lot of man hours lost to editing, correction, re-typing and paper use.  It was not uncommon for a paste-up artist to be fired on the first day for making catastrophic blunders.

Today’s budding creatives see “cut” and “paste” as shortcuts in their programs, but these commands found their roots in the slow, tedious, and meticulous world of Paste-Up, the dirty side of graphic design and printing.  In the mid 1990s, a significant number of shops and professionals still did things the old fashioned way.  Many small publications, magazines and firms were using drafting tables, dummy sheets, and light boards to precisely align text, art and line tape to create copy for reproduction.  Sticky pasting wax, razor-sharp pen knives and markup pencils were the old-school tools. It was not uncommon for employees and creatives to end the night wearing band-aids due to being sliced and burned by equipment. Paste-up was, indeed, a dirty job and bloody profession.

Terms such as “chroma blue” (a color which was so light it could not be reproduced by plate cameras and early scanners), “4-up” (putting four images onto a single dummy sheet to maximize usable space on a sheet and reduce paper costs), “emulsion” (the light-sensitive chemical coatings on plates and film, of which silver was an essential ingredient, along with other toxic chemicals) and “fixer” (a compound used in both the photographic and printing world which stopped the developing chemicals from reacting with the aforementioned emulsion) were what all graphic designers, photographers and other creative had drilled into them in class, and learned the importance of how they were used.  A bad paste-up resulted in a lot of man hours lost to editing, correction, re-typing and paper use.  It was not uncommon for a paste-up artist to be fired on the first day for making catastrophic blunders.  Today’s paste-up consists almost exclusively of artists and professionals using computer terminals, tablets and even smartphones to design layouts and upload them to servers for both web browsing and printing.

This is the most stark change to the creative world has been in the realm of production and the output media used.  Gone are the days when print was king; most magazines and other periodicals have seen their print sales drop by over half in the last decade, while online views have jumped by leaps and bounds.  It wasn’t uncommon for stores to order thousands of copies of periodicals with amazing images for sale.  Events such as the Moon Landing, the Challenger Disaster, and the September 11th attacks generated imagery and print media which evoke emotion to this day.

As digital media advanced and the internet took a tighter grip, the gritty, dirty and often dangerous world of printing presses, packaging and distribution has been downsized, operations often outsourced of consolidated, and many startups transitioning from print products to online media.  One of the most astonishing examples of this was Newsweek, which went from being a print media standard bearer to an exclusively online publication several years ago.  Other magazines have reduced their print quantity as paper and ink prices skyrocket.  Social media would further transform the business, with “on demand” media now the standard as opposed to a novelty.  The upside to this was the advent of direct ink printing presses, which eliminated the need for plates and allowed for small-run publications, such as student newspapers, to produce limited copies of their product and become more environmentally friendly thanks to such advances as 100% recycled rag and soy-based inks.

Perhaps nowhere has seen such a transformation in the creative world as metrics used to measure performance.  In the 1990s, success was measured in three general areas:  impressions, rights fees and copies.  The last two were easy to track thanks to standards and actual monies, while the initial was more abstract and based on statistical analysis.  Impressions, the number of times an image of any sort is seen, was the easiest to transition into the world of new media as it didn’t change much.  The metrics of CPM were based in impression in that, the more views your content received, the more likely advertisers who associated themselves with it would be patronized.  “Clickbait,” or misleading headlines used to attract readers and sales, could find their roots in sensationalist headlines of the supermarket tabloids, many of which have fallen by the wayside (Weekly World News, The Sun, etc.)

Giant volumes of clickbait with subpar content will always be eclipsed in the long run by solid writers, top-notch photographers, and designers who are able to create engaging, eye-catching layouts.

Where sensationalism sold copies, clickbait drove views and thus, advertising revenue based on CPM metrics.  Finally, rights fees have increasingly become a small stream of revenue as video and content piracy is rampant across the internet.  With the exception of celebrity contributions or content protected by corporate lawyers, it is the rare content which actually commands a high price.  Most rights fees are now charged by creative who sell the reproduction and re-use rights back to the very clients they worked with in the first place.

Media standardization has become a new normal.  Years ago, a magazine, newspaper, or TV station was defined by its look.  The New York Times (aka ‘The Gray Old Lady’) was the pinnacle of handcrafted newspapers; a creative would be hard pressed to find a mislaid line or misaligned paragraph, while USA Today was considered “processed,” that moniker owed to its colorful yet boxy, preformatted design.  Time Magazine was famous for crystal clear photography, and Newsweek for compelling, engaging layouts.  Conde Nast Traveler was reknowned for its brilliant scenes, calling readers to exotic destinations.  CNN was the cheap cable network with gritty content, The Weather Channel was famous for whiz-bang graphics, and local TV stations could never compete with the news presentations of New York, Chicago, DC, and LA.

Today’s media has become far more centralized, with largely uniform content and packaging,  TV stations in both large markets and small towns look largely the same thanks to advances in digital graphics management. Many newspapers and magazines have streamlined operations, and now have adopted a unified branding strategy to increase recognition and production efficiency.  It is, however, not all negative, as this standardization has created a new market for niche publications and sites catering to viewers and readers who long for days of uniqueness in media.

There is an old saying; the more things change, the more they stay the same.  As time goes on, and as media changes rapidly, many things remain the same.  The need for quality content, skilled designers, and capable marketers are more important than ever.  Giant volumes of clickbait with subpar content will always be eclipsed in the long run by solid writers, top-notch photographers, and designers who are able to create engaging, eye-catching layouts.   Still, we have come such a long way from the days of sticky wax for paste-up, toxic developing chemicals, and dangerous machine presses, it’s difficult to imagine a time when such things as acid-free paper, paywalls, and soy ink weren’t part of our lexicon.  It is a new day in so many ways, but we owe so much to those who blazed these trails.