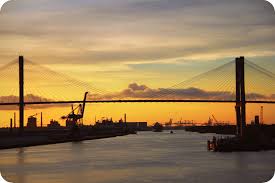 If there’s one thing that the Southeast United States is famous for, it’s the sunsets.  Perhaps only the Pacific Coast has more spectacular dusk views, and photographers looking for that magic moment would be hard pressed to find a region more chock full of amazing places to capture a dazzling image.  Still, there are some locations which offer some astoundingly beautiful opportunities for sunset shots which transform a click of the shutter to true art.  Here are ten locations to seriously consider:

Nestled in the extreme western foothills of the Appalachians, The Steel City of the South has some of the most stunning mountaintop views for sunsets.  Vulcan Park in the southern downtown area, and the Trussville area near the city’s airport offer some amazing picture opportunities.  Golden hour photography is especially brilliant in the fall, when Alabama’s breathtaking foliage begins to set in.

This state park has crystal clear views at its summit where one can capture images above the clouds while overlooking northwest Georgia farmland.  At sunset, this particular park combines the best of the mountains with the best of the skies, creating a genuine “heaven on earth” experience.  Admission to this park can be purchased online at the Georgia State Parks website, with both campsites and cabins available for those creatives who wish to rough it.

Anyone who has watched films and television series set in Miami in the last decade will understand how South Florida’s largest city provides a dazzling sunset silhouette.  At just the right time, photographers can, from a position on West Avenue facing Biscayne Bay along Miami Beach, capture a magic imagine of the sun sinking into the skyline or along South Beach, one of Hollywood’s most iconic settings.

Savannah’s historic buildings have a way of reflecting sunset light which can only be described as elegant.  This city, once the colonial capital, offers a variety of amazing sunset views, one of the most beautiful being of sunset behind the Eugene Talmadge Bridge, which links the city to South Carolina. Other opportunities include sunsets along waterways, the downtown area along River Street from the South Carolina side of the Savannah River, and various farms and fields surrounding the city.

Music City isn’t usually associated with sunset photography, but its unique skyline offers the opportunity for photographers to capture some stunning images.  One of the cities most iconic buildings, AT&T Plaza (or as locals refer to it, the “Batman Building”), offers some dazzling scenes for creatives to capture.

No southern sunset list is complete or credible without a nod to the Great Smoky Mountains.  Gatlinburg is on the western end of this area, and, despite its touristy feel, does offer some spectacular views at dusk.  While Johnson City to the East, and Chattanooga to the west, have high views, Gatlinburg has two substantial things going for it – stunning foliage to paint the ground, and a remarkable lack of light pollution.

The Big Easy has some serious voodoo going on to give it some of the south’s most amazing sunsets. Dusk light gives this legendary city additional magic, which is only enhances the Crescent City’s reputation as a photography mecca. Silhouette shots featuring the Superdome are all the rage, but digging into the cities history will offer amazing yet somber reminders of how far this city has come after the devastation wrought by Hurricane Katrina.

Consistently rating among the best beaches in the world, this island in the Tampa Bay area is an authentic world-class destination for photographers.  Sunlight dancing on gulf waves, combined with silhouettes of boats and the occasional tourist in beachwear provide amazing shots for those looking for magazine-quality pictures.  It is also considered one of Florida’s most iconic sunset locations.

Georgia’s state capitol has immense sunset opportunities, ranging from the top of the Westin Peachtree Hotel (an actual rotating rooftop restaurant), to the east from Stone Mountain, where photographers can often get spectacular silhouette shots of the city.  Within the city, reflective pictures can be taken a variety of locations, ranging from Atlantic Station on the north end, to Georgia Tech at Midtown, to Centennial Olympic Park near the iconic Five Points District.  And don’t forget to take a shot of the lighted red “V” from the landmark Varsity Drive-In, located just off I-75/85 at North Avenue.

The “other half” of the Tampa Bay area, St. Petersburg’s Sunshine Skyway Bridge is the true photographic jewel of Florida.  Considered the state’s signature bridge, “the Skyway” as it’s referred to by locals, offers absolutely magical opportunities at sunset in both silhouette and lighted form.  Top it off with this – the Skyway Fishing Pier, the world’s longest and tallest, extends nearly 2 miles into Tampa Bay’s outer banks, and offers unobstructed sunset photography which rivals even Clearwater Beach.