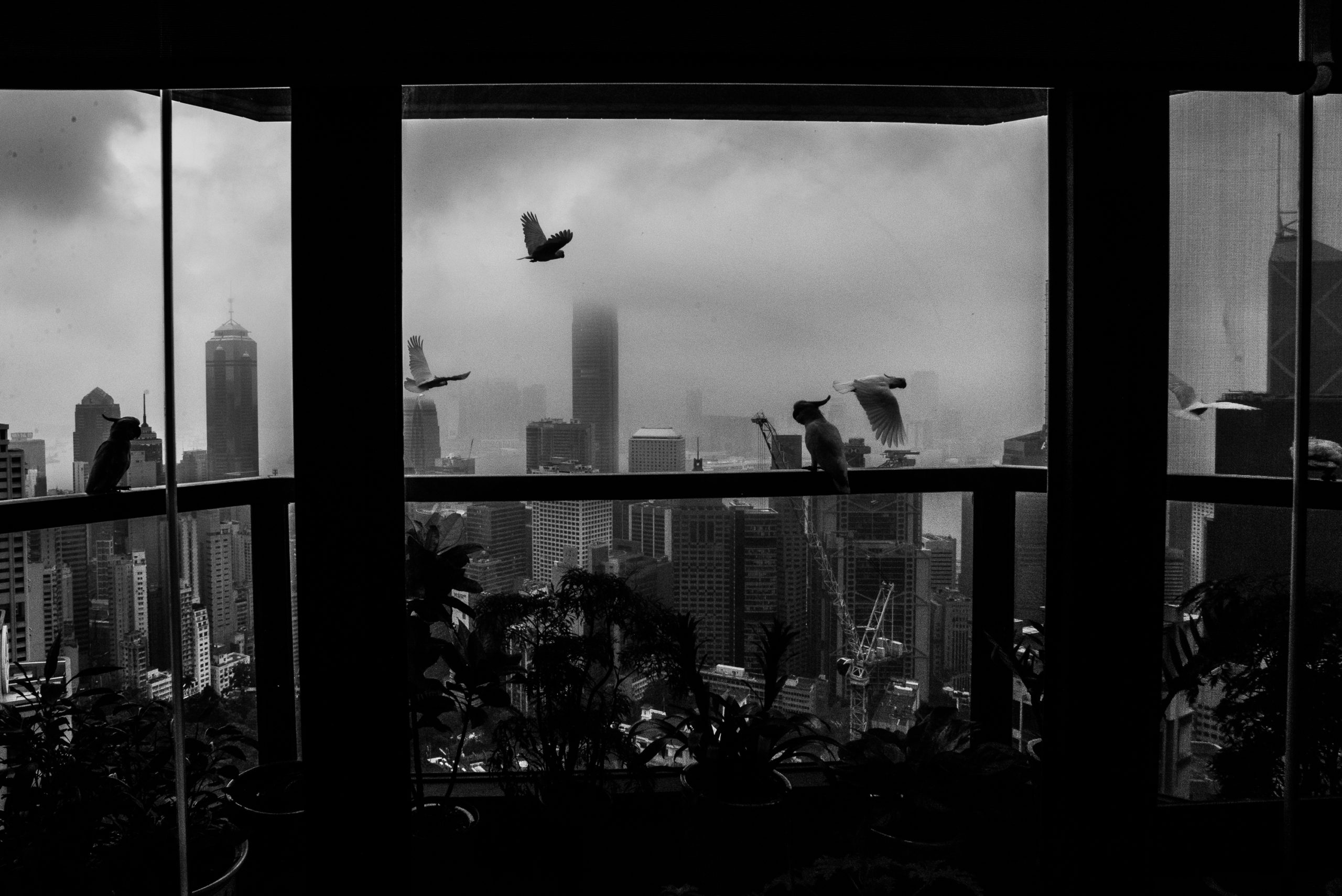 In her compelling book, We Are Like Air, Xyza Cruz Bacani turned to her personal experiences for retelling of the story of migrant workers in Hong Kong.

“If I’m photographing them, it means I have the power,” says Hong Kong-based Filipina author and photographer Xyza Cruz Bacani in an interview with This Week in Photo, referencing her work documenting migrant workers. “But because I’m photographing…my own family, that power was taken away from me.” Hidden against the towering skyscrapers, shopping districts, and the world-famous spots of Hong Kong are lesser-known stories of its migrant worker population. While some light has been shed on their plight, there remains an underreported reality that is both shared and personal to the migrant workers and their families. This is what Xyza has been raising awareness about through her work, particularly through her book We Are Like Air.

Editor’s Note: Visual Momentum refers to the flow of storytelling and its effect on the viewer’s thinking process. This series highlights creators who are successfully using their tools and minds to create an impact on the world through imagery with the intent of inciting action. With the support of Fujifilm, we share their stories. Be sure to also check out the interview on This Week in Photo.

Xyza has been documenting life in Hong Kong through a unique perspective: she worked as a second-generation migrant domestic worker for nearly a decade. When she shifted to documentary photography, this perspective enabled her to develop an interest in shedding more light on the issues and mostly untold stories about the migration divide today.

“When I transitioned to documentary photography, I realized that photography is a medium that I can utilize to tell underreported stories. As a child of a migrant worker and a migrant myself, I have insights into both sides of the migration divide. My motivation is knowing that my works have become a platform for these untold stories.”

Facing the Complexities of Migration

“Migration is very complex,” stressed Xyza, and it can’t be more true than at this time and age. The choice to be a migrant worker is one borne out of financial necessity, often taking precedence over its impact on both the individual and the family left behind. Yet, much of the world remains either oblivious or indifferent to the realities they face. According to a May 2019 research by Marie Dorredam and Charles Agyemang, there are:

“Despite the beneficial effects of international labor migration, migrant workers face many challenges, including modern slavery, discrimination, contract violations, abuse and exploitation, and unsafe working conditions, which are often dirty, demeaning, and dangerous,” the researchers stressed. Furthermore, it mentioned that millions of migrant workers, especially those with low-skilled jobs, are at risk of severe effects on their physical and mental health. It’s these complexities and the vulnerability they cause that Xyza brings to light through her photography.

Xyza’s ideas and efforts came into fruition as We Are Like Air, which took two years to put together. “My initial idea is to create a book that will attempt to understand the complexities of domestic worker migration in the Philippines to Hong Kong,” she said. Apart from being a social commentary, the book also proved to be an opportunity for an introspective look at her own personal story. “I have been documenting migration in different cities but I never really pointed my lens towards my family. I decided that it’s okay to be vulnerable, and that vulnerability helped photograph my loved ones.”

We Are Like Air alludes to the often unrecognized fact of migrant workers and their contributions to the world’s most affluent societies: they are often treated like air, invisible but vital. The March 2019 TIME report also mentioned that “domestic workers also play a key role in increasing the city’s female workforce participation by relieving women of childcare responsibilities during the daytime. This ultimately allows many households to earn a higher income and increases overall financial well-being.”

Likewise, their personal stories, invisible as they may seem, are important. “I think it’s understanding that migrants are more than their jobs, that they are just like everyone else,” Xyza said on the often misunderstood realities of life for migrant workers today.

“They are also mothers, sisters, daughters, wives, and they have their life beyond their livelihood. There are tons of stereotypes with migrants and it affected me as an individual. I felt ‘the othering’ from certain situations. I hope we just see them as humans just like everyone else.”

In her book, Xyza assembled a personal retelling of the migrant domestic worker’s story through eight chapters of stories that intertwine with each other. “The narrative follows the story of my mother, my family, and seven other stories. It explores the stories of love, families, and sacrifices. It’s very personal. Very close to my skin.”

The events, circumstances, and experiences surrounding these stories may be subjective and personal. When she traverses them, Xyza makes sure to remain objective to ensure her work is as eye-opening as possible. “I document what is happening in front of me. I need to have zero judgment when I document stories. To be open to who they are and hope that the images will show that intimacy and respect.”

“All the stories that I have done are memorable for me. I’m still in touch with most of the people I photograph,” she said when asked about the compelling stories she has done so far in her years as a documentary photographer. Projects like We Are Like Air allow her to explore stories from a multi-faceted perspective, so it’s easy to see how each story is unique and affects her differently. “For them to share their life with me and allow me to share it with the world, that makes them all compelling. I’m super lucky and grateful for their generosity.”

“I seek stories that I’m curious about, stories that make me feel,” Xyza said on what she strives to uncover with every project she pours herself into. So, it was only a matter of time that she would put together We Are Like Air, guided by her very unique view as a child of a migrant worker and now a migrant herself.

“It made me a better human being. It taught me to be more patient and grateful. I realized that it’s okay to be vulnerable,” she said on how consolidating her work into We Are Like Air impacted her as a photographer. “Looking at the photographs, exercising vulnerability can be exhausting but I’m very lucky that WMA Commission (who commissioned the book) and my publisher provided me with a team that helped me in every step. The fact-checking was rigorous. It took us 13 versions before we finally ran it.”

“I took this photo in 2013 when I was still working as a migrant domestic worker in Hong Kong. This is the balcony of my former employer’s home and I took this from the inside,” Xyza said on the cover image for the book. “The birds that time represented my longing for freedom and being able to do what I love the most, which is photography. But because of the nature of my work and bound by responsibilities, all I could do was watch from a glass wall. I chose this as a cover because it fits the title We Are Like Air.”

Since the book came out in December 2018, Xyza has found it cathartic not only on a personal level, but also for her family. “Personally, the book has healed a lot of wounds in our family. I love that migrant workers, their families, and their employers warmly reacted to the book,” she noted. “It also reached different institutions and people. For me, there are more things to be done but we did a good job.”

As part of projects like this book, she also reaches out to everyone to get the word out about her cause. “I don’t have control over who sees my work. I try my best. I did a lot of exhibitions, teaching, talks, workshops for the migrants and children, and speak with people who are in the position to do something for the community.”

Xyza Cruz Bacani is a Filipina author and photographer who uses her work to raise awareness about under-reported stories. Having worked as a second-generation domestic worker in Hong Kong for almost a decade, she is particularly interested in the intersection of labor migration and human rights. Today, she is known for several exceptional achievements garnered by her outstanding documentary photography.

She is one of the Magnum Foundation Photography and Social Justice Fellows in 2015, has exhibited worldwide, and won awards in photography. She is also the recipient of a resolution (HR No.1969) passed by the Philippines House of Representatives in her honor. Xyza is also one of the Asia 21 Young Leaders (Class of 2018), the WMA Commission grantee in 2017, a Pulitzer Center and an Open Society Moving Walls 2017 grantee. She is one of the BBC’s 100 Women of the World 2015, 30 Under 30 Women Photographers 2016, Forbes 30 Under 30 Asia 2016, Fujifilm ambassador and author of the book We Are Like Air. She is represented by Redux Pictures New York City, USA and Christine Park Gallery: London and New York.

Xyza, also a Fujifilm ambassador, has found an ardent advocate in the company through the years. “Fujifilm has been generous in supporting my works. By using their cameras, I’m able to focus more on the storytelling part because the Fujifilm cameras are super user-friendly. I fell in love with colors again when I started using the GFX50S and GFX50R medium formats.”

With her photography being both a personal and social endeavor, Xyza is driven to tell stories that reflect her experiences and the community that serves as the driving force behind her work. “I document, witness, gather the facts, publish the stories, and just hope for the best that the works will have an impact on the community.”

While documentary photography is primarily objective, creative and artful approaches allow photographers like Xyza to tell their stories differently, especially when it comes to commonly explored themes in the genre. For this, both the inspiration she finds from her family and consuming different mediums of art are instrumental to her style and storytelling approach. “I watch movies, read books, go to museums. Photography is visual, and by using the different elements of design, I’m able to be creative. I also develop my visual style with the help of mentors who were very generous with their knowledge and experiences.”

Asked about what she hopes her photography legacy would be, Xyza has a short but poignant answer. “Legacy is such a heavy thing to think about but I hope that people will be kinder to migrants and each other because of the stories that I did.”

What momentum do you want to start?

It’s amazing how a single thought, action or personal passion can ignite something that can make a difference. As a fellow photographer, we invite you to share what drives you… what do you want to get started, build momentum to? It starts with you. Share your visual social stories with #visualmomentum.

Editor’s Note: This is a sponsored blog post from Fujifilm.

FUJIFILM North America Corporation (Fujifilm) is empowering photographers and filmmakers everywhere to build their legacies through sharing their stories. Grounded in its 85-year history of manufacturing photographic and cinema film, pioneering technologies in lenses and coatings, and driving innovation in developing mirrorless digital camera technologies, Fujifilm continues to be at the center of every storyteller’s creative vision.

With a Fujifilm digital camera at your fingertips, you can seize the moment, share your story and build your legacy. Learn more on our website.

This article first appeared and was provided by our friends at The Phoblographer.