This 4K Aerial Film Features Cities from Across the United States, Shot Entirely on iPhone 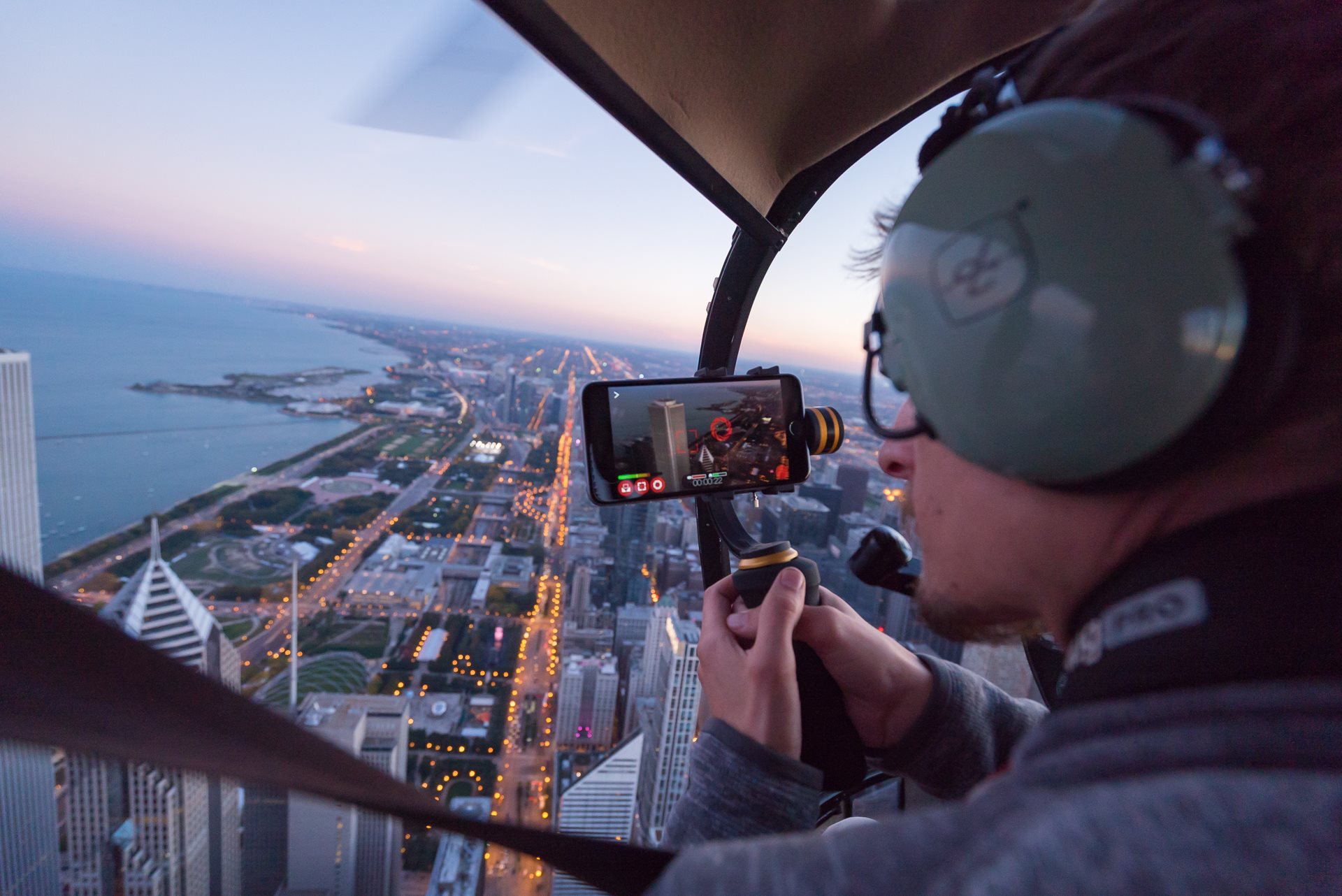 In addition to being the editor here at Resource Mag Online, I am also a filmmaker based out of San Francisco. For the last few years, my friend Toby Harriman and I (and our creative content agency Planet Unicorn) have really wanted to make an aerial film that featured some of our favorite cities from around the United States. The problem was, we didn’t really have the budget to make what we wanted to make… until the iPhone 6s came out last year. Both Toby and I are used to shooting at minimum on a Panasonic GH4, and at most on a RED, so our standards for video quality are pretty high. That’s why we were so blown away by what the iPhone could do.

And it could do plenty.

The idea that we could shoot something like this on a cell phone was among the “totally absurd” concepts not too long ago, and before Toby and I had our hands on the latest iPhones, we would have totally dismissed the idea as foolish. But we have to applaud Apple here, because the quality of the video footage out of these iPhones is downright amazing. We were getting as good or better quality from the iPhone as what we had been shooting on for the past year, the Panasonic GH4. 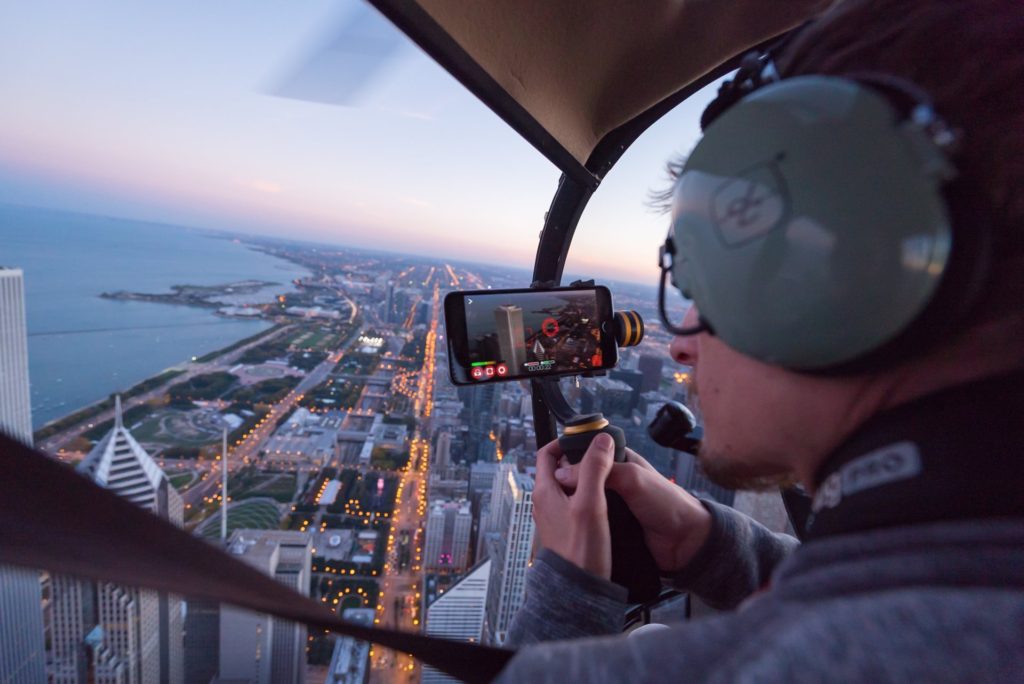 Toby Harriman, high above Chicago while shooting for “Flying into Dusk.” Photo by Austin DeWees

Behind the scenes look at Toby filming out the open door of a Robinson R44 helicopter. By Brett Phillips

Add to that, we worked closely with the awesome team at Filmic Pro to get the latest and greatest version of their filmmaking app. Filmic Pro allows you to record at the maximum ability of the iPhone, and far better than the standard video recording app that Apple packages with the camera. With 100 MB/s recording, we were getting double the data rate out of Filmic Pro than we could using our GH4, and that resulted in really stellar looking 4K footage.

When we realized we could get incredibly stable high-quality footage with such a small camera, we knew we had what we needed to finally make our ideas come to life.

For this project we wanted to keep our kit as small as possible to really take advantage of how compact shooting on the iPhone is. We really only needed two pieces of gear: the phone, and the Ikan Fly-X3 stabilizer gimbal. It’s designed specifically for iPhone (and GoPro) and requires no balancing or calibrating. Simple, fast, and extremely effective. -Planet Unicorn Blog 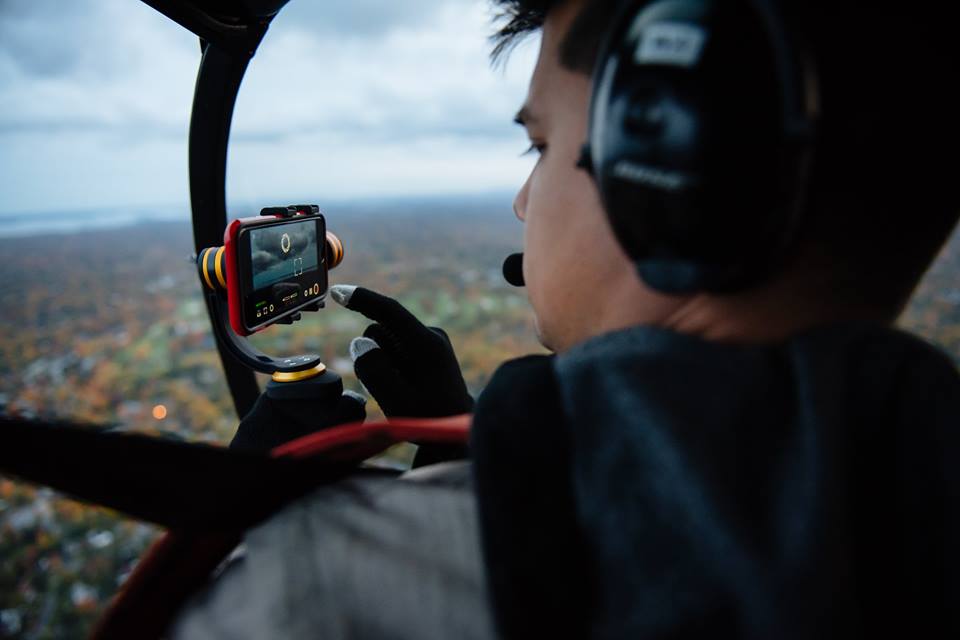 We flew over San Francisco, New York, Chicago, Los Angeles, and Boston. These are, of course, not the only cities we wanted to hit, but they were the ones that worked for us, as this project was self-funded and renting helicopters repeatedly is expensive. We chose to fly in cities that we liked, and that we happened to be near for other jobs that we were on. It helped keep our travel bills low, and we just shot as much as we could.

Behind the scenes look at Toby filming out the open door of a Robinson R44 helicopter. By Brett Phillips

For the full breakdown of how and why Toby and I chose to shoot in the cities we did, please check out our behind-the-scenes blog over on Planet Unicorn.